A new UN High Commissioner for Human Rights has just been appointed - Prince Zeid, Jordan’s UN Ambassador in New York. He will need to move quickly to improve the visibility and viability of the Office’s mandate in a changing global environment. 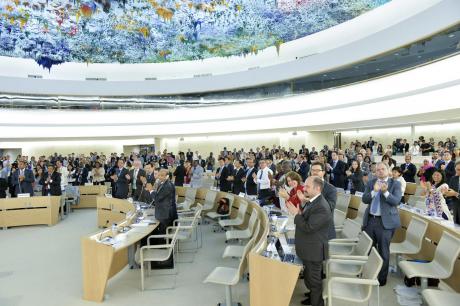 Standing ovation of the participants during Closing Ceremony of the End of Tenure of the United Nations High Commissioner for Human Rights, Navi Pillay at the 26th Session of the Human Rights Council. 27 June 2014. Flickr/Jean-Marc Ferré (UN Photo). Some Rights Reserved.

The High Commissioner is expected to take the UN lead in protecting human rights worldwide, even as he must also support the work and respond to the demands of the politically driven UN Human Rights Council. Reporting to the UN Secretary-General, the High Commissioner is also expected to act as an independent voice, able to speak out even (perhaps especially) when it’s inconvenient for the UN. It’s a difficult balancing act, shown by the fact that no UN High Commissioner for Human Rights has served the full 8 years allowed. Thus, rather than rushing to judgment on a tenure completed, perhaps it would be more constructive to look ahead. What should be Prince Zeid’s key priorities?

Here’s an initial list, of both do’s and don’t’s:

This article was first published on the oGR Blog on June 7, 2014.