The human rights movement, the democracy-promotion community, and development donors have common goals, but they have not always seen themselves as allies. It is quite possible that the three groupings have found more common ground around the concept of a “rights-based approach” to development.

Development thinking has evolved over the years, but it often reaches back into history to refashion old concepts. I saw this happen time and again in my six years as administrator of USAID and more recently as chair of the OECD Development Assistance Committee (DAC), the body that coordinates policy among the major donors. The phrase “rights based” is an example. It combines an appreciation for the importance of civil society and human rights with the more accepted notion that an accountable and effective government is vital to sustained development progress.

A successful development program is one that focuses on governments’ capacity to respond to citizens’ needs and on citizens’ capacity to exercise fundamental rights and hold government accountable. Donors have long struggled with striking the right balance between these objectives. Their principal point of contact, the host government, tends to be fearful of nurturing institutions not under its control. This is particularly true in fragile states where governments struggle to perform the most fundamental roles of the state.

According to OECD/DAC reports, of the current $125.6 billion in annual net official development assistance (ODA), 10 percent is spent on governance, of which about 6 percent is allocated to human rights activities. This “marker” was added after the 2008 report on human rights was released; however, the United States at the time had little interest in this statistic. That now has changed, and donors, including the U.S. government, are reporting on human rights projects much more conscientiously. The ODA tracking system is not perfect, in that donors have some leeway concerning what they report, but there is likely to be more granularity in the future and these annual reports provide an important benchmark for purposes of comparison.

In the not-so-distant past, donors who wished to work with civil society found it difficult to find experienced capacity builders. Human rights organizations were opposed to accepting grants to build local capacity, and democracy groups were not yet oriented to doing long-term development work. This was further complicated by tension between human rights and democratic development organizations.

This tension was well documented by Thomas Carothers in an article titled “Democracy and Human Rights: Policy Allies or Rivals” (The Washington Quarterly, Vol. 17, No. 3, Summer 1994). Carothers observed that “by definition promoting democracy entails promoting human rights and conversely that promoting human rights is a form of promoting democracy.” Yet for a variety of political and ideological reasons the two communities were at loggerheads. Human rights organizations are interested in “international legal norms,” Carothers wrote, “whereas democracy is a political ideology.”

The relationship between these communities was formed during a period when the Administration of President Ronald Reagan refused to use the words “human rights,” a phrase conservatives associated with his predecessor, President Jimmy Carter. Later in his administration, Reagan gave a major address at Westminster in London stating that it was an obligation of all democracies to support nations struggling to build democratic institutions. Many liberals interpreted this to mean a form of “political intervention,” and, in the case of Central America, to justify support of governments that, while elected, continued to abuse the human rights of their people. Certain organizations that formed during this period – including one that I led for eight years, the National Democratic Institute – were careful to work only in partnerships with indigenous democracy and rights advocates, but many in the human rights movement remained skeptical. Democracy promotion was perceived as the ideological counterpoint to communism rather than the path to improved human rights.

It would take time and the end of the Cold War before these two poles would begin to converge. In the meantime, donors that wanted to pursue grassroots development were left to pursue capacity building with very few tools. They did so with great caution, often using professional organizations with little knowledge of political institutions or community organizing. Human rights organizations remained at arm’s length, preferring to report abuses to the international community rather than engaging in direct capacity building.

An evolution in thinking

A 2007 DAC report reflects an evolution in development thinking: a convergence of human rights and development that had been 10 years in the making. The report lists 10 principles the committee adopted – important guidelines, but largely passive in nature. It recommends “dialogue” with the host government, the “safeguarding of rights in processes of state building,” supporting the “demand side,” promoting non-discrimination, and considering “mutual reinforcement between human rights and aid effectiveness principles.”  This reflected a willingness to endorse the importance of human rights to development, but the consensus had not yet formed that would suggest specific programmatic measures.

During my term as administrator of the USAID in the 1990s, new ground was broken in the form of the integration of democratic governance as an integral part of development cooperation. Before that the work of the agency and other development institutions was defined exclusively as social and economic development.  This was in part designed to insulate the mission from “political” activity. The creation of a Democracy Center, and the hiring and training of “democracy officers,” further institutionalized and legitimized this work. These changes were more controversial than they should have been in that that they represented an important policy assertion that economic progress cannot be sustained without inclusive political institutions that facilitate citizen participation.

Democratic development organizations were active in the late ’80s and early ’90s, but human rights groups maintained their distance from government donors until relatively recently. Some to this day believe that objective research and advocacy efforts are compromised if they accept any government resources. However, a few have now accepted donor funds in order to directly support human rights defenders and awareness programs. They have taken steps to demonstrate that accepting such funds would not stop them from criticizing the very governments that support them.

While some partner governments continue to feel threatened by well-organized civil society movements and are resistant to outside donor support for such groups, many have recognized that inclusive institutions contribute to a healthy society, produce entrepreneurs and attract investment. Partner governments are under increasing pressure to provide more “space” for non-governmental organizations. Concern about this and increasing inequality within societies are behind the movement for a “rights-based approach.”

Inequality in both developed and developing countries is growing and remains a serious development challenge. The UN Development Programme’s 2005 World Development Report referred to the “unequal access to resources and distribution of power within and among nations.” The report concluded that “unless these inequalities are corrected, the first principles of the Millennium Declaration [adopted by the United Nations in 2001] from which the Millennium Development Goals are derived – commitment to social justice, equity and human rights – will not be translated into progress in human development.” Human rights organizations are keenly sensitive to these issues.

The adoption of the so-called Paris principles in 2005 saw the development paradigm shift to promoting the concept of “country ownership.” Civil society organizations have begun to experience an unexpected consequence of this as some partner governments began to interpret this as endorsing their role as exclusive of civil society. The DAC provided a vehicle for redressing that concern. The series of DAC-sponsored conferences on aid effectiveness that included the Paris meeting culminated in a major international meeting of governments and civil society in Busan, Korea, in 2011. This was the opportunity civil society needed to drive home the point.

Human rights organizations joined a broad-based alliance called Better Aid, and pushed very hard in negotiations on the outcome document to include references to the rights of citizens. They won the day. Most important, they established the principle that the phrase adopted at the Paris meeting, “country ownership,” did not simply mean “government ownership” but rather ownership by the entire society. 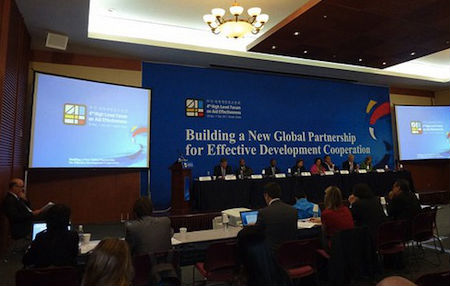 Creating a civil society fully capable of holding government accountable and defending citizen rights requires education and training. Donors, the democracy community, and human rights organizations have responded to this by increasingly working together with host governments to build capacity at the grassroots level. In 2008, the United Kingdom’s Department for International Development provided a four-year grant to Amnesty International totaling £3,149,000 (per NGO Monitor, June 4, 2012). The Dutch government and Scandinavian donors also have been funding human rights programs generously to train counterparts in developing countries. And in June of this year USAID released a new strategy on democracy, human rights, and development that calls for more human rights education as the agency made “human rights an explicit component” of its approach to democratic development.

The journey from the time donor agencies worked only on the social sectors and economic growth to today’s concern about inequality and the rights of citizens has not been an easy one. Three short decades ago governments only reluctantly placed human rights on the diplomatic agenda. Today, the link between development and respect for human rights has become an important international norm and part of the international dialogue. Even if belatedly, donors and their partners are beginning to overcome their long-held reluctance to work with one another to build democratic institutions and human rights capacity through training programs.

The human rights and democracy communities have largely accepted that they are the opposite sides of the same coin and that their fledgling alliance benefits development. A “rights-based approach” to development will in the end make governments more accountable to civil society and strengthen the bond between citizens and their representatives.

J. Brian Atwood chairs the Global Policy area at the Humphrey School of Public Affairs at the University of Minnesota, and is a former head of the US Agency for International Development, and the OECD’s Development Assistance Committee. He recently led the US delegation to the Organization for Security and Cooperation in Europe’s annual human rights meeting in Warsaw.