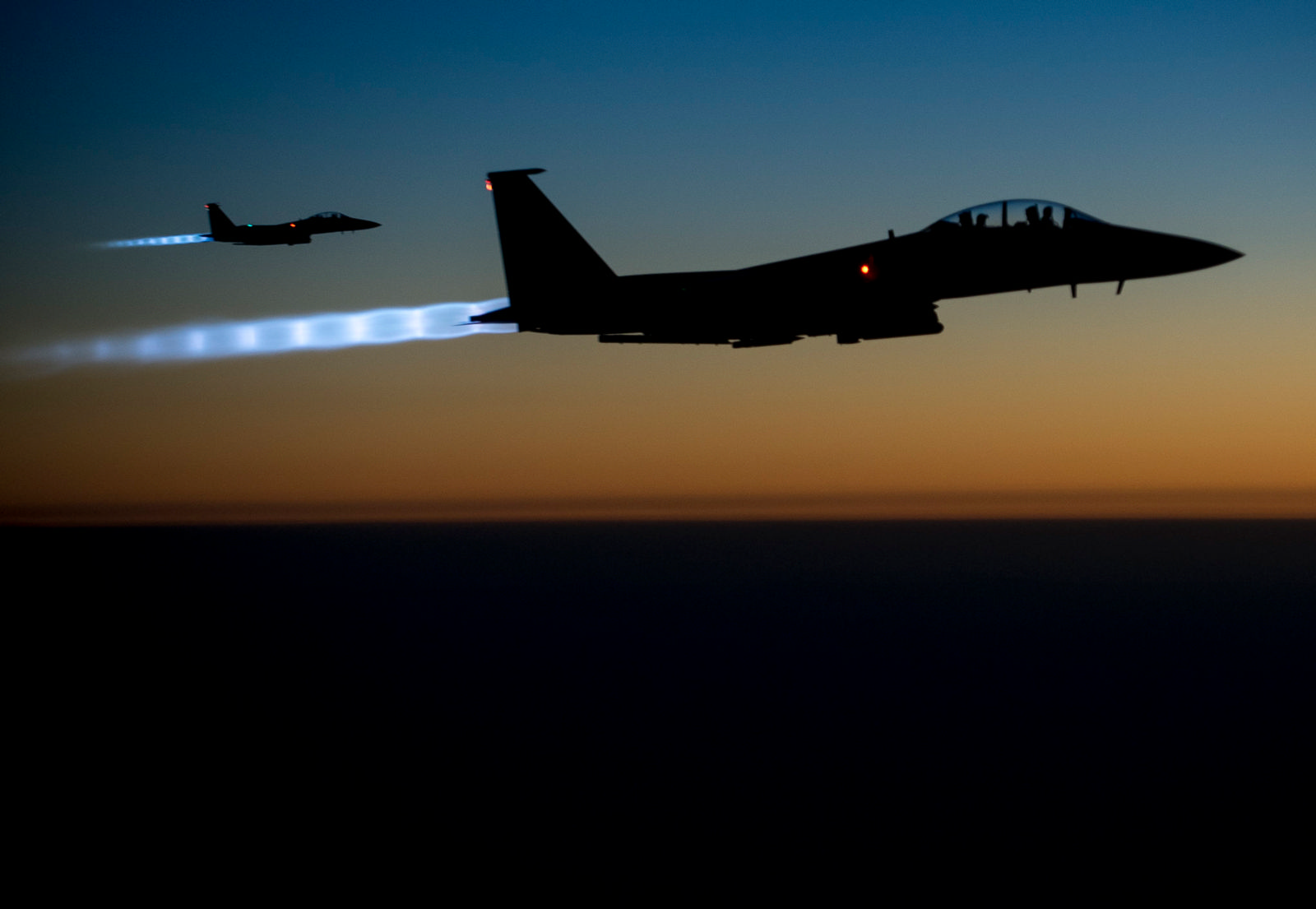 Since President Trump entered the White House, US drones and bombers have stepped up strikes on suspected terrorists in Africa and the Middle East, which have also been killing civilians. We looked into Americans’ attitudes toward airstrikes and found that, with the reminder that such strikes kill civilians, a majority of Americans oppose them. Even those who do support such use of force become more likely to oppose the strikes if told that military leaders oppose them.

US airstrikes have increased, with mixed public response

According to the monitoring group Airwars, US-led airstrikes in Iraq and Syria killed 7,745 to 12,561 civilians from August 2014 to April 2019, including as many as 2,296 children. Comparable numbers are likely for Afghanistan, Libya, Somalia and Yemen. On May 2, however, the Pentagon countered that the figure was much lower, only 120 civilians in 2018.

How do Americans feel about such airstrikes? Polls have shown that Americans support airstrikes against suspected terrorists—with caveats. In 2015, for example, the Pew Research Center found that 58% of the US public approved of “US drone strikes to target extremists.” That same poll also found that 80% of Americans were either “very” or “somewhat” concerned that drone strikes might “endanger lives of innocent civilians.” As Sarah Kreps, at Cornell University, notes, most polls hardly mention civilian casualties, which likely means they’re finding artificially high levels of public support.

To investigate Americans’ attitudes toward air war casualties, we hired YouGov, a leading online survey provider, to poll 3,000 US adults. Of these, 2,000 represented the general US population (with appropriate weighting techniques), while 1,000 represented Trump supporters, defined as Americans who had voted for Trump in the 2016 primaries.

Our survey explained that “US airstrikes support the war on terror and protect American lives, but also kill some civilians.” We then added a policy statement: “The US should not use airstrikes if it means killing innocent civilians,” and asked, “What do you think?”

As you can see below, consistent with Pew’s 2015 survey, almost two-thirds of our general population sample agreed that “The US should not use airstrikes if it means killing innocent civilians.” This supports the argument that if the American public had better information on the air war’s civilian toll, many would oppose current strike policies.

Of the hardcore Trump supporters, however, only 26% agreed that civilian-killing airstrikes should be banned. When we removed the 500 early Trump supporters from the general population sample, 75% of the remainder opposed airstrikes that killed civilians. 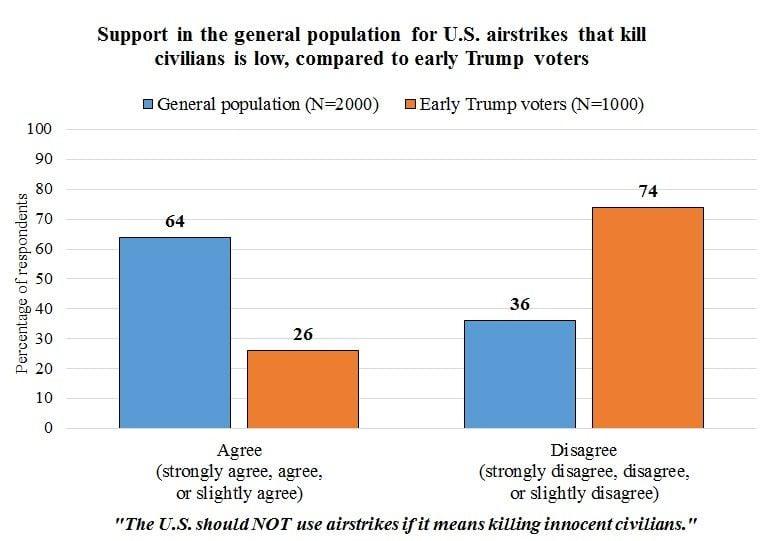 What other attitudes were associated with pro- and anti-airstrike positions?

Next, we used statistical techniques to see what characteristics and views were correlated with support for or opposition to anti-terror airstrikes that kill civilians. We controlled for a wide range of factors, including age, race, education, socioeconomic status, gun ownership, level of political engagement, trust in the military, and more.

Strong Republicans were 12% more pro-strike than strong Democrats. Other factors also mattered. For instance, those who most wanted to restrict immigration—supporting limiting refugees and immigrants from entering the United States, banning Muslims and deporting undocumented migrants—had 25% greater support for airstrikes than did those with the opposing views. We also measured a concept called “white vulnerability,” defined as believing that whites are “economically losing ground” and “discriminated against.” Those who felt this way were 16% more pro-strike than those who did not. Finally, those who scored high on racial resentment—defined as believing African-Americans could succeed if they only tried “hard enough,” and rejecting the idea that a history of slavery and discrimination continue to hold blacks back—were 14% more pro-strike than those who did not.

This is consistent with findings of other research. For example, Michael Tesler showed that such attitudes about race are associated with greater military hawkishness. Cindy Kam and Donald Kinder have found that when white Americans harbor feelings of ethnocentrism and opposition to racial minorities, they are also more prone to support US military action abroad.

We conducted a messaging experiment in the survey, randomly varying the basis of the argument against the use of airstrikes and the messenger making the argument.

Trump supporters were more likely (by 12%) to oppose airstrikes that kill civilians when told that military leaders argued against them. Citing US human rights organizations changed their minds a bit, but by less (4%). And when we told them that “some people say that it is often against international norms and treaties to kill innocent civilians,” Trump voters moved 5% away from their pro-strike views. That’s consistent with what Kreps found.

Our research suggests that if Americans were better informed, they would likely oppose the current airstrikes policy by a large margin. Moreover, strong Trump supporters can be persuaded to moderate their views with appropriate messaging. To change current policy, citizens must be reminded of the human cost of airstrikes, aiding their ability to engage in moral decision-making in the “global war on terror.”

This piece was previously published in The Washington Post on May 6, 2019.