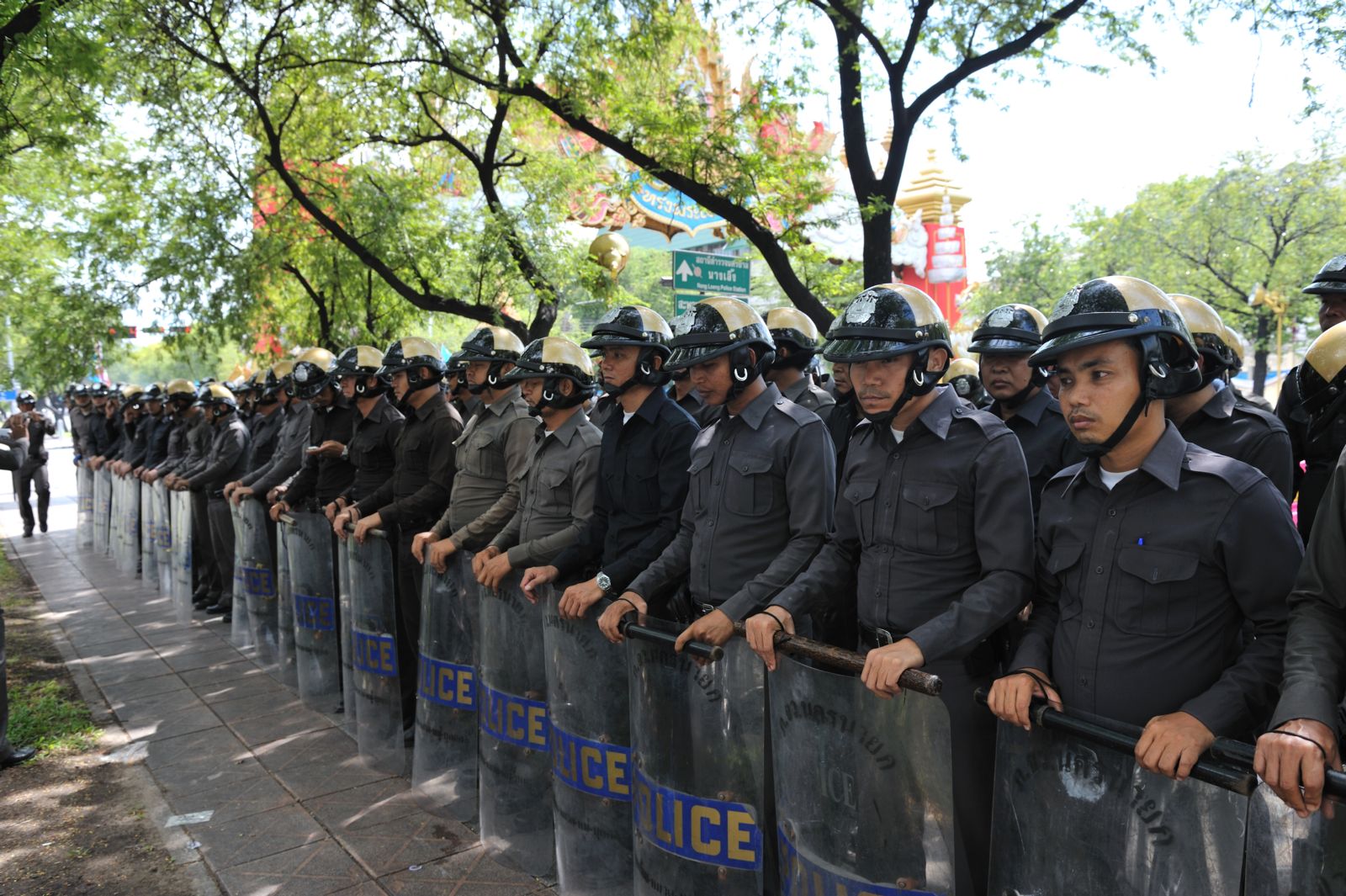 Police response during the anti-government protests in Thailand, 28 August 2008. These policemen were lining up on Ratchadamnoen Nak, just down the street from the Makawan Bridge, which was the main entrance to the protestors zone.

Does foreign aid promote human rights? The relationship between foreign aid and human rights is still an understudied research topic. Very recent studies have highlighted that United States (US) foreign aid does not necessarily promote human rights, and is likely detrimental.  However, other researchers contend that aid could empower not only the coercive capacities of recipient governments, but also their political resolve to increase domestic state repression.

Yet a quintessential element of the US exceptionalist narrative upholds that American foreign policy—its public diplomacy and foreign aid strategies—effectively promotes stronger human rights norms in partner countries. If that were the case, especially amidst the decreasing political willingness of the current Trump administration to fund longstanding US foreign aid programs, then understanding these links is crucial—both for scholarly reasons and for their significance in global governance and foreign policy debates.

In my newly published peer-reviewed research, I ask whether American public and foreign assistance programs promote physical integrity rights in recipient countries—and, if so, how and under which conditions they interact with each other. My research acknowledges that any kind of investigation about foreign aid’s political consequences must go beyond the quantifiable and measurable amounts of military and economic aid found in openly accessible data. I posit, instead, that the shared political discourses and publicly stated policy preferences of donor and recipient governments are also informative in regard to how and in what ways foreign aid is most likely to be used. Thus, it is analytically productive to study the impact of foreign aid in conjunction with the discourses, ideas, and publicly stated preferences. These ideas and discourses reflect the underlying intentions, causal expectations, and priorities of leaders in both donor and recipient countries.

To investigate these questions, I studied the informative case of post-9/11 United States foreign bilateral relations with Thailand under Prime Minister Thaksin Shinawatra. The case study showcased how aid can be used for aims that are way beyond what has been publicly intended by the donor government. As one of the only two Mutual Defence Treaty allies of the US in Southeast Asia, Thailand had a relatively long experience with electoral processes and liberal democracy compared to many of its neighbors within the region.

Amidst the end of the Cold War, the general direction of US foreign policy focused on democracy promotion, economic development, civil society empowerment, and a wide range of militaristic and non-militaristic priorities. Yet, the 9/11 terror attacks in the US motivated the Bush administration to launch an international war on terrorism, leading to renewed and strengthened military cooperation with new and old allies alike. The Bush administration’s foreign aid programs and international public diplomacy also reflected such a focus on counterterrorism and military security, both of which were triggered by the 9/11 attacks.

During the 1990s, Thailand received relatively low amounts of US military and economic assistance, with an annual average amount of USD$22.5 million for the period 1993 to 2001. That annual average amount doubled, however, to as high as USD$50.3 million for the period 2002 to 2009. This sudden increase in US foreign assistance can be attributed to Thailand’s perceived strategic importance at that time in curbing armed Islamic extremist terror movements in Southeast Asia, a region that was dubbed as the second front in the war on terror.

Based on an intensive case study of hundreds of open-source primary and secondary source materials, my research indicates the following findings from Thailand. First, deviating from the publicly stated aim of the Bush administration that foreign aid should be used in targeting non-state armed terror movements, the Thaksin administration mobilized domestic resources as well as terror-oriented foreign aid in increasing domestic state repression against unarmed civilians. For instance, in 2003, the Thaksin-led government implemented its “war on drugs”, in which state forces arbitrarily harassed and killed at least 2,500 unarmed civilians during the first three months of the campaign. Thai government agents merely suspected these victims as drug addicts, local political dissidents, or as “undesirable civilians”. Thai civilians were also killed in increasing numbers as collateral damages from increased counterterror operations in the southern parts of Thailand.

Second, the Thai government justified such repressive actions through the power of terror-oriented discourses and various rhetorical strategies that capitalized upon international public anxiety triggered by the 9/11 attacks. Specifically, Thaksin and his allies branded both unarmed and armed political dissidents as “dark influences” who need to be eliminated. Aside from activists and peaceful political opposition members as targets of state violence, the Thaksin-led government branded any individual associated with gambling, smuggling, and illegal logging, as part of a list of fifteen other crimes linked with “dark influences”. In an effort to localize the global war on terror, Thai government agents and state-sponsored forces violently harassed and killed suspected individuals associated with “dark influences”.

Thaksin, whose political support base in rural areas was strong at that time, intensified domestic state repression of all forms of opposition in order to consolidate his fledgling political legitimacy. Amidst suspicion from Bangkok-based political elites and the Thai political establishment, the Thai government reframed the US-led war on terror as Thailand’s war on social ills and illegal drugs, a strategy that the government expected to consolidate Thaksin’s authority.

What does this case of US aid to Thailand tell us particularly about foreign aid’s relationship with human rights promotion? During periods of an intensified military security crisis, governments may be keen to increase domestic state repression in order to quell the perceived security threats. When governments perceive themselves as fundamentally weak, as it was in the case of Thaksin, domestic state repression is more likely to increase, and notably, unarmed political dissidents are likely to become targets of physical harassment and killings.

Donor governments should impose more effective accountability mechanisms in ways that aid does not easily become instruments for killing unarmed civilians. For example, reforming the implementation strategy of the Leahy Laws—which are meant to prohibit the US from aiding any foreign security forces known to have committed rights violations—could reduce the incentive of aid recipient governments in using foreign aid for human rights abuses. Instead of restricting the human rights vetting process of recipient countries to the US State Department, reforms are needed to include human rights observers, country specialists, and other human rights civil society groups. Indeed, the participation of these non-state stakeholders might ensure that the vetting process is subject to democratic procedures and more holistic assessm.

Salvador Santino F. Regilme, Jr. is a university lecturer of International Relations at the Institute for History at the Universiteit Leiden, the Netherlands. He is the co-editor of American Hegemony and the Rise of Emerging Powers: Cooperation or Conflict (Routledge 2017). Follow him on Twitter: @santinoregilme.