The current protests should come as no surprise in the face of such blatant disregard of the human rights of Black people and the systemic, institutional and everyday violence against them. 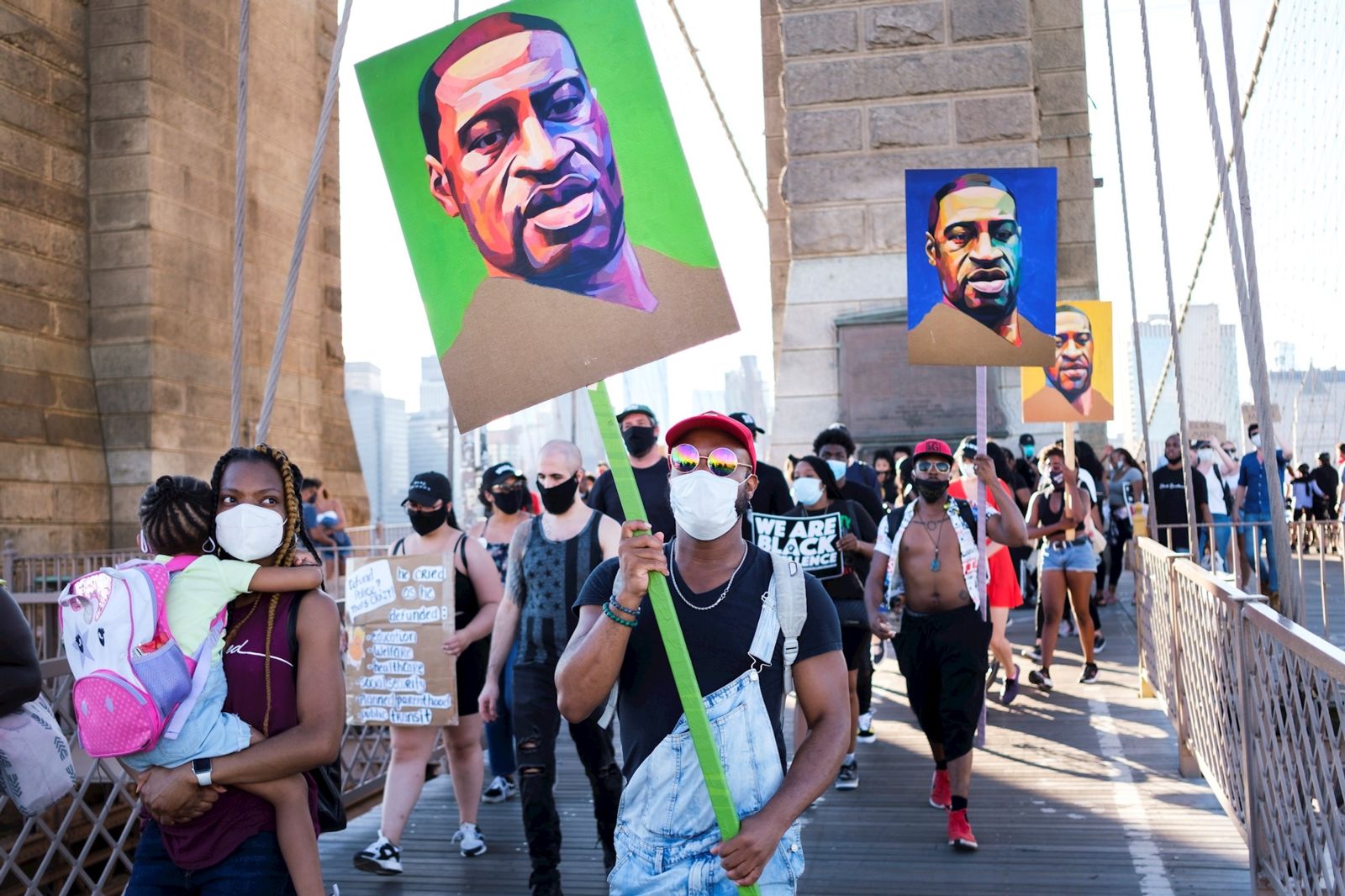 “Human rights are rights inherent to all human beings, regardless of race, sex, nationality, ethnicity, language, religion, or any other status...Everyone is entitled to these rights, without discrimination.”

This is the basic principle behind human rights, a fair and just society as affirmed by the United Nations and taught in any human rights class. The recent #BlackLivesMatter protests against police brutality and race inequality in the United States and across the world are first and foremost about the right to life—you need to be alive to enjoy other fundamental human rights, including the right to fair hearing. The circumstances that resulted in the deaths of George Floyd, Breonna Taylor and Ahmaud Arbery should not have resulted in the loss of their lives, regardless of suspected and alleged crimes. It is impossible to ignore the racial discrimination and human rights violations inherent in these situations.

The 1948 Universal Declaration of Human Rights (UDHR), the milestone document in the history of human rights, recognises the inherent dignity, equal and inalienable rights of all humans as the foundation of freedom, justice and peace in the world. Its preamble alone raises multiple reasons fuelling the protests. “It is essential, if man is not to be compelled to have recourse, as a last resort, to rebellion against tyranny and oppression, that human rights should be protected by the rule of law.”

The protests should come as no surprise in the face of such impunity and blatant disregard of the human rights of a particular race, with a history of systemic, institutional and everyday violence against Black people. Statistics mapping police violence show that Black people are three times more likely to be killed by police than white people, despite being 1.3 times more likely to be unarmed compared to white people. 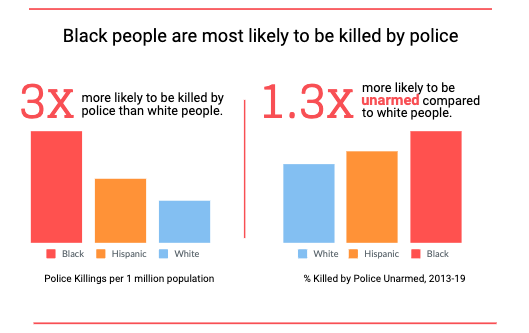 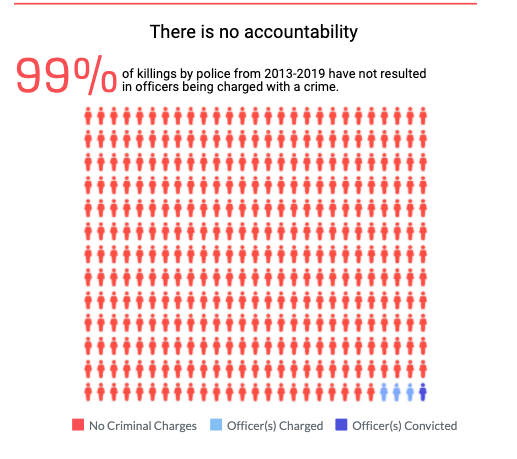 Image and Statistics from mappingpoliceviolence.org/

The recent movement has involved strong anti-racist sentiments calling for beliefs, actions, movements, and policies to be adopted, developed, and implemented in strong opposition to racism. While some find this strategy divisive, as it categorizes people into racist or antiracist blocs, others feel it is essential to strongly identify as one or the other. This is because the culture of silence and lack of acknowledgement of the circumstances are a huge part of the problem—not just in the US but also in countries like Canada, which often prides itself on being harmoniously multicultural.

The 1966 International Covenant on Civil and Political Rights (ICCPR) recognizes in accordance with the UDHR that the ideal of free human beings enjoying civil and political freedom, and freedom from fear and want, can only be achieved if conditions are created whereby everyone may enjoy his/her/their civil and political rights, as well as economic, social, and cultural rights. The UDHR, ICCPR, and subsequent human rights legislation guarantee the right to life, liberty, and security of person. They also guarantee that no one be subjected to arbitrary arrest, detention, torture or to cruel, inhumane or degrading treatment or punishment.

Particularly, they provide that everyone has the right to recognition everywhere as a person before the law, the right to an effective remedy by the competent national tribunals for acts violating the fundamental rights granted by the constitution or by law. All humans should be viewed as equal before the law and entitled without any discrimination to equal protection of the law and equal protection against discrimination and against any incitement to such discrimination.

Undoubtedly, the current circumstances in the United States contravene these human rights standards. While the protests draw attention to the experiences and realities Black people face in the US and around the world, more needs to be done to uphold these standards, promote and defend human rights and fight against their violations.

David Kaye, the UN Special Rapporteur on the promotion and protection of the right to freedom of opinion and expression, writes that this is the time for the United States, a promoter of rights and democracy abroad, to look within. He points out that contrary to its image, the US is no paragon of liberty and fundamental freedoms. Instead, “despite its rhetoric and its occasional leadership, the United States has long had its foreign-policy foot inside the human rights system and its domestic one firmly outside. Treaties and other international obligations that it calls upon others to keep are not even enforceable within the United States itself.” He attributes this to racism, white supremacy, and related issues within the country.

"The United States has long had its foreign-policy foot inside the human rights system and its domestic one firmly outside."
- David Kaye

A recent statement on the protests against systemic racism in the United States, issued by independent experts of the United Nations Human Rights Council, highlights that the protests reflect “public frustration and protest against the many other glaring manifestations of systemic racism that have been impossible to ignore in the past months, including the racially disparate death rate and socioeconomic impact of the COVID-19 pandemic and the disparate and discriminatory enforcement of pandemic-related restrictions.”

As the statement explains, the protests the world is witnessing are a rejection of the fundamental racial inequality and discrimination that characterize life in the United States for Black people, and other people of color. The statement also expresses concerns that the nation is on the brink of a militarized response that reenacts the injustices that have driven people to the streets to protest in the first place.

Reactions to the protests range from actions and expressions of support from individuals, organizations, and governments around the world to the president of the United States threatening more state violence and using language associated with racial segregationists from the nation’s past who worked hard to deny Black people fundamental human rights.

However, as the statement and sentiments around the world have pointed out, expressions of solidarity—nationally and internationally—are important but they are not enough.

Action is more important now than ever before.

“The true demonstration of whether Black lives do indeed matter remains to be seen in the steps that public authorities and private citizens take in response to the concrete demands that protestors are making.”

For everyone of all races, it is important to commit to educating ourselves on the issues. Awareness is important and even more than the expressions of support is to protest and/or direct resources to black, grassroots and civil society organizations working with Black people and other people of color. A particular highlighted need right now, aside from protests, statements and petitions, is donating to bail and litigation funds for those being arrested for protesting.

Another crucial area is addressing the institutional and systemic issues nationally and within the international system. Calls for reparations for both historical and contemporary racial injustice to be addressed by national policies, regulations and laws alongside international human rights law are becoming more urgent.

There have also been calls for genuine accountability for police violence, to defund or restructure the police, reduce military budgets, monitor and enforce institutional change and reinvest in other areas such as healthcare, education, housing, pollution prevention and other social structures, especially in communities that have disproportionately faced discriminatory state intervention.

Without a doubt, there needs to be genuine change and enforcement of law, policy and human rights for all.