A strategic partnership around military human rights between the University of Minnesota and the IIHL reveals the importance of interdisciplinarity and stakeholder knowledge. 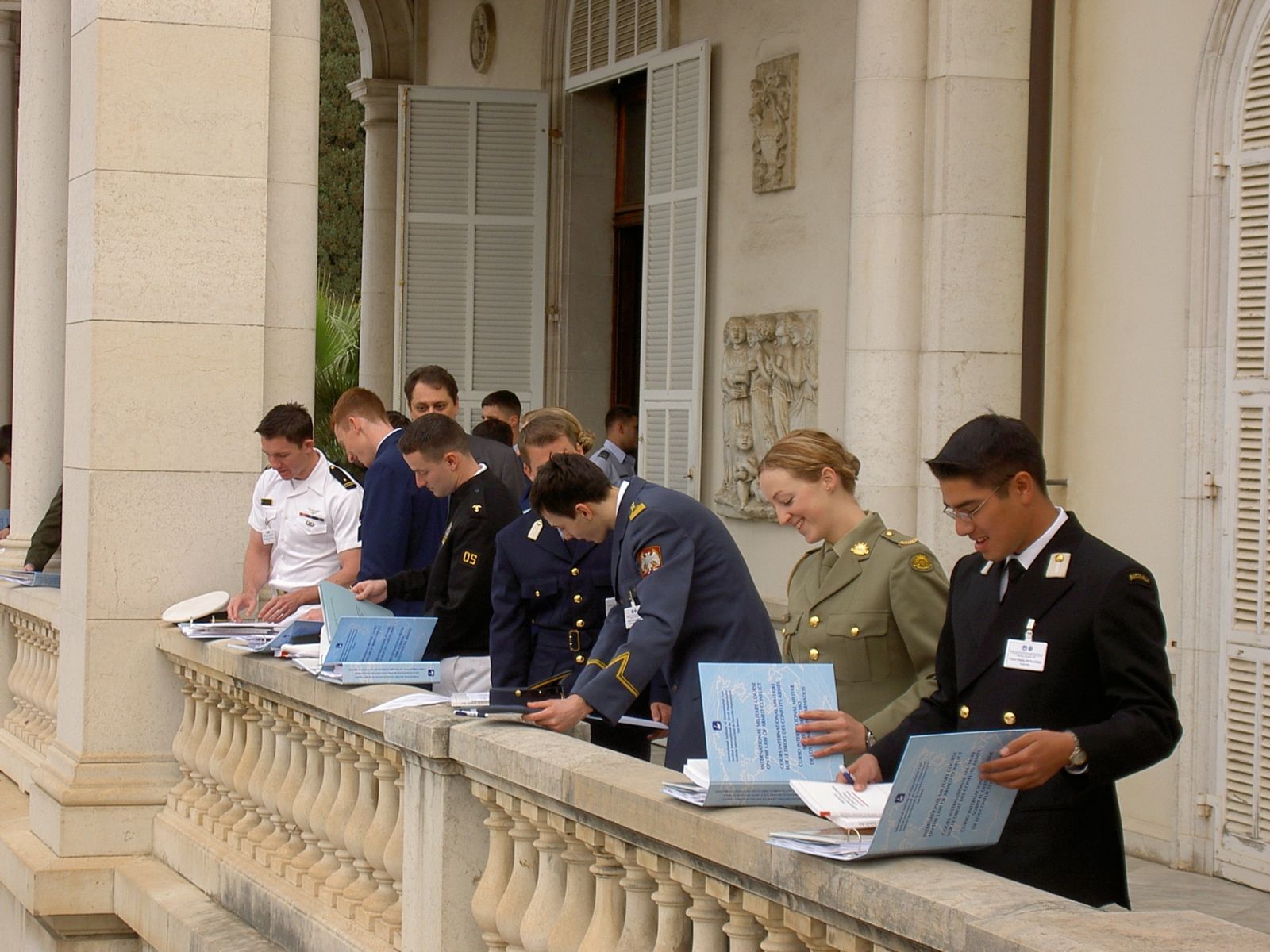 Participants in an International Military Course on the Law of Armed Conflict consult their training materials on the balcony of the International Institute of Humanitarian Law in Sanremo, Italy. Photo credit: IIHL.

When and how militaries should comply with obligations to protect individual human rights is a hotly debated issue. For the past two decades, a wide array of governments, militaries, courts, non-governmental organizations, and scholars have weighed in, resulting in a dizzying range of interpretations.

Some claim that the law of war—rules governing conduct during armed conflict—entirely displaces human rights law. Others maintain that there exists an overlapping relationship between the two bodies of law but differ strikingly in how they apply this complementary approach during conflict situations.

Existing research tends to focus on debates over what the letter of the law is or should be in this fragmented state of affairs. Limitations of this focus became apparent as we completed military training courses in Sanremo, Italy, at the International Institute of Humanitarian Law (IIHL), one of the oldest and most prominent international training institutes.

Having forged a collaborative partnership with IIHL practitioners, we realized that legal fragmentation plays out not only through treaties and on the pages of law journals, but also in the legal instruction received by soldiers. Every year, tens of thousands of military personnel are provided with specialized training on how to implement the Law of Armed Conflict (LOAC) in a variety of combat environments. These courses combine instruction and simulations to integrate humanitarian sensibilities into formal rules of engagement and the everyday culture of arms carriers. Such courses, largely non-existent even two decades ago, are today being offered by a vast number of entities—ranging from non-governmental organizations, to militaries and military alliances, to academic institutions and international organizations.

The Minnesota Model project we undertook developed out of the realization that the IIHL had no clear sense of the reach and impact of this global expansion of LOAC training. Moreover, while militaries and non-state actors have greater access to legal training than ever before, it is not at all clear which version of the law—and its relationship to human rights—they are internalizing. Our partners at IIHL expressed an urgent need to understand whether and how expansion of LOAC training contributes to divergent interpretations of the relationship between human rights and LOAC.

This knowledge gap presents problems for both human rights researchers and practitioners. If we do not have a sense of the legal training militaries receive, we cannot understand whose version of the law is guiding decisions on the use of force and protections afforded. This lack of knowledge also makes it exceedingly difficult for trainers to coordinate, share best practices, effectively allocate resources, and otherwise work together to promote legal compliance.

One of the project’s goals is to construct a database—part of which will become publicly available by early this year—that documents LOAC training institutes and courses around the world. The genesis of this research developed as a direct result of the needs of an on-the-ground practitioner. Indeed, training providers at other prominent organizations repeatedly affirmed the need for such a map of the field and expressed surprise at the fact that it did not yet exist.

If we do not have a sense of the legal training militaries receive, we cannot understand whose version of the law is guiding decisions on the use of force and protections afforded.

Over the past year, we have collaborated closely with IIHL partners, supported by an outstanding research team of undergraduate, law school, and graduate students. We surveyed a wide range of courses that provide practical training for militaries, policy-makers, journalists, and humanitarian activists. The ultimate goals of the project include helping interested human rights and refugee organizations connect with IHL training programs, unpacking major axes of interpretive fragmentation in the field of LOAC instruction, and developing workshops for trainers from leading organizations and militaries on fragmentation, overlap, and best practices in LOAC training.

Working hand-in-hand with a key stakeholder in this field revealed that true interdisciplinarity—and a genuine synthesis of perspectives—requires integrating disciplinary and stakeholder knowledge. Only through such integration could we begin to address the context-dependent effects of divergent LOAC training. Through our strategic partnership, we have been fortunate to participate in training courses and witness first-hand how training pedagogy shapes understandings of the law. We have also had the opportunity to converse with practitioners from around the world—both military and civilian—who are steeped in the realm of legal training and/or battlefield conduct.

Our findings to date make clear that interpretive disagreements between key state and non-state actors over the relationship between human rights and LOAC have made their way into the training provided to arms carriers around the world. Moreover, dominant interpretations held by international lawyers and institutions are not necessarily those incorporated into LOAC training programs. This suggests that researchers and practitioners should pay greater attention to military training programs as discreet forums for understanding the politics of international law at the intersection of LOAC and human rights.

Lastly, our research has revealed that despite the heavy involvement of dozens of organizations and tens of millions of dollars spent on these courses, neither researchers nor practitioners have a comprehensive sense of the extent to which such training actually affects legal compliance on the ground. This knowledge is of both practical interest to policymakers devoting considerable resources to these courses and theoretical interest to human rights researchers seeking to understand when and how people internalize legal norms.

During the next phase of this partnership, we intend to address this gap in our understanding of the effects and effectiveness of LOAC training by collecting systematic data on when and how such training shapes attitudes towards human rights. In doing so, we aim to facilitate extended dialogue between largely siloed human rights organizations and LOAC trainers so that they may better coordinate their resources and improve their practices.

Cosette Creamer is the Benjamin E. Lippincott Chair in Political Economy at the University of Minnesota Department of Political Science and School of Law.