Global institutions and principles now face their sternest test. Trump’s victory suggests human rights activists should devote themselves to the morass of domestic politics, not international law and norms.

Is this how it begins? With rage, with the demands of the entitled millions who feel their birthright has been stolen, with those who claim “we built this country, we fought its wars, when is it our turn?” Donald Trump is by any stretch of the imagination an awful candidate to be president of the most powerful state on earth, a sexist, racist, impulsive narcissist who lies with abandon and hates with fervour. His handlers don’t even trust him with his own Twitter account anymore. And now he is the standard bearer for an increasingly familiar social coalition, angry white working class men (and women) with weak formal education and weaker job prospects, along with disaffected white middle class conservatives, many of them religious, who are furious that they lost the culture wars. We’ve seen this coalition before: it’s a breeding ground for fascism. Liberals need to wise up and fast. The International Criminal Court (ICC), global human rights, international norms? These are sideshows. The battle is much more present and visceral than that now. It is the battle of democracy and in that struggle, human rights are too compromised by their association with the very liberal elite—exactly the elite that the Putin/Trump/Brexit coalition hates—to be a principal mobilizing banner. 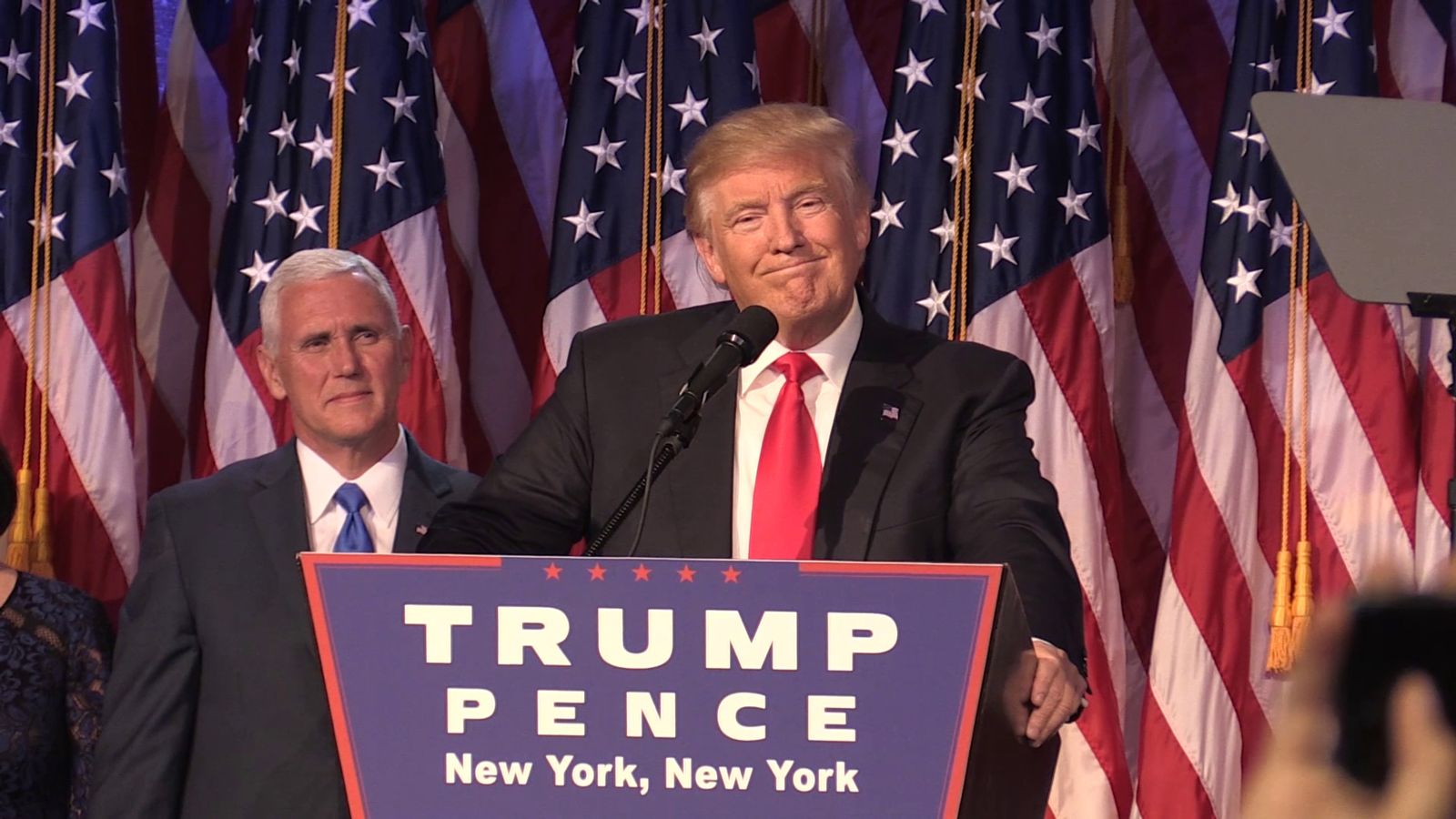 Donald Trump as he makes his acceptance speech in New York following his victory to become he 45th president of the United States.

For Trump’s constituency, his obvious and stupefying flaws are irrelevant. He’s a policy-lite hand grenade intended to spark a revolution. From his admiration for Putin to his authoritarian style, right down to the machismo, sexual bravado and contempt for minorities, the outlook for human rights in the US—let alone globally—under Trump is catastrophic. For his coalition, human rights are a shell game pushed by cosmopolitan liberals to steal the nation away from its legitimate, mainly white, heirs. Make no mistake about it, the right is on the move—in Britain, Hungary, Austria, Denmark, Germany, the Netherlands, Indiaand now, far more importantly than any of those, in the United States. If Marine Le Pen can win in France in 2017 then fascism will truly have arrived, just seventy years after we assumed it had been banished for good. Get those immigrants out, get those trade barriers up, put my nation first, and forever, crush those bespectacled intellectuals, demean the unpatriotic, wrap yourself in that flag and humiliate the non-believers. Trump even threw in a healthy dose of anti-semitism for good measure.

After Brexit, I argued that winter was coming for human rights. Well, it’s here.

It’s here because the liberal democratic market model that has underpinned forty years of human rights growth is broken. It is here because what was supposed to happen, trickle down affluence, never did in any meaningful way. The age of rights, four decades of a newly potent set of claims for dignity, equal treatment and protection—for civility, for vibrant opposition to authority—were built on what Trump supporters have come to see as a lie. For them, human rights were not heralds of a new era of fair shares for all but a way to steal the inheritance of real Americans. Of course human rights were not the drivers of this change, they were part of its ideology. What drove it was a massive democratic experiment in which millions of working class, largely white voters, those whose forebears—so their mythology goes—built the nation, were told to hang tight while the economy was modernized. Liberalize those markets and break that union power and we would all be free. For election after election, as millions lost out in this vast demographic transformation, where wages stagnated or fell, and cheap and even illegal immigration filled the service sector with low paid workers, a “precariat” grew whose everyday life experience was chronic insecurity. But where illegal immigrants and the recently arrived were disenfranchised, white working class voters and their culturally conservative fellow travellers were citizens. They seethed. “Left” governments who promised a Third Way—Clinton and Blair—failed the former, “Right” governments who did nothing to stem immigration and talked down Christian values failed the latter. The mix of class and race was suddenly salient again, posing a major challenge for a country with such a problematic race history as the United States. All forms of diversity were suddenly in the crosshairs.

Political entrepreneurs, Trump, Le Pen, Farage, Wilders, emerged to say: there is another way. They were quick to identify immigrants, religious minorities, refugees, foreign aid recipients and the liberal establishment as the problem. Their supporters know the liberal elite sees them as ignorant, backward, an embarrassment. But with the help of Trump they found their voice, which says: you can take control. You just have to take back power from the government and throw out the foreigners who have stolen your jobs or are doing them in China. It was a vast conspiracy, after all. You were right. The (white) social contract has been reneged on. And you were forced to be grateful for this, forced by the PC police to tolerate those who attack what you stand for and trash your most cherished values.

It isn’t Left vs. Right any longer... It is the out-of-touch liberal elite vs. the rest.

Trump’s election has changed all of this. It isn’t Left vs. Right any longer because a lot of that Left’s natural constituency has been lost (hopefully not permanently—a ray of hope—but what a missed opportunity a Sanders candidacy was). It is the out-of-touch liberal elite vs. the rest. And, guess what? The liberals are going to lose. Their signature ideology, free markets and human rights, will be among the first things to go. It appeals to too small a demographic. Why have people missed this? Because liberal elites talk to other liberal elites and political science often can’t see the wood for the trees.

Trump did everything possible to lose and he still won.

Can he fix any of this? Of course not. The seismic economic shifts are impossible to reverse without cutting off trade and growth, in which case greater fairness will come at the cost of huge economic contraction. Let us remember he’s promised tax cuts for the wealthy! What’s needed is a long-term plan of retraining, strategic investment in education and a great deal of research and development work for the new economy. All of which requires coordination, rather than endless bipartisan confrontation in both political and legal systems. It will need the very same experts, whose names are now so tarnished, to help formulate and implement the plan. These are big problems and will take a while to surface. What of the short term?

There are so many areas in which human rights will suffer, but let’s highlight three. Supreme Court appointments: one at least (with a Republican Senate likely to approve) will be enough to repeal Roe vs. Wade, and Trump might get three during his four years. Hang in there, Notorious RBG. Immigration: if the plan is really to deport millions of undocumented workers, then internment camps, dawn raids by thousands of armed government officials, deaths and killings in custody, border firefights and lacerating misery are almost inevitable. And foreign policy: Assad and Putin know that they can crush Aleppo with impunity because President Trump is only interested in something they also want, a massive air attack on ISIS. This isn’t even to start on Trump’s repudiation of generations of US foreign policy consensus on NATO, his tendency to make unilateral demands of other countries that he cannot possibly deliver on without negotiation and compromise, and his commitment to torture. Trump’s toxic attitudes will also surely affect the general climate for rights, for women, for the disabled, for minorities, in a deeply negative way by legitimating discrimination.

So, what is to be done? For human rights on the global scale, fight Trump and Trumpism. Fight fascism. Stop this ill-starred pursuit of failing global norms and institutions like the ICC, criminalizing the crime of aggression and a Convention on Crimes Against Humanity, and go where the struggle really is, on the ground, in national legislatures, in national courts, where there really is an “us” versus “them”. Embrace domestic, rather than international, politics. The struggle is now about democracy, democratic organization, reaching out, building coalitions of support that weaken the fascist base and getting into, in a serious way, class, race and identity. You fight fascism by rebuilding support for progressive democratic politics within national borders, not by building castles out of international normative air. It is now the national ballot box, more than international law, where the battle for human rights must be won.