The rule of law is the foundation for human rights, and a global index shows respect for this fundamental principle is declining worldwide—a persistent trend evident now too in established democracies. 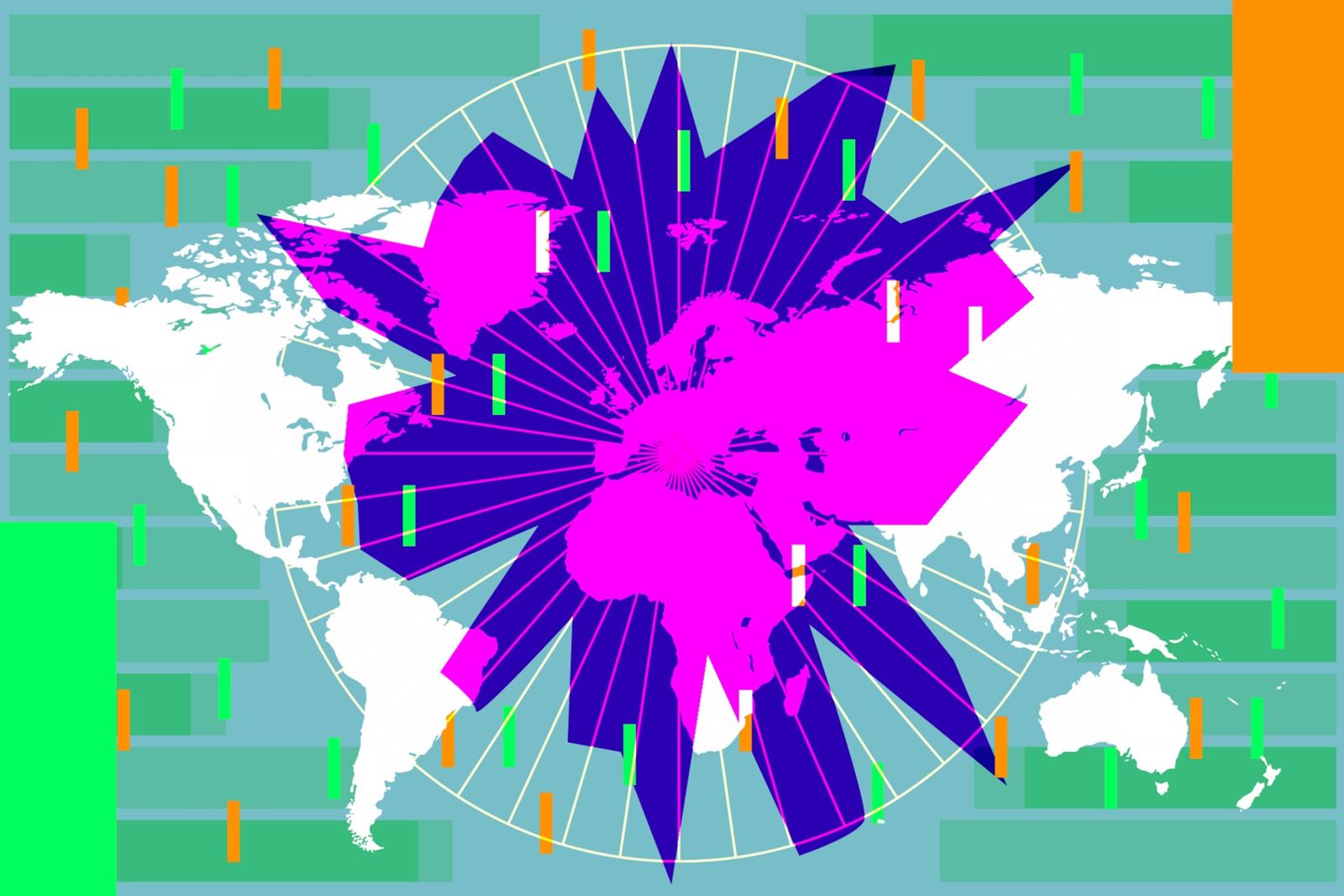 New data from the 2020 World Justice Project (WJP) Rule of Law Index show continued deterioration in the rule of law across the globe. This is not news to anyone reading contemporary headlines, but human rights advocates should be alarmed by three aspects of the trend—its breadth, its persistence, and the particular dimensions of the rule of law that are under most severe and sustained attack.

The WJP Rule of Law Index provides original, independent data on the rule of law. Now covering 128 countries and jurisdictions, the Index relies on more than 130,000 household surveys and 4,000 surveys of legal practitioners and experts to measure how the rule of law is experienced and perceived worldwide. The Index measures eight factors of the rule of law: Constraints on Government Powers, Absence of Corruption, Open Government, Fundamental Rights, Order and Security, Regulatory Enforcement, Civil Justice, and Criminal Justice. Each country receives an overall rule of law score and scores for each factor, as well as a ranking among the 128 countries globally and among other countries in their income group or region.

For the third year in a row, the WJP Rule of Law Index shows more countries with declining than improving respect for the rule of law. The declines were widespread and seen in all corners of the world. In every region, a majority of countries slipped backward or remained unchanged in their overall rule of law performance since the 2019 report. (Probe the data on WJP’s interactive data website here.)

The data show declining respect for the rule of law in many countries that have been models and advocates for rule of law norms.

Of particular concern, the data show declining respect for the rule of law in many countries that have been models and advocates for rule of law norms. Among countries in Europe and North America—traditional rule of law stalwarts—fully 13 of 24 countries saw a percentage decline in their Index score between 2019 and 2020, including small but meaningful declines in France, Hungary, Poland, Portugal, Romania, and the United Kingdom. The United States also dropped and for the first time fell out of the top 20 in the global rankings, replaced in that cohort by Spain. Globally, among countries with scores above the median, a significant majority saw declining respect for the rule of law. The rule of law crisis is widespread, and even countries with historically strong governance are under stress.

The persistence of the deterioration is another key finding of the 2020 WJP data. Anyone who works on rule of law issues knows that change generally comes slowly and that there are ups and downs along the way. In this light, it is remarkable not only that in each of the last three years we saw respect for the rule of law decline in a majority of countries, but that it is declining in a number of the same countries year after year. A majority of those with declining rule of law scores in 2020 also saw declines in 2019. The persistent negative trend is even more pronounced for the factor measuring Constraints on Government Powers. More than 70% of those countries and jurisdictions declining in this area in 2020 also did so in 2019. This is not the usual ebb and flow, but an era of continued erosion of the rule of law in a number of countries.

The global deterioration in the rule of law is not just widespread and persistent, it is also most evident in the factors that matter most for human rights protection. At a global level, countries experienced the biggest declines over the past year in the areas of Fundamental Rights (54 declined, 29 improved), Constraints on Government Powers (52 declined, 28 improved), and Absence of Corruption (51 declined, 26 improved). This is not a new pattern. WJP data shows the same three factors were the largest decliners over a five-year time horizon as well. Fundamental Rights showed the most backsliding with 66% of countries dropping in score since 2015. 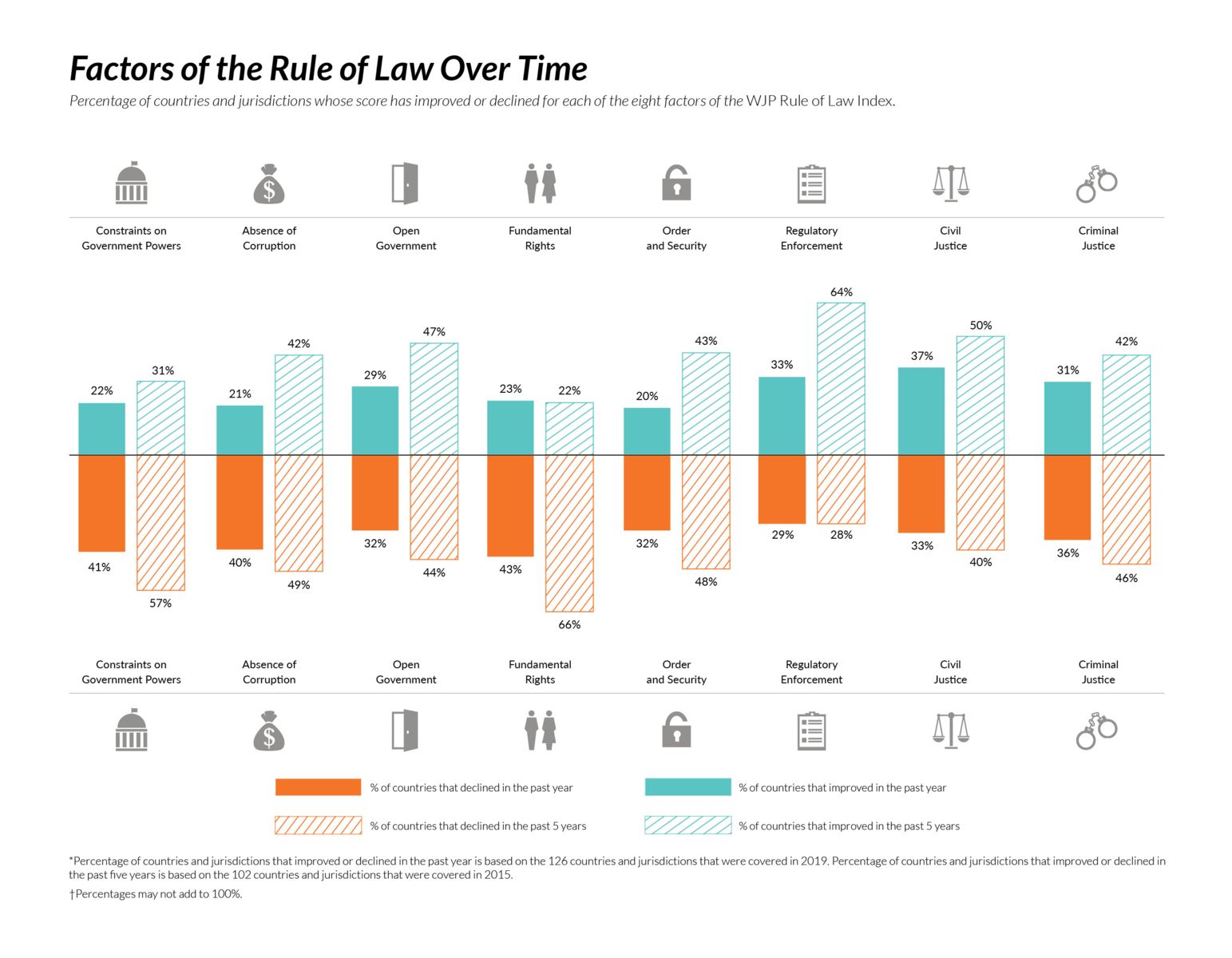 Together, these data highlight a growing concentration of power in government and cracks in the foundation the rule of law provides for human rights advocacy and protection, namely an independent and impartial judiciary, independent audit and ombudsperson agencies, unfettered civil society, and free and independent media. With these critical institutions, and the checks and balances they provide, under attack in established democracies as well as less free states, we can anticipate continued challenges for the embattled human rights movement.

Persistent as these trends seem to be, the data from at least some countries suggest this is not a sustainable path.

The good news is that persistent as these trends seem to be, the data from at least some countries suggest this is not a sustainable path. The countries that saw the biggest improvement in their WJP Rule of Law Index score this year were Ethiopia and Malaysia—two countries where citizens finally had enough of corrupt strongman rule, and new leaders have raised hopes for a future where the rule of law is assured. Over the past year, protests have erupted around the world, suggesting others may be reaching their limits as well.

When the rule of law pendulum swings back in such places, there will be much work to do to rebuild the institutional frameworks that undergird human rights and the rule of law. As the recent experience of Ethiopia and Malaysia underscore, such transition can be painstaking and politically fraught, and societies emerging from protracted periods of poor governance are rarely patient. In Ethiopia, the transition has brought political opening and legal reform but also rising ethnic tension and unrest. In Malaysia, democratization and the fight against corruption have recently stalled as political rivalries unseated the transition government.

The WJP Index data highlight a number of cases where hopeful political transitions a few years ago have given way to backsliding or stagnation in respect for the rule of law. A top priority for human rights advocates should be learning the lessons of past transitions. Accountability for past rights violations and support for a robust civil society and free media are key, but not enough. What are the constitutional frameworks and institutional models that work? What development and technical assistance is needed, and how should it be sequenced? What mix of economic and political support can help sustain a reform agenda? Grappling with these questions will be critical to seizing the opportunities presented by future rule of law transitions.

Alicia Evangelides is the Director of the World Justice Project's Rule of Law Index.

How can the human rights community respond to severe political polarization?