Although Indonesia has long been seen as a religiously moderate country, Sunni Muslim militants are attacking minority religious communities across the country. Indonesian law protects religious freedom, but mobs reign on the streets; the government does little to stop the violence.

Human rights and religion can be mutually supportive; that much is clear from the ongoing openGlobalRights debate. But for this to happen, religious leaders need to be tolerant of other interpretations of their own faith, as well as of faiths very different from their own.

Outsiders have long viewed Indonesia as a bulwark of moderate Islam. In November 2010, for example, US President Barack Obama visited Jakarta and mentioned “the spirit of religious tolerance that is enshrined in Indonesia’s constitution, and that remains one of this country’s defining and inspiring characteristics.”

This religious tolerance, however, is under acute threat. Sunni Muslim militants are seeking confrontation with Buddhist, Catholic and Shia Muslim communities. In many instances, moreover, the Indonesian government and Muslim mass organizations are not doing enough to help.

Last month, Indonesian police tightened security around Java’s Borobudur Buddhist temple complex in response to a threat by Islamist militants to destroy the UNESCO World Heritage site. The militants had circulated the threat online, calling for the “demolition” of Borobudur by “Islamic caliphate mujahidin.”

On this occasion, police took the threat seriously, knowing that religious intolerance and related violence has become rampant. On August 7, 2013 a bomb planted by unknown perpetrators exploded inside a Buddhist temple in downtown Jakarta during services, injuring three. That came just weeks after Indonesian Islamist militants vowed vengeance against Buddhists for attacks in Myanmar against Rohingya Muslims by members of the country’s Buddhist majority. A day later, unknown perpetrators tossed Molotov cocktails into the yard of a Catholic high school in Jakarta. The staff extinguished the flames by dousing them with water from the school's bathroom.

The minority Shia Muslim community on Madura Island wasn’t so lucky. Since August 2012, hundreds of men, women and children have sought refuge in a sports stadium after more than 1000 Sunni militants attacked their village. The attackers torched about 50 homes, killed one villager and seriously injured another. The local police stood by watching while the Shia survivors fled for their lives. 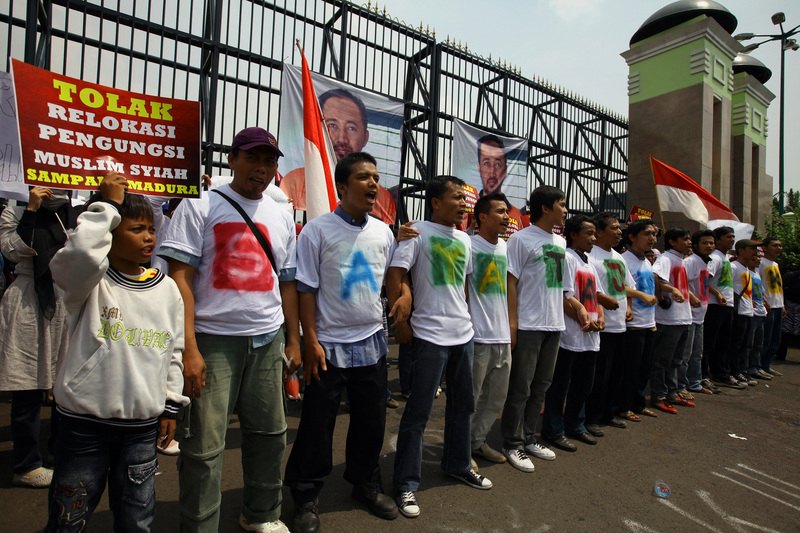 Indonesia Shiites in Jakarta protest against their forced relocation.

A year after that attack, on June 20, 2013, about 1000 Sunni militants besieged the stadium where the Shia villagers had been seeking refuge. Militants demanded that the Shia relocate to a town more than two hours away, and government officials actively helped the militants achieve this. A top local official dismissed criticism, saying: "I don't care [about] human rights as long I protect those who voted for me as their leader."

The ordeal of Madura Island’s Shia community is not unique. Across Indonesia, religious minorities, including several Christian groups, Shia, and the Ahmadiyah (who consider themselves Muslims but are viewed as heretics by some other Muslims), are targets of harassment, intimidation, threats and, increasingly, mob violence. Indonesia’s Setara Institute, which monitors religious freedom in Indonesia, documented 220 cases of violent attacks on religious minorities in 2013, up from 91 such cases in 2007.

Indonesia’s mainstream Muslim mass organizations, Nahdlatul Ulama (NU) and Muhammadiyah, have failed to adequately respond to these incidents. Neither organization has publicly opposed the 2005 fatwa by Indonesia’s semiofficial Ulama Council (Majelis Ulama Indonesia, or MUI), which ruled that the Ahmadiyah community deviated from Quranic teachings.

In January 2014, Dr. H. Marsudi, general-secretary of NU, soft-pedalled the danger of religious intolerance and related violence. He denied that such incidents were religion-related, and described them instead as the result of “other factors," such as romantic entanglements and automobile traffic.

The public is expressing long-repressed views. Among them, unfortunately, is a strong trend of intolerance towards religious minorities.

Ever since President Suharto was forced to step down in 1998 after more than three decades in power, the public is expressing long-repressed views. Among them, unfortunately, is a strong trend of intolerance towards religious minorities.

Groups such as the Islamic Defenders Front (locally called FPI) mobilize masses of "protesters" and swarm minority houses of worship. The leaders of such groups say they are defending the Muslim community against "infidels" and "blasphemers." They disrupt the religious observances of minority communities with loudspeakers, and by dumping animal carcasses and feces on doorsteps.

The Indonesian government cannot claim to be unaware of these incidents. For years, Indonesian human rights organizations, including the Jakarta-based Commission for Missing Persons and Victims of Violence (Kontras), have warned that religious intolerance is the second most common cause of human rights abuses in the country. The Jakarta-based Wahid Institute has also noted with alarm the rise of unchallenged “hate speech.”

Unfortunately, these warnings have failed to prompt decisive government action to protect minorities or to take legal measures against the perpetrators of harassment, intimidation and violence.

There are several reasons for the government’s inaction. Discrimination against religious minorities is deeply entrenched in the state bureaucracy. During the Suharto era, Indonesians were required to list their religion on their national identification cards, choosing from one of five recognized religions, a practice that discriminated against, and put in an untenable position, followers of hundreds of minority religions. Although the current Population Administration Law gives citizens the choice of whether or not to declare their religious faith on their ID cards, those who wish to declare a faith still must choose from a list of only six protected religions. Individuals who do not declare a religion risk being labeled “godless” by some Muslim clerics and officials and subject to possible blasphemy prosecution.

In 2012 alone, a self-declared atheist, a Shia cleric, and a spiritualist were jailed for blasphemy after listing Islam as their religion on their ID cards.

State institutions have also directly violated the rights and freedoms of minorities. The Ministry of Religious Affairs, the Coordinating Board for Monitoring Mystical Beliefs in Society under the Attorney General’s Office, and the Indonesian Ulama Council, have eroded religious freedom by issuing decrees and fatwas against members of religious minorities, and pressing for the prosecution of “blasphemers.”

The government response has been weak at best and complicit at worst. Officials and security forces frequently facilitate harassment of religious minorities, in some cases even blaming the victims for the attacks. Authorities have made blatantly discriminatory statements, refused to issue building permits for houses of worship, and pressured minority congregations to relocate.

Police often side with Islamist militants, ostensibly to avoid violence. In some cases, they even collude with the attackers for religious, economic, or political reasons. In other instances, they lack clear instructions from seniors or feel outnumbered by militants. In all cases though, poor police response reflects institutional failure to uphold the law.

Indonesian President Susilo Bambang Yudhoyono, who will step down in October 2014 after a decade in office, has been part of the problem. Despite the occasional lofty rhetoric on religious tolerance, he has failed to act decisively.

A key challenge for President-elect Joko Widodo is to take immediate steps to reverse the malignant effects of religious intolerance. He needs to make protection of the country’s religious minorities a priority, and ensure authorities implicated in such abuses are suitably punished.

Phelim Kine is a former Jakarta-based foreign correspondent and the deputy director of the Asia division at Human Rights Watch. Follow him on Twitter at @PhelimKine