Donald Trump’s win in the US and Narendra Modi’s in India two years ago are both about the majority claiming greater victimhood.

One of the first text messages I received, minutes after Donald Trump was elected America’s 45th president, was from my Indian friend Gulrez in Los Angeles. In May 2014, when the self-styled Hindu nationalist politician Narendra Modi was elected India’s prime minister, Gulrez lived a few blocks away from me in Juhapura, a Muslim ghetto in the state of Gujarat, India.

Trump’s win feels like 2014 all over again: another country I love and have family roots in has elected a candidate whose ascension to power was built, in part, on wishing that Muslims like Gulrez and I would no longer exist. 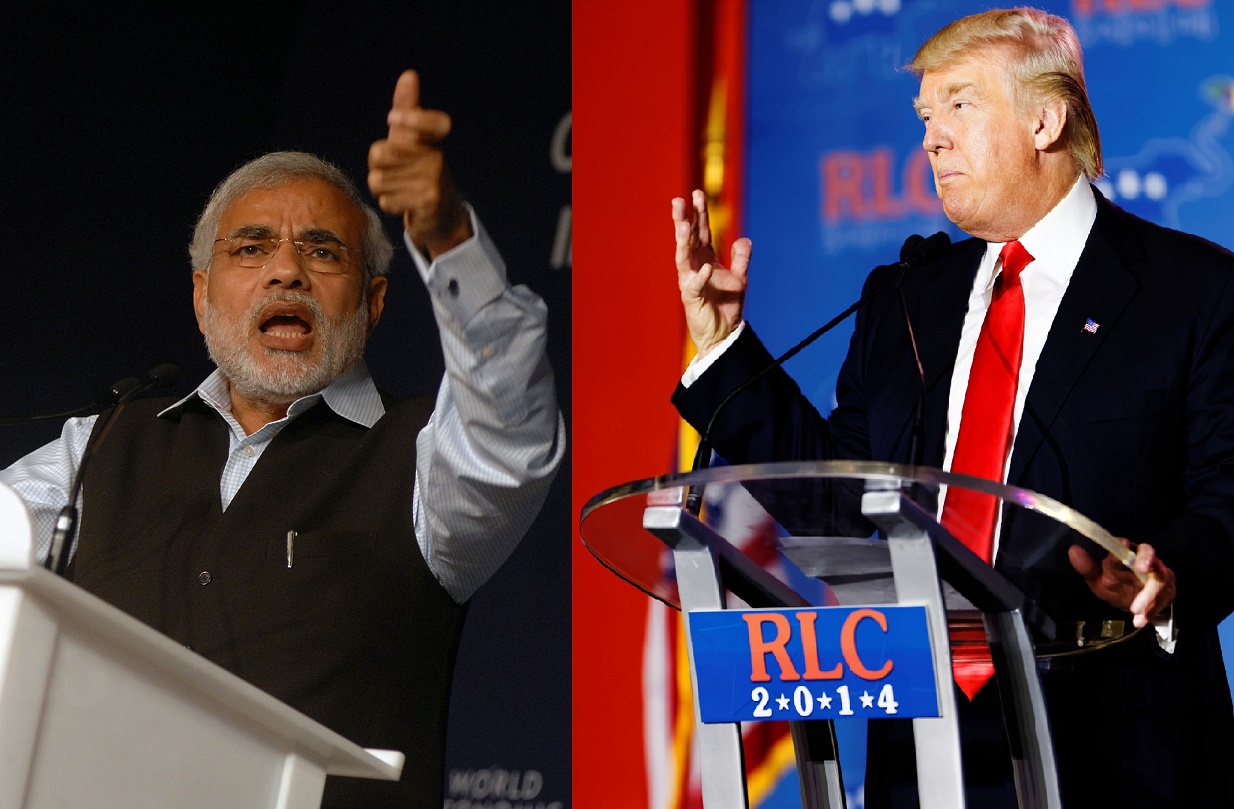 Donald Trump’s win in the US and Narendra Modi’s in India two years ago are both about the majority claiming greater victimhood.

I was shocked when Trump defeated Hillary Clinton, but not so in May 2014, when Modi won a landslide victory. As soon as it became apparent that Modi would win, a group of Hindu nationalists drove through the Muslim ghetto taunting us. “Kashmir is ours,” they shouted at us, as if Gujarati Muslims had anything to do with the conflict there. I could see the humiliation and the restraint in Muslims all around me.

I understood, quite clearly, what the Hindu nationalists meant: that Modi’s victory was not just about a change of power, but a message to Muslims to understand “your place” if you want to live in “our India.” Go to Pakistan or Bangladesh or Iran, they yelled at us, as if Muslims were Lego pieces that could easily be slotted into any country that has a Muslim majority.

Modi’s victory was not just about a change of power, but a message to Muslims to understand “your place”.

For many voters, Modi’s victory was supposed to be about economic reform, for an end to the dynastic politics of the corrupt Indian National Congress party that was in power for the previous 10 years. But for countless Hindu nationalists, it was also a chance to flex their muscles, to demonstrate to India’s minorities that the real aggrieved person in India is the upper caste Hindu.

I suppose I should not have been surprised. Those of us who witnessed the 2002 anti-Muslim pogrom in Gujarat know a different Modi. Back then, we in the NGO world spoke so little about Modi’s complicity because we never thought anyone would doubt us. In the summer of 2002, when Indian and international NGOs were urging him, as the head of the state government, to push for reconciliation between Hindus and Muslims, Modi instead called for state elections—even though tens of thousands of Muslims could not vote because they had been displaced and did not have proof of their new residence.

Living in Gujarat from 2011 to 2015, I grew accustomed to meeting Hindu nationalists who bragged about looting Muslim businesses, homes, and mosques. What I never got used to, however, was socializing with Hindu friends who would tell me—most often on nights when I took them out for Muslim style kabobs—“Yes, Modi is bad and yes 2002 was bad, but we need to move on and focus on the economy.” How dispensable, I thought, my life is to them as a Gujarati Muslim American?

I felt the same worthlessness as a person of color and as a Muslim American when I watched Trump deliver his acceptance speech. Trump’s very candidacy has been built on racial insults, and it is dizzying to think of all the people he offended during his campaign: Muslims, Mexicans, the differently-abled, women, US military veterans, African-Americans, and so many others. Hate crimes against Muslims in the US are higher today than they were even after 9/11 and shot up 67% last year. According to the Southern Poverty Legal Center, there have been more than 700 incidents of possible hate crimes—mostly against people of color—since Trump’s win on November 8.

Trump’s supporters, like Modi’s, will insist that their candidate has never explicitly called for violence. But Modi and Trump have often looked away when their supporters targeted minorities. At his rallies, Trump often egged his supporters on, urging them to take matters in their own hands, which they so often did, at the expense of black and brown people. Trump never punished or reprimanded them. In fact, he offered to pay the legal fees for his rowdy supporters. Modi, likewise, promoted Gujarat officials who led Hindu mobs against Muslims. Both are too smart to be violent themselves, but they will gladly ignore violence when if it will energize their voter base.

There are, of course, major differences between the leaders but the similarities are worth noting. For one, their victories have quenched a thirst in the US and in India for leaders who are strongmen. Consider the bizarre reality we now live in: Modi, leader of the world’s largest democracy, boasted in public about his 56 inch chest size; Trump, the president-elect of the world’s oldest democracy, boasted about his penis size.

Like many in the US, especially children of immigrants, I too have considered leaving America, of maybe returning to India, but there too, conditions aren’t great, especially for minorities. Since Modi has been prime minister, there has been a sharp rise in communal incidents. Today, a Muslim can be killed for eating the type of meat that is deemed wrong by a Hindu. Bollywood producer Karan Johar even had to release videos promising that he will no longer hire Pakistani actors.

The frustrating thing is that although the need is greater than ever, many still shy away from discussing privilege—be it is racial, caste, or gender. One of the criticisms I often heard from my Hindu friends in Gujarat is that as a Muslim, I talk too much about my identity. Interestingly enough, I was told something similar when I worked in the United States Congress.

In 2009, I watched a group of Republican members of Congress accuse Muslim American interns within the US government of being spies for groups like Egypt’s Muslim Brotherhood. At the time, I was working for a Democratic Congressman and I raised the issue with senior Democratic leadership that there was an ascendant group of Republicans who base their appeal on bigotry, homophobia, and sexism. My concerns were ignored—even laughed at by senior Democrats—and I was told I needed to be “positive” and to put aside “my identity politics.” Stop speaking about being Muslim American, they told me. Just be American.

But we who are on the margins, we who are at the bottom—we have to be named and we have to name others. I sometimes wonder what would happen if more voices were allowed to speak, if the upper caste Hindu kept quiet and instead made more space for the Dalit to speak; if white people in American recognized that the US will be only able to see itself fully if people of color are heard. Would we still have a Trump or a Modi if we had listened all along?

I do not know but this much is certain, at least to me: watching the elections results in 2014 and in 2016 have made obvious an ugly truth of our times that a large segment of the population will forgive the sins of a politician so long as the right group is being targeted.

Zahir Janmohamed is a journalist based in Portland, Oregon and Ahmedabad, India. He has previously worked as Advocacy Director in Amnesty International, for the Middle East and North Africa, and served as a senior foreign policy aide to Congressman Keith Ellison (D-MN).