As attacks on environmental rights defenders escalate, the stakes are high for the upcoming climate change talks in Germany.

At a time when people across the Caribbean, the United States, and South Asia are still suffering from the devastating impacts of floods and hurricanes, the stakes are high for the  talks on climate change planned for early November. Delegates from around the world will gather in Bonn, Germany, to continue their discussions on how the Paris Agreement—the landmark climate change pact adopted in Paris in 2015—should be carried out in both international and domestic policy.

This year, human rights advocates, indigenous peoples, environmental groups, and women’s rights advocates are asking their governments to take leadership on an issue that has often been neglected at previous talks: incorporating human rights in climate action. In a true watershed moment, the Paris Agreement was the first multilateral environmental agreement to explicitly call on governments to respect and promote human rights, gender equality, and the rights of indigenous peoples. 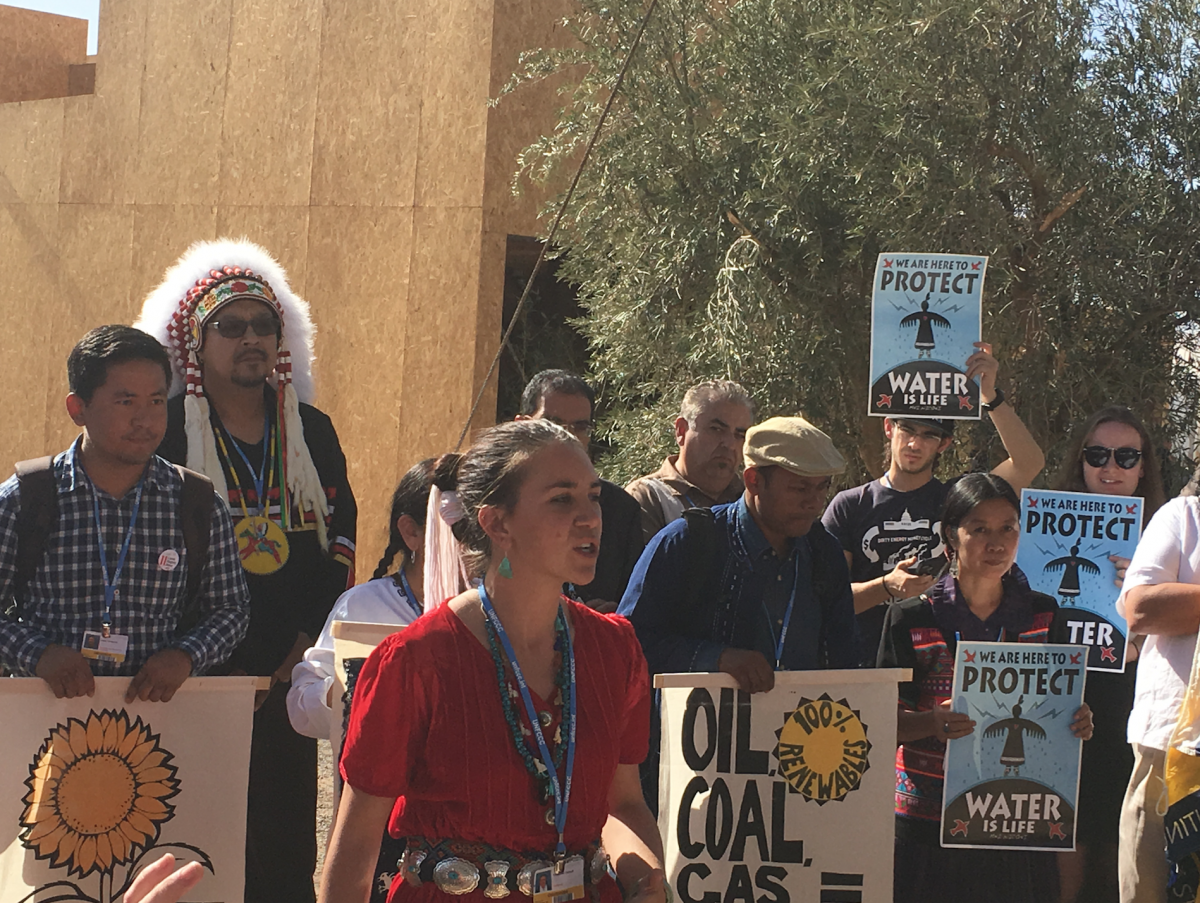 Indigenous peoples demand their rights at COP22 in Marrakesh, Morocco.

The frequent attacks and threats against environmental rights defenders throughout the world are an example of why governments need to include protecting rights in their climate policies. According to reports released by Global Witness and Front Line Defenders, the number of people killed each year for their environmental activism is on the rise. Harassment, threats, and killings are used to silence the voices of environmental activists around the world.

In addition to ignoring direct attacks on people who defend the environment, some governments use laws to criminalize the actions of environmental defenders or limit the space for activism. For example, Human Rights Watch research in Russia documented how groups that accept foreign funding and conduct “political activity” are vilified by the government as “foreign agents”—the authorities have defined “political activities” very broadly to include just about any kind of advocacy or outreach work.

Indeed, since the introduction of this law in 2012, the Russian government has imposed this label more than 20 environmental groups. In two cases “political activities” included public advocacy such as expressing support for Evgeni Vitishko, an activist who was jailed for allegedly damaging a fence that was concealing illegal construction in a protected forested area.

Unless governments stop the criminalization of defenders, protect those who defend the environment, and respect due process show a larger commitment to human rights, any efforts to protect the climate will easily be blocked.

But so far, governments have been reluctant to integrate rights protections in key sections of the “Paris Rulebook”,  the technical document governing implementation of the Paris Agreement. Including human rights considerations in reporting guidelines for “Nationally Determined Contributions” (i.e. national climate change action plans) could help ensure that government actions on climate change respect, protect and fulfill human rights. And as funds are distributed to help countries adapt to climate change and put mitigation measures in place, governments need to ensure that affected populations can participate in planning, that their rights are respected, and that there is transparency and accountability in how funding is used.

"Governments have been reluctant to talk about human rights in the Paris Rulebook negotiations."

It will also be harder to address human rights issues later on than if they take these obligations into consideration as they develop the rules. Including rights in the development of the so-called “Paris Rulebook” would make their policies more coherent and effective. And ultimately, emphasizing rights protections in climate policies will help protect the lives and health of those working to protect the climate.

The United Nations human rights expert Michel Forst last year called on governments to “listen to those who raise the alarm against environmental disasters, climate change and irresponsible resource exploitation, not repress them.” The governments who meet in Bonn should heed his words.

Katharina Rall is an environment researcher at Human Rights Watch.

Digging deeper: the impact of coal on human rights