In Indonesia, religious intolerance on the part of some Sunni Muslims is on the rise. The country’s population of 250 million people is approximately 87% Muslim, with Sunni Muslims making up about 99% of that population. Shia Muslims make up roughly 0.5% of all Indonesian Muslims, with Ahmadiyah at about 0.2%. Until a decade ago, there was very little religious tension between these groups, but today, elements within the Sunni majority are becoming increasingly antithetical to religious minorities.

Indonesia’s religion problem is part of a broader regional trend. In nearby Brunei, the government has banned at least eight “deviant” religions and fines schools for teaching any non-Islamic religious subjects. Similarly, Malaysia has banned 56 “deviant” interpretations of Islam, including Ahmadiyah, Islamailiah, Shi'a, and Bahai. In Myanmar, the government has dealt harshly with Rohingya Muslims and Buddhist religious leaders.

According to American academic Jeremy Menchik, Indonesia’s religious intolerance over the last decade stems from the rise of a “godly nationalism” focused on “an imagined community bound by a common, orthodox theism and mobilized through the state.” This may be true, but godly nationalism does not automatically lead to violence. In Malaysia, for example, state-level Sharia courts can order individuals who wish to convert from Islam, or those subscribing to a banned sect, to attend religious rehabilitation centres. However, the government also prohibits the use of violence against members of these faiths, and severely punishes offenders.

Why, then, are religious intolerance and violent vigilantism on the rise in Indonesia?

First, the rising violence can be strongly linked to the actions of former Indonesian president, Bambang Yudhoyono, the retired general who ruled the country from 2004 until October 20, 2014.

In 2005, Yudhoyono initiated the country’s religious problems by declaring that the Indonesian Muslim Council (MUI), a conservative Sunni religious group, was the only authorized interpreter of Islam, and pledging his government’s openness to their fatwas.

Intolerance is being institutionalized at an alarming rate, human rights of religious minorities are under threat, and human rights organizations struggle to do their work with no way of enforcing protection.

MUI wasted no time. They quickly declared Ahmadiyah a “misguided sect”, and ruled against “pluralism, liberalism, and secularism”. Ahmadi Muslims subscribe to the same six articles of faith as Sunni Muslims, with the primary difference being that Ahmadis believe that monotheistic prophethood is ongoing (Sunnis believe that Muhammed was the last prophet sent by God). With Ahmadis declared officially deviant, instances of hate speech and violence against Ahmadi Muslims rose quickly. Intolerance is being institutionalized at an alarming rate, human rights of religious minorities are under threat, and human rights organizations struggle to do their work with no way of enforcing protection.

Then, in 2008, the situation worsened when three ministers—Religious Affairs Minister Maftuh Basyuni, Home Minister Mardiyanto, and Attorney General Hendarman Supanji—issued a decree permitting criminal prosecution of Ahmadi Muslims for their beliefs and practices. In 2011 the governments of both East and West Java (the latter being Indonesia’s most populous province) used this decree to outright ban any Ahmadiyah activities. Today, 25 of the country’s regional authorities restrict religious sects, and most of those restrictions are aimed at Ahmadiyah, based on the decree.

For the first time in Indonesia’s history, moreover, Sunni militants are using violence against Shia Muslims in Sampang Madura, based partly on a 2012 decree issued by the Ulama Council in East Java that declares Shi’ism “blasphemous”. The government has done nothing to stop these acts.

Former president Yudhoyono’s alliance with the MUI stems from internal political calculations. His presidential bid had been rejected by pro-democratic activists and tolerant Muslim groups, many of whom said that his military background and lack of a democratic track record made him unfit for the job. Yudhoyono and his political allies then approached conservative religious groups, including the MUI, and asked for their political support. In return, Yudhoyono promised to treat MUI’s doctrines as policy. 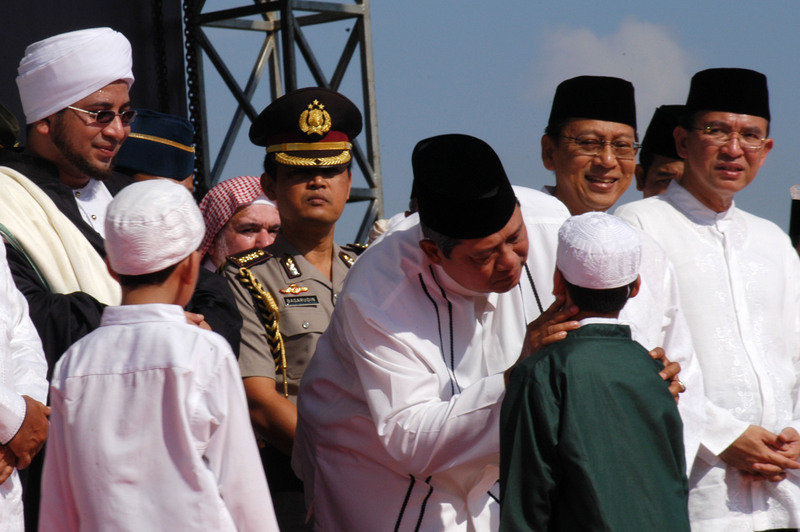 Some of the former president’s most trusted advisors were conservative Sunni Muslims, including Sudi Silalahi, appointed as cabinet and later state secretary. Silalahi was reportedly one of the generals backing jihadi militants who went into Ambon in 1999 to attack thousands of Indonesian Christians. To say that his human rights record was poor would be a vast understatement.

Yudhoyono’s crackdown on Ahmadiyah was driven by Ma’ruf Amin, chairman of the MUI, and chief presidential advisor on inter-faith relations. Amin’s power grew rapidly during Yudhoyono’s tenure, and he was able to transform his intolerant ideas into state policy.

Finally, the former president repeatedly appointed personal friends and conservative Muslims to run the ministry of religious affairs, transforming that once tolerant department into one suspicious of non-Sunni religious minorities.

Today, many hope that Indonesia’s new president, Joko “Jokowi” Widodo, will take the government in a different direction. Widodo, who many voters view as a “clean” politician, ran on a campaign promising a “mind-set” revolution with a decisive break from the country’s authoritarian and intolerant past.

To ensure that this happens, Widodo must first decree that no single person, movement or organization can be the sole authority for religious interpretation, including the MUI. Next, he must guarantee that religious doctrine is no longer used as justification for government policies and legislation. This guarantee needs to include a revision of Law No. 1/PNS/1965, which explicitly prohibits “deviant interpretation” of religious teachings and mandates the dissolution of organizations practicing deviant teachings. Finally, Widodo must express his government’s clear commitment to providing equal services, and guarantees of religious freedom, to all Indonesians. All of his ministers and senior advisors should be vetted for their religious views and track records, to weed out those with a record of intolerance.

Finally, Widodo must reinforce the rule of law, and punish anyone who uses violence and vigilantism for any reason, including religious reasons.

If Widodo does not do these things immediately, Indonesia risks going down a much more frightening and dangerous road.

Ahmad Sueady is the Director of the Institute of the Southeast Asian Islam at the State Islam University (UIN), Sunan Kalijaga, Yogyakarta, Indonesia.