In India, Hindu religious leaders are reluctant to campaign loudly against the collection of raw sewage by oppressed communities, and this is slowing progress in abolishing the practice.

Sixty-nine years after independence, a recent Human Rights Watch report on “manual scavenging” in India has highlighted an abhorrent practice still prevalent throughout much of the country.

The 96-page report notes that despite state and federal legislation, local authorities still often force Dalits, or “untouchables”, to clean the human excreta of upper castes with primitive tools, often exposing their hands and feet to raw waste. Most cleaners of these “dry toilets” are women, since Dalit men tend to deal with septic tanks and fields used for open defecation. In addition to their terrible working conditions, these lower-caste cleaners often face violence, harassment and withholding of wages.

The latest law making scavenging a crime was passed by India’s Parliament in 2013, with the support of all political parties. And yet, scavenging persists. Successive governments have failed to implement earlier laws, and have not made installation of running water toilets in homes, businesses and institutions a top priority. 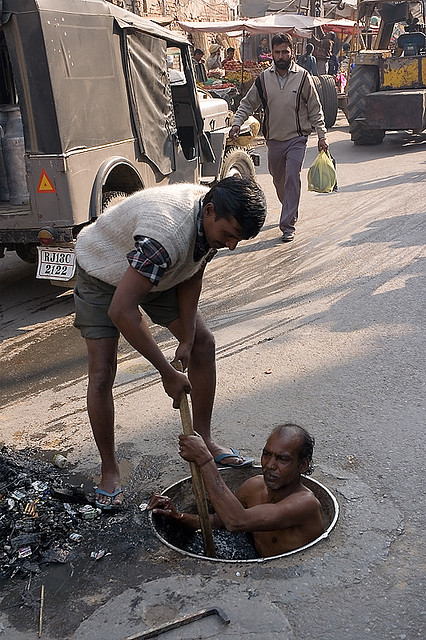 A Dalit man cleans a sewer in Amritsar, India.

Government administrators alone, however, cannot prevent a practice based on deeply rooted cultural and religious traditions. Hindu beliefs, as popularly understood by millions of Indians, endorse the notion that certain groups were destined at birth to clean the waste of those born into socially higher castes.

And what is most problematic is that few of the thousands of contemporary Hindu religious leaders have taken the issue up in a serious, sustained way.

Previously on openGlobalRights, religious expert Arvind Sharma argued that Hindu beliefs can, and often are, compatatible with human rights. If one ancient text promotes strict ideas about caste, others interpret it in far less rigid ways.

Why are so few Hindu religious leaders campaigning loudly against this demeaning and unhealthy job assigned to the lowest castes?

True enough. Still, the real question is this: why are so few Hindu religious leaders campaigning loudly against this demeaning and unhealthy job? Why is manual scavenging still assigned to the lowest castes? This lack of religious-based protest is something that defenders of the Hindu faith cannot easily explain.

Chandra Bhan Prasad, a leading Dalit intellectual, says Hindu spiritual leaders do not speak out against caste because it is the foundation of their religion. “If you abandon [the] caste system,” he explained, “Hinduism will weaken, because the religion is built on it.”

Bharati Chaturvedi of Chintan, an evironmental NGO based in New Delhi, concurred. Hindu “religious leaders, she says, “derive their sanctity from the caste system,” and any far-ranging critique of caste “would be going against the grain.”

Unlike India’s Hindu religious leaders, the newly elected Indian prime minister, Narendra Modi, has decided to address sanitation in a big way. On the birthday of Mahatma Gandhi, Modi launched a “my clean India” campaign, promising to ensure installation of running water toilets in every Indian home by October 2019. He has kept caste and manual scavenging out of this narrative, however, realising that many of his party’s political supporters are members of the Hindu upper castes, and might not take kindly to caste-based criticism. Instead, the prime minister’s message is all about building a clean India, something which everyone can get behind.

Modi’s party, the Bharatiya Janata Party (BJP), consciously courts Hindu voters, but its emphasis is on all-Hindu unity. As a result, the party has been working with Dalits, the lowest caste, to mobilize electoral support. In the past, many Dalits voted for Congress, but over the years, some have switched allegiance to the Dalit Bahujan Samaj Party, in Uttar Pradesh. In the 2014 national elections, however, Dalits in other states often voted for the BJP.

Sri Yogi Adityanath, a fiery BJP leader from Gorakhpur, denies that Hindusism regards lower castes as outside the fold. “All are Hindus,” he told, me, regardless of “whether they are cleaning toilets or excreta. Lower caste or upper caste does not matter—they are all part of our religion.” This is the official party line, an attempt not to divide the Hindu vote bank. Adityanath says Hindu religious leaders had always worked for the betterment of Dalits and other lower castes, but that journalists rarely report on these efforts. “You people don’t want to acknowledge all this,” he told me, but the BJP “has schools for Dalits… [we] help families when they want to get their children married…. All are Hindus. You people are biased.”

And yet, the bitter truth is that many of the ills plaguing Indian society flow from the caste system. It ranks people at birth, and regards those outside or at the lower end of the caste hierarchy as born into the most rigorous, menial and demeaning of jobs.

Manual scavenging is still prevalent even in states like Maharasthra, where the government claims it rarely takes place. Laws do little to change the mindset of people brought up for centuries in the belief that some are entitled at birth, while others are not.

Swami Avdheshanada Giri, head of Juna Akhada, a religious sect in the northern Indian holy city of Haridwar, told me that change is slow but sure, and that “all Hindu spiritual leaders now preach against untouchability.” And yet, I rarely read media reports citing Hindu leaders protesting manual scavenging. If religious figures are really protesting, they are not doing so loudly enough for many believers to take notice, especially in India’s vast countryside. As recently as September 2014, for example, temple staff “cleansed” and “purified” a Hindu shrine in the eastern state of Bihar after Jeetan Ram Manjhi, a lower-caste politician and chief minister of state, visited the location.

Govind Archarya, former BJP general secretary, says Hindu religious leaders of the Vishwa Hindu Parishad, an affiliate of the larger BJP family, have long worked againt untouchability, regarding it the “worst sin that can be committed on earth.” And yet, few VHP leaders ever appear to speak out publicly and forcefully against manual scavenging.

Untouchability, manual scavenging and dry latrines may well be on their way out. Perhaps prime minister Modi’s “clean India” campaign will help. Change for India’s manual scavengers is painfully slow, however, and many Dalits are still forced to clean the waste of their upper-caste “betters” with few tools, compensation or protection.

Change would go much faster if prominent Hindu religious leaders were willing to play a louder, and more active, role.

Seema Guha is a New Delhi-based freelance journalist writing on Indian foreign policy.  She also works as a commissioning editor for openGlobalRights.