To insist on the Rohingya status as a victimized religious minority while ignoring other factors cements their position as outsiders, fueling exclusionary forms of both politics and religion.

International human rights advocates who want to help the Rohingya and other persecuted groups are not furthering their causes by seeing religious violence behind every corner. In the case of the Rohingya, advocates should stop fostering the narrative of religious intolerance and instead insist that the Burmese government treat the Rohingya as human beings, and as legitimate citizens of Myanmar, worthy of dignity and respect.

For decades, the Rohingya have been denied citizenship by the Burmese state, which falsely classifies them as Bengali immigrants and subjects them to discrimination and scorn. Now the military is undertaking what UN high commissioner for human rights Zeid Ra’ad Al Hussein calls “a textbook example of ethnic cleansing.” The United Nations has described the situation as catastrophic. 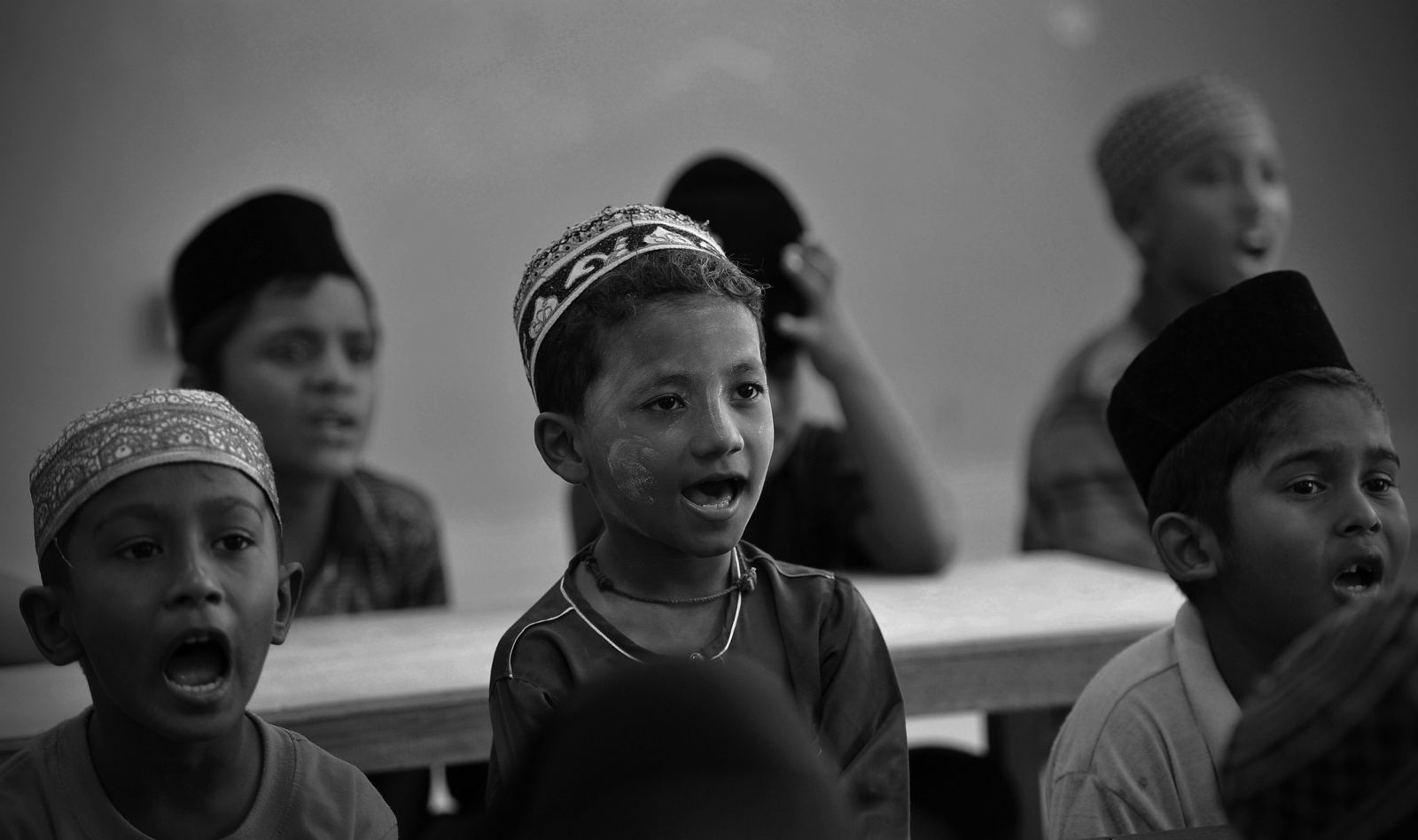 Rohingya orphans learning in a classroom in Malaysia.  For many Rohingya, relocating is the only way they can carry out their lives.

Many cite religious intolerance as the source of this violence, and perhaps the notion of an engrained Buddhist-Muslim axis of religious violence is compelling—but it is wrong. This explanation taps into a longstanding habit of portraying non-white peoples as prone to religious violence and has become popular with much of the media and human rights community. They repeat the narrative of the Rohingya as a Muslim minority persecuted by the Buddhist majority.

Yet this is a misleading representation of the violence, and insisting on the Rohingya’s status as a victimized religious minority while ignoring other factors cements their position as outsiders, fueling exclusionary forms of both politics and religion. The Rohingya are not only persecuted because they are Muslim, but because they are seen as immigrants, threatening to the former junta, and a hindrance to powerful business interests.

Emphasizing the religious element, however, masks the economic and political interests that are profiting from the subordination and repression of this group. It deflects attention away from state-sponsored violence, the land and power-grabbing ambitions of the governing elite, the xenophobic foundations of the discrimination, and the environmental, social and economic costs of Burma’s opening to trade and foreign investment.

This deflection is evident in the way the Rohingya are depicted by the government and others as non-Burmese and even as sub-human. While some saw a glimmer of hope in the rise to power of Aung San Suu Kyi’s National League for Democracy in late 2015, when asked about the plight of the Rohingya shortly after the election, senior party leader U Win Htein told the New York Times that the government has “other priorities.” The officially used language to refer to the Rohingya was similar to that of the military-backed government, referring to them as illegal immigrants who must be “returned” to Bangladesh. As Elliott Prasse-Freeman wrote, “those who are killed are arguably not even killed as an identity group, but rather as so much detritus falling outside of a group, and hence outside of the political community entirely.”

This is not a conflict between Muslims and Buddhists over religion or ways of life; economic and state interests are benefitting richly from the Rohingya’s expulsion. As I argue in my book, Beyond Religious Freedom, this crisis emerges out of the legacy of Burma’s “divide and rule” colonial history, the social perils of rapid economic liberalization, including the rise of a rapacious business elite, and the cultivation of an exclusionary Burmese nationalism that posits the Rohingya as scapegoats.

This is not a conflict between Muslims and Buddhists over religion or ways of life; economic and state interests are benefitting richly from the Rohingya’s expulsion

Characterizing the violence against the Rohingya as fundamentally religious absolves the governing elite from their complicity, and at the same time it amplifies the misguided notion that what really matters in this conflict is Buddhist-Muslim difference. Rather than defanging extremists, it reinforces religious divides while deflecting attention away from educational and advocacy efforts by international and regional organizations who are attempting to support the Rohingya and challenge extremists in and beyond the Burmese state. It also makes life difficult for dissenters inside Myanmar who reject the narrative of entrenched religious hatreds as grounds for nationalist exclusion. An example is the punk rock band Rebel Riot, from Yangon, whose lead singer Kyaw Kyaw has spoken out against Buddhist monks and others instigating violence against the Rohingya. “If they were real monks,” Kyaw Kyaw said, “I’d be quiet, but they aren’t, they are nationalists, fascists. No one wants to hear it, but it’s true.”

In Myanmar and beyond, reducing violence to a problem of religious intolerance obscures the complex tapestry of human sociality, rendering the problems faced by vulnerable groups more intractable. Refracting conflict through the prism of religious difference exacerbates social tensions, and governing through religious rights marks religious difference as an especially threatening form of social difference.

In Bosnia, for example, the nationalization of “Muslim” as a salient public identity was not complete until the 1974 constitution. Historians of that region have traced a distinctive genealogy of the category Muslim, showing its incremental attachment to the idea of ethnicity and its intensifying significance as an alleged indicator of political allegiances up to and during the war of the 1990s. David Campbell has shown that many Bosnians who described themselves as atheists before that war woke up to find themselves identified—and politically and publically divided—by a newly salient religious identity.

These identities may appeal to powerbrokers like Modi, Netanyahu, or Trump, who gleefully label the violence undertaken by the Rohingya and other groups to defend themselves as “Islamist terrorism,” and depoliticize and demonize it. But the politicization of religion never serves the interests of those forced to live under those designations. Recourse to religious violence as an explanation and calls for religious rights and freedoms as solution obscures the complex causes of social discord and diminishes the potential for alternative forms of solidarity. It leaves voiceless those who would speak in a different register.

In November, Myanmar signed a pact with Bangladesh to repatriate some of the at least 620,000 Rohingya who have sought refuge in Bangladesh since August. This should leave us skeptical. Myanmar’s ministry of labor, immigration and population said the country would accept only those with government-issued identity documents and, according to an Amnesty International report released this week, the government has engaged for decades “in an active policy of depriving Rohingya of vital identity and residency documentation.” International refugee law, indeed international law at all, is unlikely to save them in the face of active state-sponsored dispossession.

If human rights advocates want to save the Rohingya, they need to target the interests that underpin the violence. The complex dimensions of the crisis, and in particular the state’s role in abetting the violence, demand the international community’s attention. As the Rohingya lose their homes and face statelessness at best or annihilation at worst, it is imperative that rights advocates cultivate multiple modes of solidarity with them, not as Muslims but as fellow human beings.

Islamic ideals of peace and justice: are we overlooking something?