Have feminists made traction in campaigning that “women’s rights are human rights?" We interviewed thousands of people to find out.

Over time, they hoped, ordinary people would come to view gender equality, protection from domestic violence, and other critical issues facing women as no less important than the rights of male political activists seeking protection from torture and imprisonment.

Thirty years later, who supports this claim? What traction does the “women’s rights are human rights” slogan have worldwide? Who are its strongest adherents?

What traction does the “women’s rights are human rights” slogan have worldwide? Who are its strongest adherents?

To answer these questions, we interviewed 4,740 respondents from five major cities across multiple regions in the global South: Asia (1680 persons in Mumbai and its rural hinterland, in 2012), Latin America (Mexico City, 960 persons, 2016), North Africa (Rabat and Casablanca and rural hinterlands, 1100 persons, 2012), and Sub-Saharan Africa (Lagos and rural areas, 1,000 persons, 2014). Our sampling was statistically representative of these geographical areas.

In the thousands of face-to-face interviews we conducted in alleys, central thoroughfares, doorways, and side streets, we asked men and women: “To what extent do you associate the term, ‘human rights,’ with the phrase, ‘protecting women’s rights’?” We offered respondents a response scale of 1, or “I do not associate the two phrases at all,” to 7, or “I associate the two phrases very much,” and urged them to consider using the intervening numbers to nuance their answer.

In all four cities, respondents were more likely than not to associate “human rights” with “protecting women’s rights”. This is illustrated in the graph above in the fact that all four bars are above the midpoint of 4. Residents of Mexico City are most likely to associate the two (6.3 on the 1-7 scale), followed by those living in Rabat and Casablanca (5.9), Lagos (5.2) and Mumbai (5.0).

This remarkable finding suggests that 22 years after the Beijing world conference on women, the “women’s rights are human rights” slogan is known and accepted by many people in the global South. For evaluation geeks, this is an impressive outcome worth reflecting on and celebrating.

Who are the constituents?

To learn more, we dug deeper with statistical regressions, a procedure that helps us estimate the unique impact of specific causal variables—such as respondent’s gender, income, urban/rural residency, or religiosity—on a given outcome of interest, controlling for other explanatory factors. In this case, the outcome we sought to explain was the strength of respondents’ association of “human rights” with “protecting women rights”, measured on the 1-7 scale. 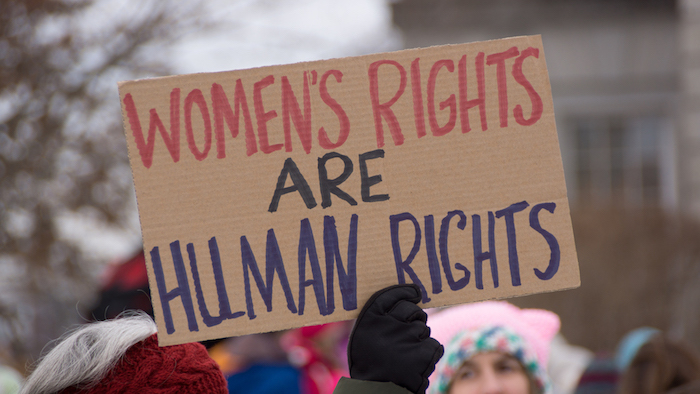 What are the implications of associating human rights with women’s rights?

Interestingly, regression analysis of the pooled model for all the surveys, taken together, showed that women were no more likely than men to associate human rights with women’s rights. People who reported being better off financially, however, were more likely to make that association, as were people who lived in cities, as opposed to those living in the countryside.

The role of religion

We were particularly interested in the association with religiosity, given the intense debate over the link between faith and human rights. Some argue that religion and rights are enemies, others that they are friends, and still others aren’t sure. Regardless, most observers have strong feelings about the faith-rights connection.

Religion did in fact matter in our analyses. In all four cities, people who scored higher on our personal religiosity index were more likely to associate human rights with women’s rights. This surprised us.

We had created the personal religiosity index by combining respondent answers to two questions: 1) How important is religion in your life, and 2) How often do you pray? These questions got at something different than what we called our “social religiosity index”, which we had created by combining responses to, 1) How often do you attend a place of worship, and 2) Have you participated in the activities of a religious organization, other than a place of worship?

The link between greater personal religiosity and greater willingness to identify women’s rights and human rights is a puzzle, but a pleasant one, suggesting that religion, rights and gender may not be as toxic a brew as some fear.

What are the implications of associating human rights with women’s rights? To learn more, we asked whether the association increases, or decreases, public support for the organized human rights community.

To do this, we ran another series of statistical regressions in which associating human rights with protecting women’s rights was the explanatory variable of interest, while trust in local rights organizations—expressed on a scale from 0, or no trust at all, to 1, or total trust—was the outcome we sought to explain.

In two of the country models (India and Morocco) and in the pooled model, associating human rights with women’s rights was associated with more trust in local rights groups. In one (Mexico City) it was associated with less trust, and in Nigeria, it had no statistically significant association at all.

These findings offer some qualified support for the notion that when publics believe that human rights and women’s rights are one and the same, this can be a good thing for the local rights community.

With the help of surveys, local activists can begin to unpack the sources of support and opposition within their own communities. This greater knowledge, in turn, can help activists generate smarter, evidence-based practices of research and advocacy.