Prioritizing the launch of Indonesia’s pre-employment card compromises the distribution of existing social assistance programs that could directly help those in immediate need. 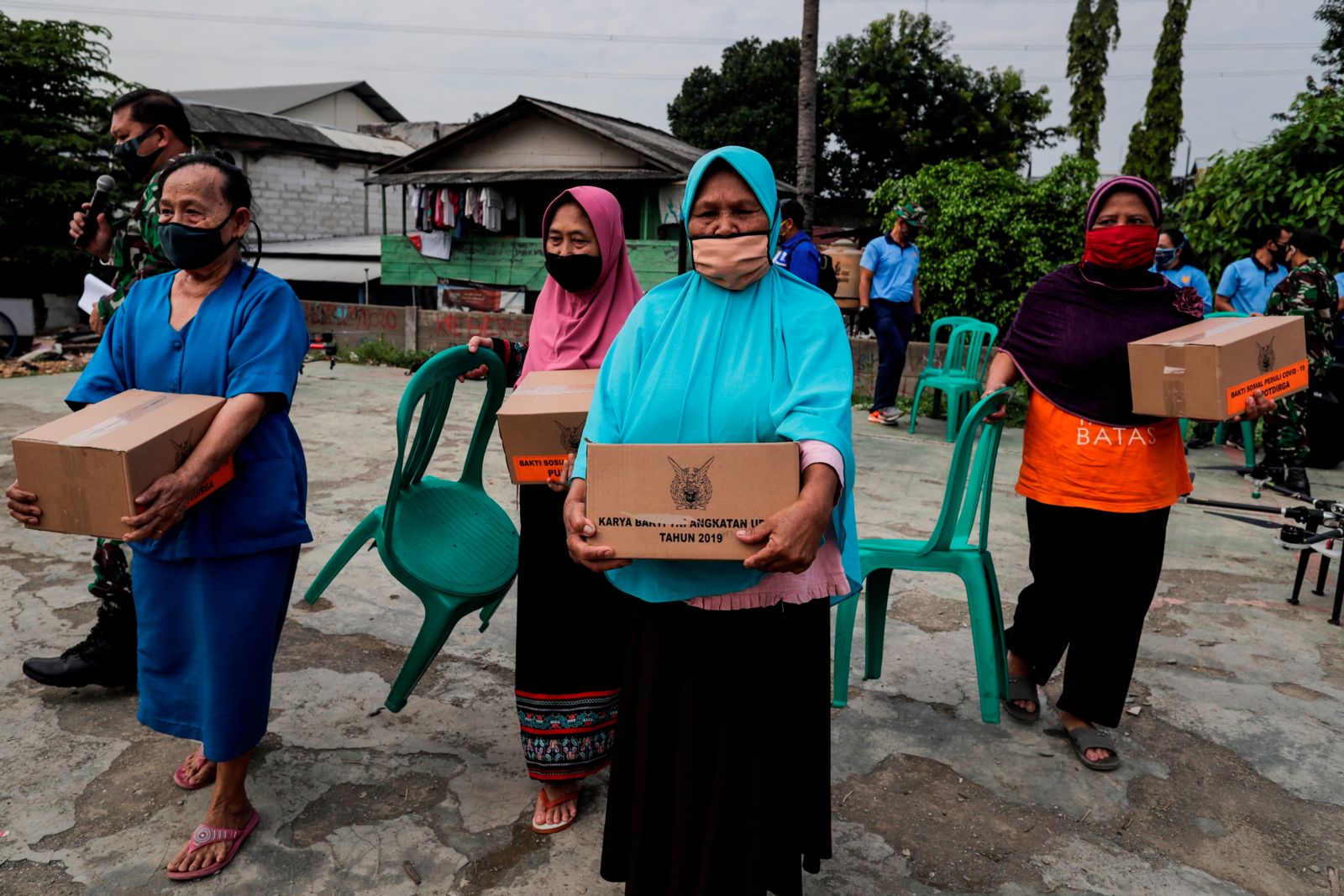 Residents carry aid packages provided by the Indonesian Air Force at a slum area in Jakarta, Indonesia, 03 July 2020. The Indonesian government has imposed a new set of regulations known as 'new normal', which will be implemented in stages. EFE/EPA/MAST IRHAM

The COVID-19 pandemic has caused the layoffs of more than two million workers in Indonesia, most of whom work in MSMEs (micro, small, and medium enterprises), retail, garment and textile industries, and tourism and hospitality, according to the Ministry of Manpower (responsible for labour-related matters). Temporary workers have also been severely affected by the pandemic. In response, the Government of Indonesia has pledged to give incentives for those workers through the “pre-employment card” program (Kartu Pra-Kerja), in addition to existing social security programs.

During this global crisis, the main human rights obligation of the Indonesian government is to provide cash benefits to cover workers’ loss of income, compared to trainings or other provisions, in accordance with the International Covenant on Economic, Social and Cultural Rights. In addition, workers should also be entitled to unemployment assistance (such as old-age or disability benefits) or various forms of severance pay. The ILO has noted the possibility of flexible implementation according to existing social security schemes in its Recommendation No. 166, stating that “different programs or schemes are intended to afford some income protection for workers whose employment is terminated.” But because existing social safety nets are poorly distributed, most Indonesians are now clinging to the pre-employment card as their only hope. In reality, this program is a regressive move by the Indonesian Government that will not fulfill and protect the right to work nor the right to employment security.

The pre-employment card was initially planned to be launched in October 2020, but due to the economic impacts of the pandemic, President Joko Widodo accelerated its launch, targeting approximately 5.6 million people as its beneficiaries. Aside from workers who have been terminated, the pre-employment card also applies to workers in informal sectors and MSMEs, and the program is primarily composed of trainings on digital platforms. People must register themselves through the website (prakerja.go.id) and their application is then assessed by related authorities. Once selected—itself a problematic process—participants are given money to pay for the training, after which they receive a certificate and various incentives.

This program, however, has drawn pointed criticism from the public. The government is spending up to IDR 20 trillion (approximately USD$ 1.4 billion), not only for the incentives, but also to pay the digital platforms as service providers, who have made significant profits from this program. The managing director of the program, Denni Purbasari, stated earlier that a total of seven service providers were appointed by the government without undergoing a tender or auction, as obliged by legislation.

The government of Indonesia should focus on allocating the resources to cover income loss of workers, especially those in more vulnerable conditions.

The program’s selection process of participants and the awarding of certifications are also flawed.  A news portal founder, Agustinus Edy, was able to qualify for the program despite stating that he was still employed while filling out the registration form. He then enrolled himself in a journalism class, but without completing the classes he was able to skip to the test section and receive a certificate of excellence signed by the CEO of Ruangguru, one of the service providers. Not only is the program not providing employment security by ensuring that jobs are available—or that skills match actual vacancies—it is providing certificates without verifying that the required training is complete.

Employment security refers to “the protection of workers against fluctuations in earned income as a result of job loss, which occurs during economic downturns, as part of restructuring, or be related to other various reasons for dismissals” as defined by the International Labor Organization (ILO). Meanwhile, the European Commission refers to “employment security” as the employability and job-to-job transitions of individuals. Both concepts relate to the protection of individuals against job losses, while also enhancing the probability of individuals to gain an income through paid work in the future if job losses are inevitable.

But the pre-employment card does none of these things. The training programs are not aligned with available job opportunities and offer no guarantee that these skills will allow workers to re-enter the labor market. For example, the training programs are highly focused on digital skills, without any explanation on how these training programs were designated, and they do not take into account the sectors where most workers have been affected by the pandemic. It is also not clear whether the government consulted with employers and companies on recruiting workers trained in the program. In addition, the loopholes in the selection process create the possibility that unqualified people can be enrolled in the program and receive certificates and incentives, discrediting the entire program.

The launch of the pre-employment card also seems to give more leniency to employers to terminate their workers under due to COVID-19, while states have the duty to ensure that termination of workers should not be conducted before taking preventive or mitigating measures, such as finding alternative employment (ILO Convention No. 158). These measures include restriction of hiring, training, and retraining, as well as reduction of normal hours of work, permissible in temporary economic difficulties with prior consultation with workers.

Even though the pre-employment card has now been launched, the government’s cash assistance and other social security programs are still not adequately distributed. In his statement on May 16th, President Widodo admitted that only 25% of cash assistance benefits had been distributed, with 75% of applicants having not yet received assistance. The government is continuing the implementation of existing programs, such as the “Staple Food Card” and “Family Hope Program” (a social assistance allowance program for impoverished families) and has increased its beneficiaries and the amount of assistance given. However, though these programs are laudable, they are managed separately from the pre-employment card, with different targets and benefits. It is not clear whether the distribution will be synergized with this new program, and whether the programs—when combined—might fulfill the minimum criteria of social assistance. However, as the target recipients of each program are different, there is a high probability that many people wouldn’t receive the same benefits due to problematic distribution.

Clearly, the pre-employment card program is deeply flawed and wholly insufficient to fulfil the right to work and the right to employment security of Indonesians in need. Prioritizing the launch of the pre-employment card also compromises the synergy and the distribution of existing social assistance programs that more directly help those in immediate need. The government of Indonesia should focus on allocating the resources to cover income loss of workers, especially those in more vulnerable conditions, such as workers in the informal economy, temporary workers, and those not entitled to unemployment benefits or assistance.

The government must properly map out workers who are experiencing income loss and classify their skills and work experiences, rather than solely providing training that covers technology-based skills and jobs. Enhanced cooperation with employers is also needed, especially in providing solutions for job opportunities after COVID-19. By taking these steps, the government could ensure that available job opportunities match with the training programs, and that such jobs generate income in accordance with decent living standards for workers and their families.

Dominique Virgil is a recent law graduate of Faculty of Law, University of Indonesia, majoring in public international law.