What is the best way for human rights activists to engage with perpetrators? There are ethical and strategic reasons to focus on accountability over understanding, but there are also costs.

When I asked human rights workers in India why the police torture people, I often received the same reply: “Because they can get away with it.” When I asked them why a police officer would want to engage in such violence in the first place, many of the same explanations came up over and over: greed, the desire for power, and bias against vulnerable groups.

India is a country where police torture is routine.

I asked these questions of human rights lawyers, activists, and educators while conducting twelve months of fieldwork in India for my book on how police officers understand violence and respond to human rights messages. But most of my in-depth interviews for the book were with police officers themselves. Through long conversations in their homes, in restaurants and cafes, and in police stations and paramilitary bunkers, I probed the moral universe the police inhabit. Like many other nations, India is a country where police torture is routine. While there are no clear statistics given that torture is difficult to report and record, local and international NGOs lament its pervasive occurrence. I wanted to know how the police understand the violence they commit and what their understanding means for how they respond to human rights efforts.

I found that police consistently and passionately defend extrajudicial violence, even at times when they could condemn it or distance themselves from it. This isn’t a knee-jerk defense of all police actions: they want to know all the details of the case to evaluate it within their own moral parameters. Distinctions based on whether the victim deserves such harm and whether the officer acted for personal gain or public good shape their conceptions of justice. For these officers, what matters is differentiating between whom they should and should not harm; equal protections would undermine justice.

This does not mean that police live up to their own conceptions of justice. They admit that they often do not. But if they did uphold their ideals, they still would not protect human rights. 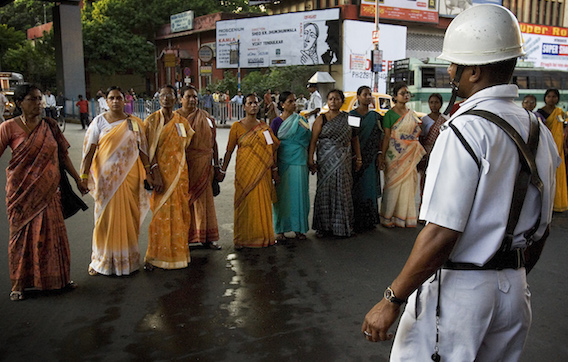 Policeman facing women in a protest march Calcutta Kolkata India. For some officers, what matters is differentiating between whom they should and should not harm; equal protections would undermine justice.

But what should activists do with such information—and should they seek to understand perpetrators in the first place? These questions are even more complex than they sometimes seem.

The identification of clear moral lines is a strength of the human rights movement, but it has also led to a tendency to form boundaries around types of people. “Saviors, victims, and savages” is the way one critic has described the imagined relationship between human rights activists, people whose rights are violated, and the people who violate them. This is a description that few human rights workers would embrace, particularly in this age in which the rallying cry of “nothing about us, without us” and the ideal of “empowerment” set the tone for advocacy.

But if activists would not readily affirm the roles of saviors and victims, they seem more willing to fix the identity of the savage. In human rights reports, perpetrators sometimes appear as pawns in a system beyond their control, as in this investigation of police torture in India. More often, their behavior is not accompanied by any reasons. Torture and other forms of violence seem not to require explanation.

Researchers also rarely probe at great depth the way perpetrators understand their own actions. Many studies, as I have argued elsewhere, offer rich descriptions of the environment that socializes or otherwise enables this violence. Scholars such as James Ron and Devorah Manekin offer nuanced explorations of how individuals respond to these external conditions. Still others such as Erica Weiss provide important descriptions of the ethical aspirations that move people who had been violent to become advocates of rights protections. But less often is there attention to perpetrators’ beliefs about why violence is right. When scholars do study perpetrators’ beliefs, they tend to suggest that these beliefs are mere rationalizations for bad behavior or an ideology that was encouraged by an authority that benefits from the violence.

Recently there has been a small but important push to understand the people who violate human rights as they understand themselves, such as evidenced by the insightful pieces from Zaira Drammis and Anna Hedlund as well as the carefully-researched chapters in Steffen Jensen and Andrew Jefferson’s volume on state violence. Increasingly, practitioners recognize the benefits of working collaboratively with perpetrators, such as a recent initiative that engages police in Sri Lanka and Nepal in designing strategies to reduce torture.

There are, however, strong ethical reasons to resist this call to understand rights violators. There is, as James Dawes pointed out, “an absolute obscenity in the very project of understanding.” In his searing book probing the inner worlds of Japanese war criminals, Dawes questions his own project, noting that there may be a moral imperative to condemn atrocity rather than try to understand it. Drawing attention to the moral ambiguity of perpetrators’ experience risks collapsing distinctions that must be upheld in order to prevent further abuse, and in order to maintain any moral sense at all. Moreover, attempting to explain something that should “defy comprehension” can actually obscure its true horror.

Yet there is an element of dehumanization in the refusal to understand why people harm others. Police are clear about this: a nearly ubiquitous refrain during my interviews with officers was that, “human rights activists do not understand that the police officer is also a man.” An irony persists when those who affirm universal human dignity cast some people as beyond understanding.

There are also strategic reasons to understand and work collaboratively with state officials who use violence—as well as strategic reasons not to. Might activists be more effective at reducing violence if they understand why perpetrators engage in and justify it? Moreover, police reform experts insist that change cannot come primarily from outside pressure—reformers must generate police buy-in.

However, outside pressure, such as protests and public reports that “name and shame” violators as well as lawsuits to hold them accountable, may sometimes be the only deterrents to state violence. Several police officers told me that they can no longer exert the force they see as necessary because of such negative consequences. The threat of lengthy court cases and negative public attention makes them, in their words, “operate less.” If “operation” means torture and execution, then this is a victory.

But their wording shows that their actions have been curtailed without being transformed. Such measures, then, may only be effective when police believe they will be caught. There is a difference between doing less harm and policing well. This latter aim would seem to require officers’ genuine buy-in, which protests and lawsuits can undermine by alienating officers from the human rights movement.

Given these tensions, what should activists do? Should activists engage with violent state officials by collaborating with them, attempting to understand them, and helping them? Or should they, in essence, see them in court? If they opt to use both approaches, how can they avoid the tendency of each to undermine the other, as state officials reject the collaboration of people who shame and sue them?

Rachel Wahl is an assistant professor in the Social Foundations Program in the Department of Leadership, Foundations, and Policy at the Curry School of Education at the University of Virginia.