Back to the Future: returning to human rights

By neglecting citizen engagement, the human rights movement has failed not only to secure all rights but has put the civil and political rights already secured at risk, including in the North. 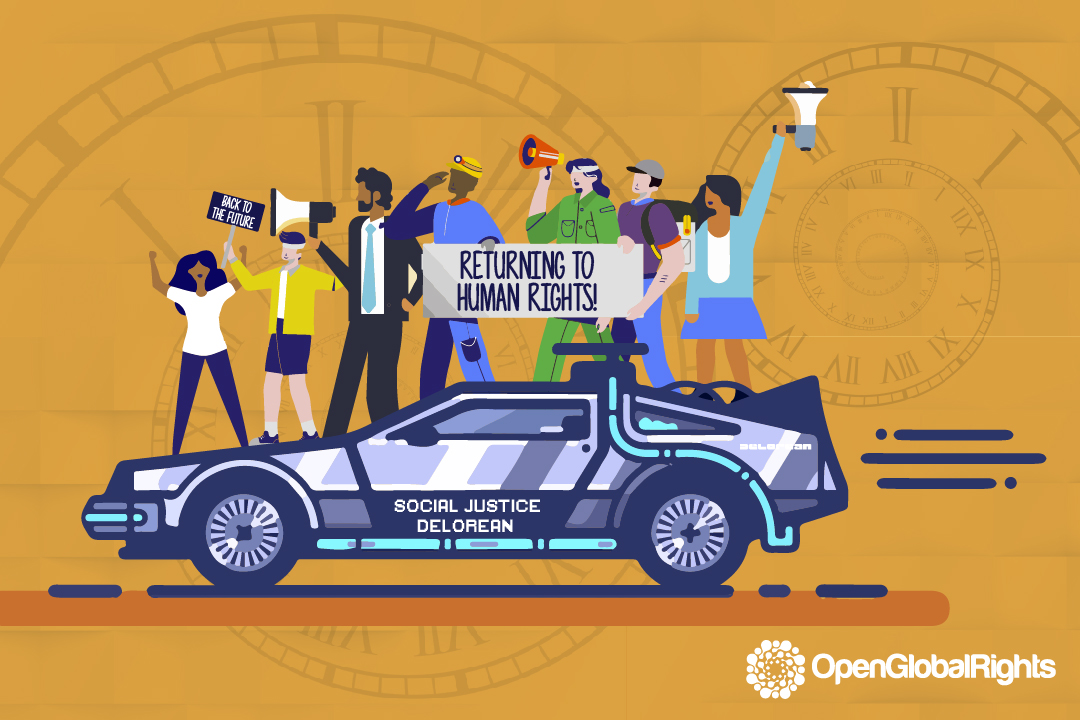 How does the human rights community imagine human rights will become a reality for all? We have yet to articulate that for ourselves, let alone for general publics. The vision of the universality of human rights and what they obligate governments universally to do must be front and center in all that we do. Without it we will remain unable to reach and enlist people everywhere to realize the human rights promise that is theirs.

The way forward requires that as a community we identify where we lost our way. Hastening the need for course corrections is the growing hostility to human rights globally and the retreat of what many, but not all, consider a human rights ally—the US. Three such corrections are especially critical.

First, for those of us in the North, our original error was to accept the bifurcation of the rights essential to living fully human lives. Repeated affirmation of their indivisibility notwithstanding, we acquiesced to their separation into two sets of rights, then proceeded to privilege one over the other, enervating the power of human rights in the process.

As we fought for civil and political rights, we expected people to manage without economic and social rights. Rather than exploring their complementarity, we stressed their dissimilarity. Regrettably, failing to pursue the full spectrum of rights together, we failed to achieve either set of rights fully—anywhere.

The limits of civil and political rights are evident everywhere. It is sufficient to look at the South African experience, where political apartheid has been eliminated while economic apartheid persists, to recognize the harm of separating the rights; and to mass incarceration in the US to know that only those whose economic and social rights are fulfilled can fully exercise their civil and political rights. The threat that gross income inequality poses to political democracy is on clear display in the US and elsewhere.

Second, from dividing the indivisible, the Northern human rights community fell into another mistake: privileging one set of states over another. We anointed those that upheld the civil and political rights we considered synonymous with human rights our permanent friends, and those that did not—favoring the other set of rights instead—our permanent enemies. Adopting the Cold War lens we failed to acknowledge Cuba’s health care a human rights achievement no less remarkable than the freedoms enjoyed in the US, and suggested that people must choose between states duties to ensure freedoms of thought, expression and association, and rights to food, health and housing. In the process, we undermined what should have been our permanent principles—the full realization of all human rights essential for human life.

Still, even within this narrow conception of one set of rights there was much important work to do. Those of us in the North leveraged our “good” states to pressure the bad ones elsewhere, and rightly celebrated our successes, even though our states were receptive only when it suited them. Thus, they could simultaneously denounce torture by others while engaging in extraordinary renditions and “black sites” themselves. This was liberalism, not human rights, and in that framework states could allow us some wins while violating human rights with impunity at home and beyond.

Aligning ourselves with one set of states muddled and degraded the human rights message, with far-reaching implications. Human rights came to be known and experienced as a political bludgeon wielded by one set of states against others, and wielded inconsistently with friends and foes. In the North, the public came to know human rights as a problem elsewhere, not a lifeline everywhere, including for them. Northern and allied states’ lack of accountability for their violations around the world fueled cynicism in the South, including among those with the most to gain from human rights. A conspicuous example is the Arab region’s decades-long experience with our good states’ double-standards and betrayal that saw them simultaneously promote democracy—while supporting and enabling tyrants—and lecture on accountability—while holding no one to account for their “mistake” in Iraq. But our work was important so we persisted to focus on what we could do, neglecting what needed to be done.

Third, over the course of decades, the human rights community developed and professionalized its work and methodologies, expanded and deepened our engagement and leverage with policy- and decision-makers throughout our good states, and achieved significant outcomes. In contrast, the community failed to reach ordinary citizens anywhere, from whom we expected little more than to allow us to document and report their experience and losses and litigate their cases, or to write letters. Failing to conceive of more than that for the majority of people, we deprived our efforts of a mobilized citizenry that comes to expect and demand human rights of those who govern. We focused on leveraging states to pressure states rather than enabling citizens to pressure theirs. Gradually, we privileged what we knew how to do over what was needed from us.

By neglecting citizen engagement, the human rights movement has failed not only to secure all rights but has put the civil and political rights already secured at risk, including in the North. Indeed, our gravest error has arguably been to imagine that we could achieve rights-respecting governments without a mobilized citizenry. We disregarded the need for movements in our efforts, despite our knowledge of the essential role of social movements in all significant social and political transformations. This was likely inevitable once we conflated human rights with civil and political rights and viewed our states as having already attained them. We, of course, recognized our states were far from perfect. But we considered mere fixes, corrections, tweaks—the realm of experts—would suffice, not fundamental transformations or shifts in power that only movements of rights claimants can achieve. The role of movements receded further from view and eventually dismissed entirely as within our purview. Fortunately they continued to form in both South and North; regrettably without us for the most part.

By privileging particular rights, states, and methodologies and expertise, we in the global North contracted the human rights vision. The vast majority of humanity came to know human rights, if at all, as irrelevant, disingenuous, and/or inaccessible. Those hostile to human rights have readily and effectively exploited this.

Reviving the vision of all rights respected by all states will point the way to what we need to do and achieve: reach and enlist people everywhere to recognize the power and potential of human rights, then support them to demand the fulfillment of human rights obligations from all those who seek to govern. This transformation requires expansion, amplification, and coordination across rights, nations, and approaches. We will know we have succeeded when states prioritize human rights in their policies, legislation, budget allocations and actions, because their citizens accept nothing less.

Can we decolonise human rights?