Countries exposed to the worst impacts of climate change, like Myanmar, should consider establishing Climate Land Banks to meet the looming problem of massive climate displacement. 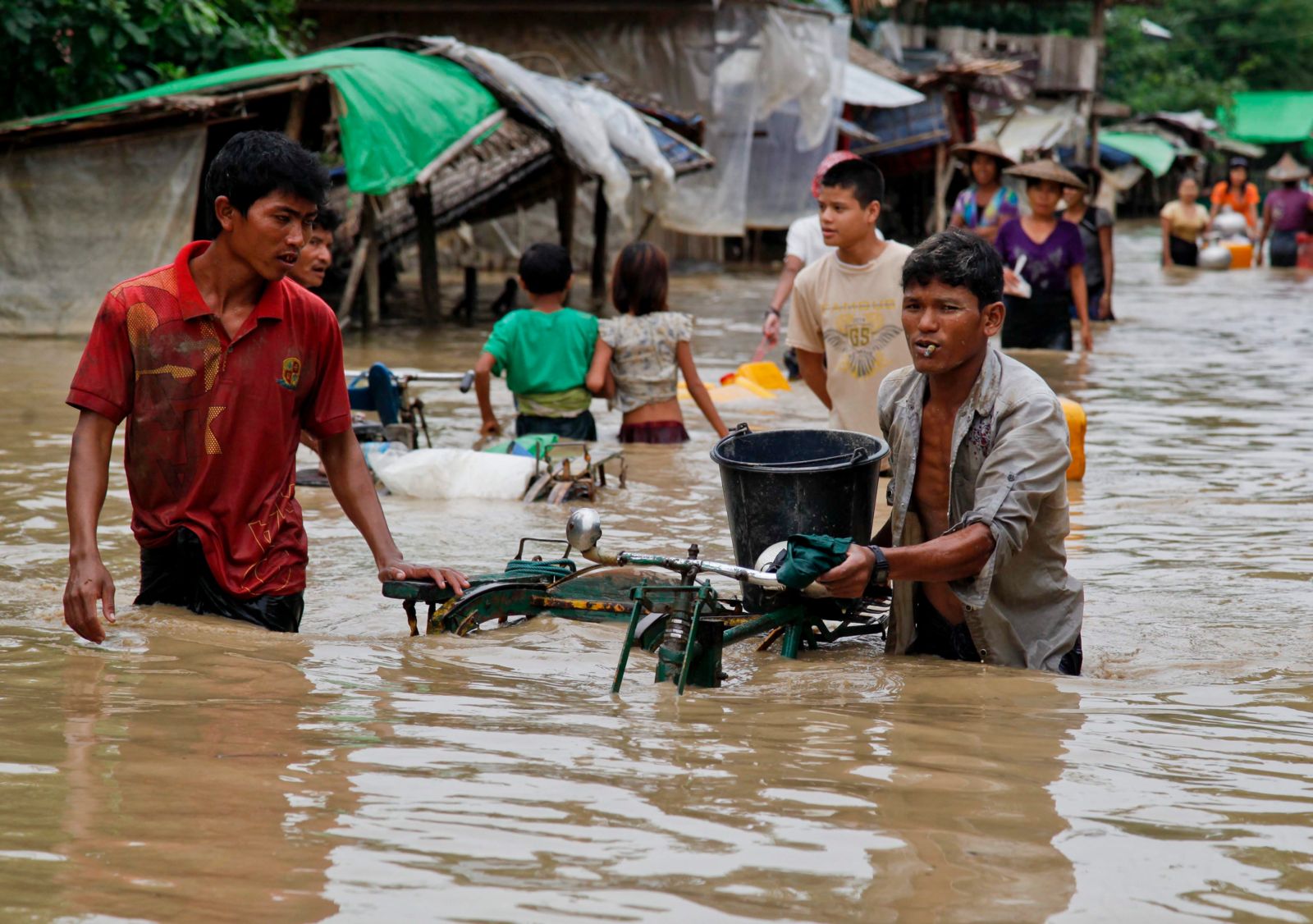 People carrying their belongings as they pass through a flooded street in Min Pyar township of Rakhine State, Myanmar, 02 August 2015.

Globally, three times as many people are now displaced annually because of extreme weather events and climate change than those displaced due to conflict. The vast majority of those displaced live in developing countries, 81% of whom reside in Asia. The planned relocation of communities from their homes and lands necessitated by the effects of extreme weather events and climate change is becoming one of the greatest threats to the enjoyment of human rights and to broader concerns of peace and security.

This is especially so in Myanmar. The country is ranked second out of 187 countries in the Global Climate Risk Index for vulnerability to climatic natural disasters, and the country remains worryingly unprepared for dealing with natural disasters. This will be only further compounded by the large-scale displacement of populations likely due to climate change impacts such as rising sea levels, coastal erosion, and temporary or permanent inundation. Millions of people may be forced to flee their homes and lands along the country’s 2000km coastline, adding to the tragic legacy of displacement in the country.

A new report argues that a Climate Land Bank offers a workable and rights-respecting solution to this impending crisis in Myanmar. And this solution should be considered by other countries facing large scale climate displacement in the years ahead.

Governments need to fully recognise their national and international obligations regarding how best to protect the rights of climate displaced persons and communities. In Myanmar, the government should give serious consideration to the development of practical measures to mitigate community vulnerability through the design and establishment of a Myanmar National Climate Land Bank (MNCLB). The Myanmar Disaster Management Law (2013), the Myanmar Action Plan on Disaster Risk Reduction (MAPDRR), the National Recovery Framework and Plan for the 2015 Floods and Landslides Disaster (2016) and other norms have been adopted in recent years, but these do not explore in any detail the question of securing land resources for families and communities permanently displaced due to climate change.

Among one of the key concerns of families either relocating or needing to relocate because of disasters or the effects of climate change, is the lack of available sites for relocation. They are concerned too by the limited support available for rebuilding homes, challenges associated with accessing services, and education and limited livelihood opportunities at relocation sites.

There is a pressing need, therefore, for Myanmar to identify and allocate land at a level commensurate with the scale of present and likely future climate displacement.  Such measures have been increasingly seen by analysts as the only feasible way by which the challenge of climate displacement can be addressed.

There is a pressing need, therefore, for Myanmar to identify and allocate land at a level commensurate with the scale of present and likely future climate displacement".

An MNCLB could act as the central institutional tool in this process. Its aim would be to set up programmes of parcels of state land in a bid to prevent land conflict and resolve climate displacement in a rights-based manner throughout the country. The MNCLB would provide a basis for developing concrete policies that tie together five vital policy threads: conflict prevention, human rights, climate change, displacement, and access to land. The central importance of land for security, stability, and economic development is already well recognised by the present government and by civil society. Indeed, civil society organizations have commenced identifying state land resources for eventual distribution to landless rural poor households as part of broader land reform efforts.

Without an MNCLB in place, the growing numbers of people facing displacement due to the effects of climate change will increasingly have nowhere to go and thus be forced, as climate displaced communities everywhere, into urban slums or new residential options that are wholly inadequate to meet their basic human rights. Arguably, failing to address this emerging crisis would clearly be contrary to a range of pre-exiting legal commitments of the government of Myanmar, both under domestic law as well as under its international obligations, including by its 2017 ratification of the International Covenant on Economic, Social and Cultural Rights.

In practical terms, an MNCLB would act as a central repository for state land that has been formally designated and held in trust exclusively for the future use of climate displaced persons and communities needing to engage in voluntary planned relocation. Once established and placed under the democratic control of the most appropriate government ministry, the MNCLB would be entrusted with identifying viable state land resources in all climate vulnerable areas in the country. These would then be earmarked and held in trust as relocation sites for coastal communities that have chosen to engage in planned relocation. The MNCLB would also be the lead agency for ensuring that climate displaced persons are able to obtain new homes and new lands on those plots and maintain government responsibilities in this regard. Once a sufficient land base has been identified and classified, the MNCLB would then begin considering requests from affected communities for new land, in accordance with agreed procedures.

A Climate Land Bank offers a rights-respecting solution for the millions likely to be displaced by climate-induced impacts in Myanmar. But it is a solution other countries facing widespread climate displacement should also consider as a means of ensuring the respect and fulfilment of the rights of affected communities.

Scott Leckie is the Founder and Director of Displacement Solutions.