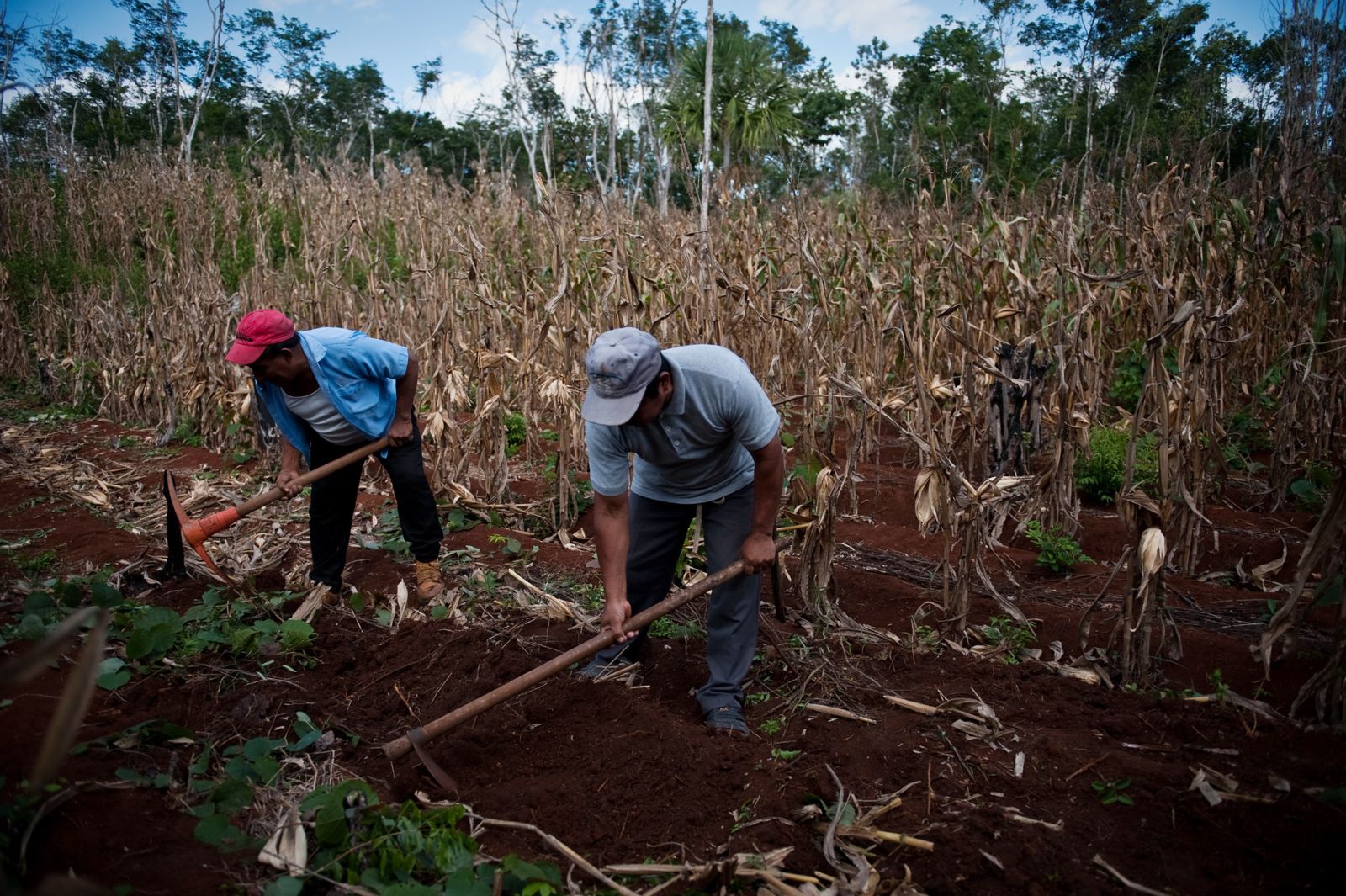 Farmers in areas like this Mayan community are finding it harder to grow food due to unpredictable weather patterns and higher temperatures. Oxfam International/Flickr (CC BY-NC-ND 2.0).

Linking individualized climate change harms to particular sources of greenhouse gas (GHG) emissions or fossil fuels is a central component of efforts to address climate change through rights-based legal action. We have written previously about the ways in which this and other key questions of climate science were teed up for the potential trial in Juliana v. United States.

While the plaintiffs are seeking review of the Ninth Circuit Court of Appeals’ split-decision to dismiss that case on standing grounds, the reports and arguments the parties offered frame up some of the key scientific questions that climate litigants will face. These include a number of recent human rights actions filed against governments around the world, such as the petition to the UN Committee on the Rights of the Child (CRC) filed by 16 young people, among them Greta Thunberg, and the complaint to ten United Nations Special Rapporteurs filed by several Native American groups in the United States.

The parties’ experts addressed source attribution by presenting competing approaches to calculating the share of net global emissions attributable to the United States as a sovereign government; the temperature increase that might correspond to those emissions; and the causal relationship between those emissions and weather-related events such as heat waves, severe storms, droughts, and wildfires. The parties’ experts addressed impact attribution by debating the connections between downscaled climate impact data and plaintiffs’ specific injuries, whether it is scientifically sound to draw inferences from general trends, and how to account for compounding environmental factors.

Two recently filed rights-based actions raise, or could raise, similar issues. First, in their petition addressed to the United Nations Committee on the Rights of the Child, youth petitioners argue that five respondent nations have done too little to address emissions despite knowing how carbon dioxide emissions impact climate and signing on to the United Nations Framework Convention on Climate Change nearly three decades ago. They argued that the Convention obligates them to do more to protect petitioners’ rights moving forward. (The named countries are Brazil, Argentina, France, Germany and Turkey.)

The science describing causal links between climate change as a whole, individual countries’ emissions, and individual harms will remain a central feature of these kinds of disputes.

Petitioners also argued that each respondent has delayed making deep cuts to their national emissions, has offered nationally determined contributions that are inconsistent with limiting warming to 1.5°C (and failed to meet even those), and has failed to leverage their role in the G20 to pressure even larger emitters—like the United States, China, and India—to do their part. The petitioners’ arguments about emission contributions and national responsibility are similar to those raised in Urgenda v. Netherlands, and are based on IPCC reports and other scientific research on divvying up the remaining carbon budget among countries.

Though the filed responses are confidential, one can infer that they may well raise many of the same points raised by the Juliana defendants. For starters, they might argue that a first country to make deep cuts would only serve to buy others time to delay making their own deep cuts, and those political dynamics are complex and unquantifiable. They might argue that neither sea-level rise nor specific extreme weather events nor individual psychological harms can be fairly attributed to any particular country’s emissions.

For their part, the youth petitioners raise arguments designed to undercut that objection: they seek prospective relief, rather than retroactive liability, and argue that under applicable human rights law each state is responsible for its sovereign actions and inactions to any degree they contribute to climate change. If the Committee favors these arguments, proving source attribution will be easier for these petitioners than for the Juliana plaintiffs. Yet, if the Committee agrees, tailoring recommendations for how much each respondent needs to change to meet its obligations may still require some degree of country-by-country attribution.

The youth petitioners seek prospective relief, rather than retroactive liability.

In the second instance, a group of four Tribes in Louisiana joined one in Alaska in filing a complaint to ten United Nations’ Special Rapporteurs alleging that the United States, Louisiana, and Alaska have violated their human rights by failing to ensure that appropriate relocation and mitigation takes place in the face of increasingly severe climate-driven challenges. The Tribes limit their allegations to the United States’ failure to act in response to known and accelerating climate-driven harms, and thus far do not attempt to draw a link between US policies and their contribution to climate change. Still, one can expect that a response from the US could raise issues that are comparable to those that featured in its response in Juliana.

It is conceivable, for example, that the government will respond that without specifically quantifying the degree to which the US, Louisiana, or Alaska have generated emissions causing sea-level rise, those states cannot be held responsible for its impacts. The government may also argue that the Tribes overlook other compounding factors like land management changes, population growth, and shifting economics that play a role in driving the displacement they describe. The government may further argue that individual weather events flooding the Tribes’ land are not attributable to the US or the individual states, or at least not attributable to them alone. The causes of land loss in the Gulf of Mexico are famously complex, and include sea level rise, changes in sediment flow from upstream rivers like the Mississippi, and subsidence associated with oil and gas extraction.

The Tribes, in reply, might counter that the federal and state governments’ obligations to assist in adaptation do not flow only from their role in causing climate change, and that in any event the role played by each has arguably been significant.

Our work at Columbia University’s Earth Institute on The Law and Science of Climate Change Attribution tracks developments on these fronts, and creates new resources for practitioners and researchers working in the field. For instance, we thoroughly assessed the Juliana parties’ publicly available expert reports, including both plaintiffs’ and the government’s key reports on the US government’s contribution to climate change, and the plaintiffs’ Notice of Supplemental Disputed Facts, which was filed after the government submitted its expert reports. All of these are available in the Sabin Center’s database.

The battle of the experts that began to play out in that case, and that may be teeing up in the case before the CRC, are critical, because as these human rights actions demonstrate the science describing causal links between climate change as a whole, individual countries’ emissions, and individual harms will remain a central feature of these kinds of disputes.

As individuals, communities, Tribal Nations and others bring rights-based claims before international bodies, they are likely to face objections that echo those raised in Juliana and other national legal action, and they will need to bring sophisticated responses to bear.

Michael Burger is the Executive Director of the Sabin Center for Climate Change Law, and a Senior Research Scholar at Columbia Law School.

Jessica Wentz is a non-resident senior fellow at the Sabin Center.

Daniel Metzger is a Climate Law Fellow at the Sabin Center.