As international rights groups move “closer to the ground” and domestic groups reach out internationally, the human rights community is converging. Can we harness this movement towards the middle to more effectively realize rights?

The international human rights movement is wrestling with a basic question: if all real change takes place at the local or national level—that is, human rights can only be realized by actual human beings living in specific contexts—what does it mean to be “international”? Indeed, as the movement has shifted focus from developing and strengthening international norms to implementing and realizing rights on the ground, there has been a re-calibrating of the balance between global and local actors. Moreover, some strong NGOs in the global south are actively seeking different sources of authority, knowledge, framing and agenda-setting power. They are challenging northern dominance and developing their own capacity to shape global debates. At stake is the future effectiveness of the movement in securing rights for people worldwide.

While the global/national distinction is not always useful—some organizations do not fit into either category—it is not irrelevant either. Over the past 40 years, having these two sets of organizations often made great sense, as each brought significant comparative advantages to the table in terms of realizing rights. Nonetheless, as the number and capacity of national and regional NGOs has grown—and as priorities have shifted to implementation of rights in national contexts—these  groups have also become more assertive. 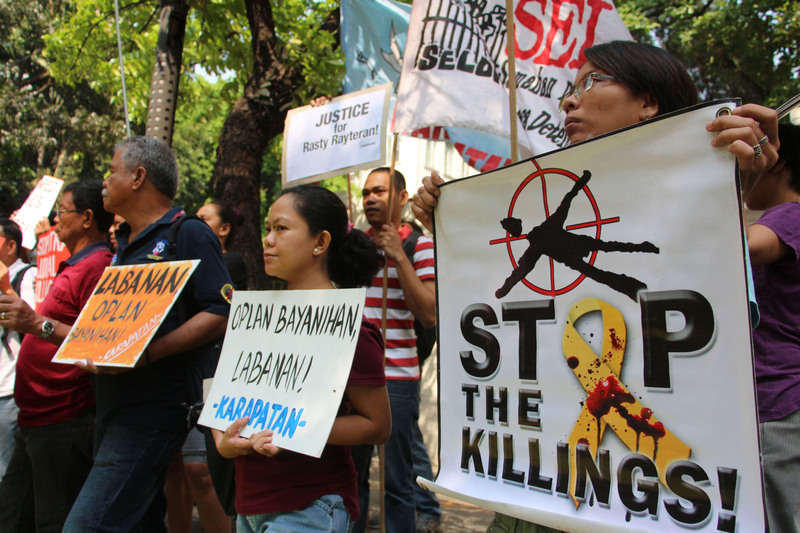 Members of the Filipino human rights NGO, Karapatan, protest in Manila. The number of national and regional NGOs is growing and these organizations have also become more assertive.

Paradoxically, international groups have also grown larger and more influential. In 2005, the New York based Human Rights Watch had 221 employees and an annual budget of about $25 million. Today, HRW has over 400 staff members and a budget of about $75 million.

In response to these dynamics, two complementary tendencies are now at play. The first is for international groups such as the Commonwealth Human Rights Initiative (in 1993), Civicus (in 2002), and Amnesty International (today) to relocate their headquarters to the global south, in an effort to be “closer to the ground”. This strategy differs from opening offices abroad, since the idea here is to shift management and decision-making from north to south. The goal is to be closer to the problems and to their solutions or, as in the case of some international NGOs already headquartered in the global south—such as the Brazilian group Conectas and the Thailand-based Asian Forum for Human Rights and Development (FORUM-Asia)—to facilitate south-south exchange, solidarity and effectiveness.

Yet not all groups are moving south—nor should they. International NGOs often have good reasons for continuing to be based in global capital cities such as New York or London, including security, access to key policymakers and proximity to funders. In addition, if these groups focus on UN advocacy, it makes sense for them to be headquartered in New York or Geneva. And some global rights actors focus on areas where both national and international dynamics coincide, such as business and multinational corporations. These non-state actors operate globally, but have myriad local impacts, and organizations such as the Business and Human Rights Resource Center (BHRRC) play a vital role—as a platform or hub—at the global middle.

If the entire movement were only made of networks of national organizations, it would suffer in effectiveness—especially for some of the hard international cases.

There are also pitfalls to the tendency of national groups to be more involved at the international level. National groups may bring an important perspective, but they may also not be focused on transnational issues or global trends. They may, not surprisingly, choose not to engage on distant problems, especially if they have built up local expertise. The idea that a Brazilian or South African organization would suddenly devote serious effort to events in Syria may seem like an unnecessary and even illegitimate diversion. In short, if the entire movement were only made of networks of national organizations, it would suffer in effectiveness—especially for some of the hard international cases.

Additionally, convergence towards the global human rights middle requires new funding mechanisms to geographically diversify the human rights funding base, while hopefully bringing more money into the movement overall. As national groups play stronger roles at the international level, they will increasingly be able to seek national or regional funding for their work. This is a monumental challenge, given the fact that national philanthropic cultures vary so much, and that human rights NGOs still need to convince many domestic philanthropists to contribute to their cause. Still, there is hope. For example, the International Human Rights Funding Group (IHRFG) recently organized a trip to meet with Brazilian philanthropists with the idea of strengthening human rights philanthropy in that country.

Moreover, with realization of rights on the local level as the core focus, the international human rights movement needs to develop stronger ties to national social movements. The International Federation of Human Rights (FIDH) has always prioritized space at the global middle to develop strategy aimed at achieving results. Newer global networks like the International Network for Social, Economic and Cultural Rights (ESCR-Net) and the International Network of Civil Liberties Organizations (INCLO) are doing the same. For these groups, the epistemological basis for strategy-development is a deep understanding of national experiences, and a close attention to domestic policymaking. Similarly, the women’s rights movement has many examples of organizations operating at the global middle, such as the Association for Women in Development (AWID).

Convergence is happening, driven by a growing emphasis on the realization of rights on the ground. But it is not without challenges. International groups may or may not have the legitimacy to push for local solutions, and are competing for funds and attention with national groups. National groups operating internationally will have a natural tendency to bring home results to their own context, for many reasons. And there will be casualties along the way. But convergence is still an important trend that is worth understanding and supporting moving forward.