If most people always wanted to do the right thing, democracies would not need to be concerned about human rights. But because you can’t trust unfettered majority rule, the purpose of human rights is, at least in part, to be a check on majority overreach.

This doesn’t mean human rights groups can be indifferent to public opinion. Shaming—the human rights movement’s central tool—won’t work if public revelation of governmental misconduct is met by approval rather than condemnation. So the human rights movement must remain attentive to shaping and sustaining sympathetic public opinion. That is true even in dictatorships, which can never rely solely on coercion to retain power. Who can quarrel with the idea, advanced by other authors in this series, that human rights groups are better off knowing what the public thinks about issues of concern?

But that straightforward proposition can also lead one astray. The relevant public for the purpose of shaming a government is often not the public at large, but a subset of the population. Unless a poll drills down to this particular sub-group, it may divert attention from the most important facts and arguments.

Occasionally a human rights issue is big enough—CIA torture in the USA for example—that almost everyone has an opinion, and policy makers must keep this broad public perspective in mind. But few human rights issues rise to that level of public awareness. These days I’m struck by how few people outside of Syria have heard of barrel bombs—which the Syrian government uses to indiscriminately kill civilians and decimate civilian neighborhoods in opposition-held areas—let alone hold views on what to do about them. The same can be said for many other current issues: slaughter in South Sudan, abusive civil war in Yemen and Libya, the plight of the Rohingya in Burma, as well as heightening repression in Egypt, Russia and China. 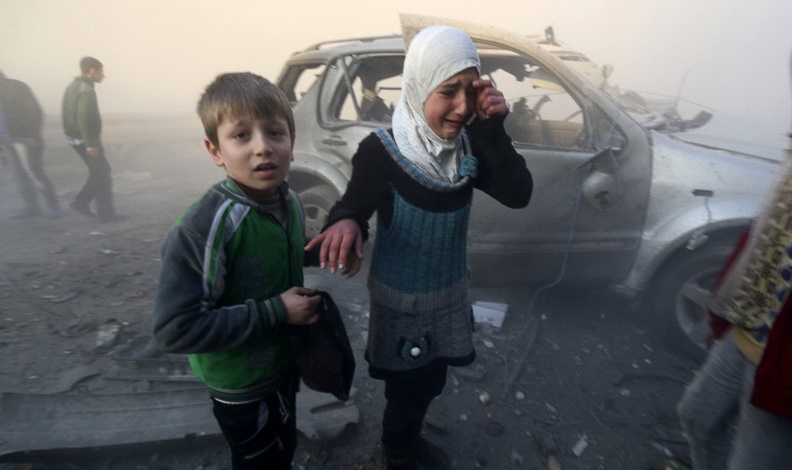 The aftermath of a barrel bomb detonation in Aleppo, Syria.

Only a small percentage of the general population outside these countries will ever develop views about these issues. Allowing human rights messaging to be guided by general opinion polls may leave us overvaluing opinions that simply don’t factor into the true political equation. Having an opinion if asked (such as polls described here and here) is not the same as having a pre-existing concern, let alone being mobilized sufficiently to vote or act upon that concern.

Allowing human rights messaging to be guided by general opinion polls may leave us overvaluing opinions that simply don’t factor into the true political equation.

Public opinion is undoubtedly firmer on domestic than foreign rights issues. But even then, publics often think that the abuse affects only marginal parts of the population. In these cases, strong public sentiment is more the exception than the rule. Moreover, many domestic issues are complicated, such as unjust criminal prosecutions or certain questions of discrimination. Others are hidden, such as torture. And some take place subtly, such as types of censorship or restrictions on civil society. Any such complexity tends to impede the formation of broad public opinion.

As a result, most human rights shaming is done by aiming at not the general public, which on many issues pays little attention, but the specialized audience that does. This includes policy makers, journalists, think tanks, advocacy groups, news buffs, exiles and refugees, and a relative handful of others with an interest in the subject. This audience is small but important: its members often include a good number of the professional associates of policymakers who are the targets of advocacy, as well as journalists who work for the most influential media and the experts who often serve as their sources.

Indeed, policy makers often effectively treat the traditional media’s coverage of an issue (when there is a free media) as a surrogate for public opinion. They do so both because of the usual absence of other measures of public opinion and because of the media’s role in shaping public opinion. Obviously, the traditional media can still convey a plethora of views, and nothing stops people from disagreeing with what the media say. But the more a general consensus emerges in the media, the more policy makers respond to that consensus. Former US president Bill Clinton, for example, entered the Yugoslav war not because there was a clamor among the general public, but because he was being pummeled for his inaction by the editorial pages of the New York Times and the Washington Post.

However, there are two relatively recent and notable changes in this traditional understanding of human rights shaming. First, the rise of social media means there are more people influencing public opinion than traditional journalists, more ways for people to learn about human rights issues than from the mainstream media, and more ways for policy makers to discern the views of a relevant public than by consuming news via newspapers and broadcasts. The public in democracies has long been able to voice concerns through phone calls, letter writing, emails, and the like, but social media provides a new, easy-to-use way to express oneself with relative informality. Most social media postings remain invisible to policy makers until they reach a critical mass. Then,  those in power take notice, even if the traditional media are ignoring an issue or expressing different views.

Second, some human rights abusers have become much more sophisticated about using the media, both traditional and social, to influence global opinion. We have moved from the wooden prose of Pravda to the slick productions of Russia Today, from the clunky predictability of Xinhua to the polished, user-friendly CCTV. Some of this use is straightforward self-defense: whether denying abuses among the Russia-backed rebels in Ukraine, or disparaging lawyers arrested for trying to defend the rule of law in China. Backers of Israel, Rwanda, Sri Lanka and Bahrain stand out for making particularly aggressive use of social media to deflect attention from those governments’ abusive conduct.

But some of this deployment of social and traditional media is more insidious, challenging not just particular portrayals of abusive conduct but the core values of the human rights movement. A group of African leaders with blood on their hands—most prominently, Rwanda’s Kagame, Sudan’s Bashir, and Uganda’s Museveni—claims that international justice for their victims reflects bias against Africans, a so-called new colonialism. Russia, China, Turkey, and others deploy nationalism to undercut the legitimacy of domestic human rights activists. Brazil, India, and South Africa, to varying degrees, revive colonial-era arguments of imperialism to deflect pressure to act on rights concerns. The British government portrays human rights as a European imposition. Many cite terrorism as a sufficient threat to justify otherwise indefensible rights practices.

These arguments are concerned not only with defending particular practices that violate human rights but more fundamentally, with undermining the legitimacy of human rights in general. They call into question whether governments facing serious problems—or even concerned with their self-preservation—should be limited by rights emanating from the inherent dignity of each individual. In this sense, they are as much existential as tactical attacks.

These existential challenges do not require the kind of specialized knowledge that dominates most human rights debates. Broad appeals to national pride can resonate with anyone, and indeed the aim is often to enlist an otherwise disengaged general public to override more informed actors who might otherwise dominate public debate. In these circumstances, when emotional appeals to majority opinion are used to neutralize rights constraints, it is essential to have a clear understanding of what arguments work best with the general public.

Even non-state actors are getting into the game of appealing to a broader public. The self-proclaimed Islamic State, or ISIS, has been remarkably successful in attracting a following through its sophisticated use of social media and slick video clips. Some of its propaganda tries to romanticize jihad or life in the caliphate; other attacks the rights movement more fundamentally, rejecting rights constraints in favor of its strained interpretation of Islamic law. Countering ISIS requires not only the kind of military strategy that is now being unleashed in Iraq and Syria, but also an ideological challenge capable of dissuading those who might be to attracted to this rationalization of summary execution, enslavement, and rape. Polling among those targeted by these messages can help to shape the most effective response.

These observations about the role of public opinion can also be applied to arguments about the need for the human rights movement to build a broad social base. In principle, for reasons of political clout and economic backing, a broad social movement is desirable. But given that rights groups, like everyone else, have limited resources, any particular organization must ask whether its resources are best deployed toward building a mass movement or pursuing advocacy addressed to more targeted audiences.

So, yes, the human rights movement should use opinion polling, but let’s be clear what it’s for. For some issues, the general public in a country is a key audience; in these cases, general polling is a helpful tool. But for others, the general public is less important than particular, more informed and influential subsets. We should be careful not to let general polling divert us from understanding the more targeted audiences that often matter most.