The International Criminal Court has failed to live up to expectations that it would mark the end of impunity.  Beset by controversy, and its continued relevance under challenge, the Court still deserves the patient support of all who believe in international criminal justice.

The International Criminal Court (ICC) is back in the news. Pressure is growing on Palestinian Authority President Mahmoud Abbas to accede to the Rome Statute; if he does so, the ICC might gain the authority to investigate alleged war crimes in Gaza and the Occupied Territories.  Just a few weeks ago, “citizen” Kenyatta (he stood aside as Kenyan President for the day) appeared briefly before the ICC, the first sitting head of state to do so. Further, there are calls for the UN Security Council to refer the situation in North Korea to the Court; and renewed calls for it to do the same in Syria (a previous vote was vetoed by Russia and China). 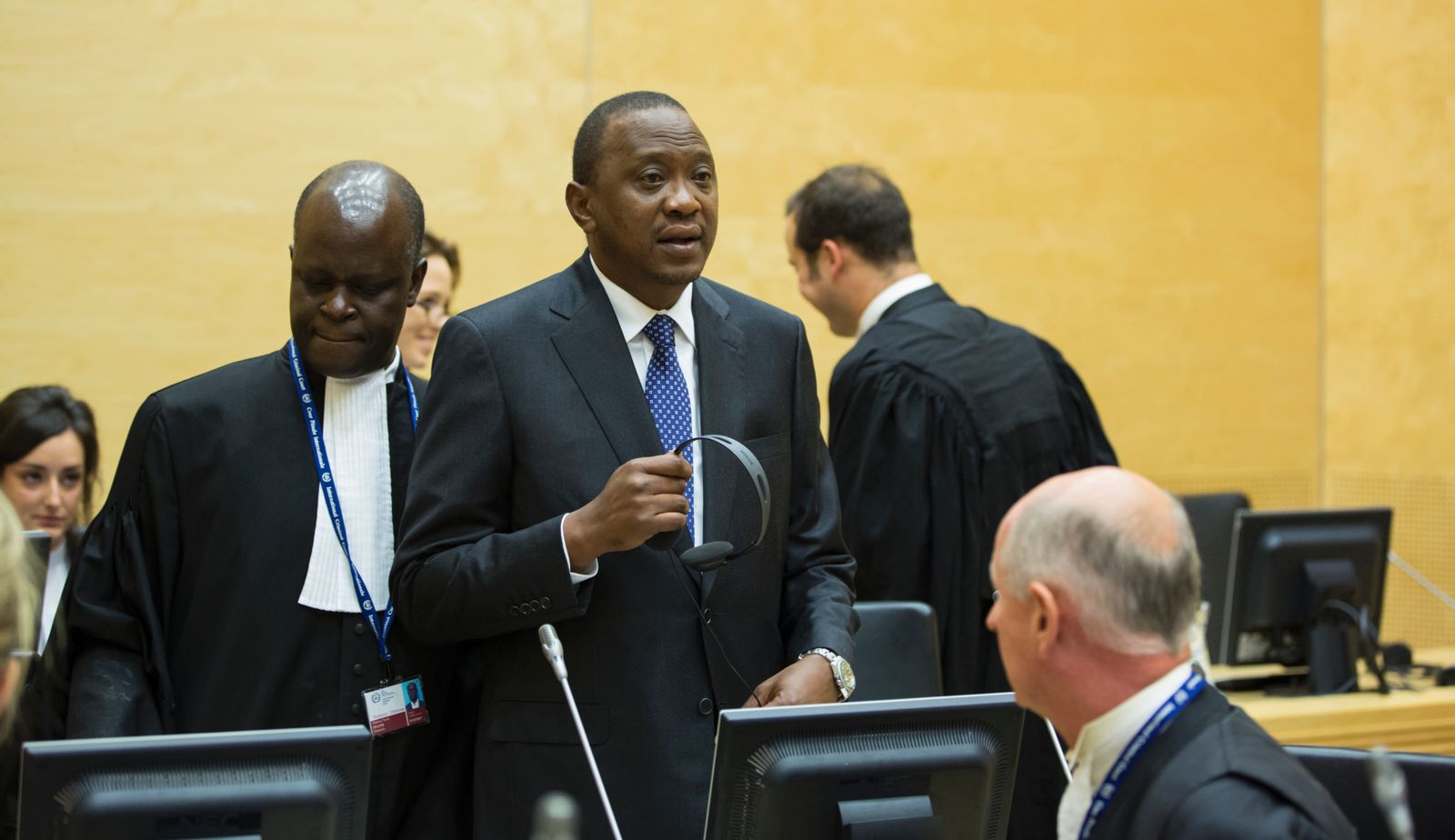 Uhuru Muigai Kenyatta appeared briefly before the ICC, the first sitting head of state to do so at the Status conference on October 8, 2014.

These appeals to international justice, however, occur amid a noticeable disenchantment among many who support the Court. The establishment of the ICC was heralded as a momentous breach in the mighty dyke of impunity, behind which powerful leaders had shielded themselves from scrutiny or punishment. The actual practice of the Court, however, and the ensuing politicking and backsliding surrounding it, has produced more prosaic assessments.

It’s fair to say that there is deep unease even among some supporters of the Court about its possible engagement in Palestine or Syria. It may simply run up against the political and practical difficulties that have so bedeviled its work elsewhere – in Sudan, Kenya, Libya, and Uganda, for example. It might also result in more ignored arrest warrants or failed cases, and charges of bias. This would only serve to further weaken the Court.

Certainly, some of the criticism of the ICC is made in bad faith, to discredit a Court at least some still fear. But there is growing bona fide disenchantment with the Court, from those who share its goal of punishing the worst international crimes to break the cycle of impunity. This is grounded in complaints of the ICC’s disregard for negative local impacts, its alleged politicization and its ineffectiveness.

There are increasing claims that the ICC’s pursuit of justice in particular countries is harming the pursuit of other goals, including peace, political stability or a democratic transition. This is hardly a new debate, and one unlikely to end anytime soon. However, it’s been brought into especially sharp relief by the cases against Kenyan President Kenyatta and his Deputy, William Ruto. Both ran for office and won election in 2013 despite the ICC indictments that had been issued against them. Backed by the African Union, the two have successfully portrayed the ICC’s pursuit of justice as a vendetta that if realized would plunge Kenya into chaos. This has been helped by the less visible support of the US and others, keen to keep Kenya onside in the fight against Islamist militants in neighbouring Somalia.

The Court is also accused of being ‘politicized’, or somehow pursuing the agendas of powerful states. This perception may arise because of a disconnect between what the Court is expected to do, and what it is actually legally permitted (or obliged) to do under the Rome Statute. For example, people demand to know why the Court investigates allegations of war crimes in Libya but not in Gaza, and in Darfur but not in Syria. The answer, of course, is that the Court has no choice; the Security Council referred these two non-party states to the Court.

But it’s not a complete answer, because the Security Council is a political, not a judicial body. Its power to pick and choose which situations are investigated sits uneasily with the idea of impartial justice the ICC is meant to embody.

Linked to the politicization charge, the Court is accused of focusing solely on Africa, as all 8 of the countries where full investigations are underway and indictments issued are in Africa. The fact that in 5 of these cases the country itself asked the ICC to open an investigation, and in 2 others (Sudan and Libya) the situation was referred to the ICC by the Security Council, ought to discredit the charge of bias.

But it persists, and perhaps for understandable reasons. After all, Afghanistan and Colombia are party to the Rome Statute, yet the ICC’s involvement in these violence-wracked countries has been limited, so far, to preliminary examinations. There may be good legal and practical reasons for this, but these are not well understood.

Finally, the Court is seen as tardy and ineffective. After more than a decade in operation, the ICC Prosecutor has brought only 21 cases (involving some 30 defendants); only one of these cases has definitively concluded. Several are under appeal, and in several more the defendants are not in custody, so the trial cannot begin. The prosecutor rightly points to the complicated and costly procedures involved in pursuing fair international justice, accumulating evidence across borders, and protecting witnesses.

If one believes in international criminal justice, surely the task must be to make this Court succeed

But nevertheless few will comprehend how a budget averaging well over $100million/year brings such few results. The states parties to the Rome Statute are increasingly loathe to accept increases in the ICC’s budget.

In the face of all these difficulties, there is renewed attention to the Court’s role in encouraging domestic prosecutions. The idea here is simple. The Court must always show it is acting only because national judicial efforts to punish serious international crimes are absent, or are a sham. Therefore, the threat that the Court might act ought to encourage domestic accountability efforts. Interest in this dynamic (called ‘positive complementarity’), has risen alongside falling expectations regarding the Court’s own prosecutions.

But even here, the evidence is mixed. Neither Sudan, nor Uganda, nor Kenya, nor Libya, for example, has seriously pursued domestic accountability efforts even as they have sought to discredit, ignore, or slide out from scrutiny by the ICC. On the other hand, the process of ratifying the Rome Statute has led dozens of countries to rewrite their criminal laws to ensure clear definitions of international crimes, and with clear duties to prosecute those responsible. Though modest, there has been an upswing in such prosecutions, although usually for decades-old crimes.

Indeed, given all of this, rather than a breach in the dyke, it increasingly feels as if the establishment of the ICC, and its first few years of existence, might have been the high water mark for international justice, at least in this generation.

How to conclude? Perhaps two points are worth emphasizing. The notion that the most powerful leaders could be punished for crimes of state that went largely unpunished for centuries, is so novel that it will take decades to embed in international politics. No single institution can carry the burden of doing so, and it was foolish to expect so much of the ICC. Supporters of the Court need to consider that its existence is no guarantee of its continued relevance. There is no shortage of failed projects aimed at advancing the international rule of law. Modest progress is likely the most that can be hoped for, and where possible we should refrain from insisting that the ICC take on more unwinnable cases.

At the same time, the Court’s critics should reflect. Many of them insist they are in favour of an international criminal court, just “not this one”.  Fair enough, but the fact is if this Court fails, there will not be another one (at least not for a very long time). If one believes in international criminal justice, surely the task must be – through patient effort – to make this Court succeed.

Of Crystal Balls, Pandemics, and Resilience: why foresight should be in the DNA of the social change field