Delivering justice for victims is the raison d’etre of the ICC. But making justice count for victims requires much more than fair trials in a Hague courtroom.

A permanent headquarters for the International Criminal Court (ICC) is set to open later this year in The Hague. The city, known for its institutions devoted to peace and justice, is in some respects a fitting home for the court.

But The Hague is not where the ICC matters most.

Where the ICC truly needs to matter is in the countries—and indeed in the communities— affected by the crimes the court will try. These are the places where victims and their families struggle to cope with the aftermath of mass atrocity.  And these victims and communities—whether in Bangui, Benghazi, or Bunia—are the court’s chief stakeholders and should be at the heart of the ICC’s work.

These victims and communities—whether in Bangui, Benghazi, or Bunia—are the court’s chief stakeholders and should be at the heart of the ICC’s work.

Human Rights Watch’s recently published a report on how the ICC is dealing with atrocities committed during the 2010-2011 post-election crisis in Côte d’Ivoire after Laurent Gbagbo lost the presidential election in late 2010 to Alassane Ouattara. It shows just how far the ICC still needs to go to make its work accessible, meaningful, and legitimate in local communities.

Since investigations began in Côte d’Ivoire in October 2011, the ICC prosecutor has only opened cases related to alleged crimes committed in Abidjan, the country’s economic capital, and by forces affiliated with Gbagbo. This despite the well-documented facts that crimes were committed both by forces allied to the former president and those allied to Ouattara, the current president, and that many of the worst atrocities occurred outside of Abidjan.

There was a certain logic to the limited focus of the prosecutor’s initial investigations. Gbagbo was already in detention and investigators had ready access to evidence within Abidjan. Investigating additional incidents would have increased logistical and security challenges.

But that initial decision to focus on pro-Gbagbo forces has persisted for several years. In the meantime, the prosecution’s one-sided approach has polarized opinion about the court inside the country. The victims’ high expectations for impartial justice before the ICC—fueled by the fear, especially among the victims of crimes by the Ouattara-allied forces, that they would never get it at home—have given way to frustration regarding a lack of progress in prosecuting all sides.

The one-sided prosecutorial approach thus far, however, was compounded by the Court’s outreach efforts, led by the ICC Registry. Resource constraints meant the Registry 0prioritized efforts to engage with victims of the four or five specific incidents in the cases opened before the court. A separate Registry unit with specific responsibilities to inform victims of their rights had some broader programs to reach other victims. But resource constraints also forced a narrower focus at times. Of course, it is essential to provide information to these victims, who have particular rights, but it should not come at the expense of making the ICC’s proceedings more widely accessible. 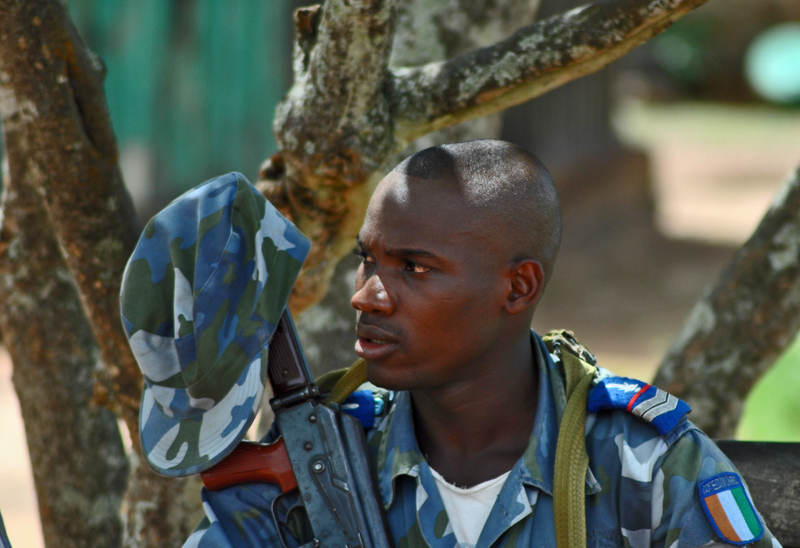 A pro-Gbagbo guard mans a checkpoint near Duekoue, Ivory Coast in 2011.

The combined effect of both the prosecutor’s failure to pick the cases that would address a broader range of crimes—and perpetrators—and the Registry’s failure to reach out to all sides on the ground was clear in interviews with Ivorian civil society members. “Victims that belong to the other side do not believe in the ICC,” said one human rights activist. “It is painful to say this because normally a victim does not have a side.”

The ICC prosecutor should do more to take the experience of victims into account when making the difficult decisions about whom to prosecute and for what, including by strengthening consultation with victims.  The experiences of victims will be diverse, and will raise expectations that will be difficult to ever fully meet. But since the court can only try a small fraction of those responsible for the worst crimes in any country, it is important for the prosecution to select cases that will have a broad enough impact to leave people in the country with the feeling that a measure of justice is being done. And to be effective, the Court’s outreach and specialized programs directed to victims need to reach a much larger local audience than the direct victims whose cases form part of an indictment.

Expanded investigations in Côte d’Ivoire this year could mark a fresh chapter. There are also positive signs across the countries where the ICC is investigating possible crimes that ICC officials—who have been making real efforts to address a number of the Court’s growing pains—are looking anew at how they can improve their impact. Strengthened policy commitments to consult victims and a more open-ended investigative strategy by the prosecutor’s office, including a commitment to consistently investigate all sides at the same time, as it is currently doing in the Central African Republic, hold real promise. Planned Registry reforms to bolster the court’s offices on the ground are also essential.

Poor choices or strategy are not the only reasons the ICC’s work lacks impact. A lack of resources is also to blame. The need to deal with cases in other countries with limited resources has been cited by the ICC prosecutor to explain the delay in opening additional investigations in Côte d’Ivoire . This is likely to be a persistent challenge for a prosecutor’s office tasked currently with working simultaneously in eight countries. Funding for outreach across all the countries where the court has opened investigations has failed to keep pace with the court’s needs.

ICC member countries have been reluctant to increase funding. Perhaps unsurprisingly so, given the financial constraints governments everywhere are facing. Indeed, the ICC’s resources will never be unlimited, and Court officials will need to be strategic in their decisions. They likely could have made some different choices in Côte d’Ivoire even with the resources they had.

But mounting demands for accountability and the multiplying workload of the ICC mean that the court will not be able to deliver a more meaningful justice for victims and affected communities without at least some increases in the Court’s resources in key areas. If ICC officials do their part by prioritizing local impact, ICC member countries should show they are willing to help fund a vision of a court that can finally make justice count where it matters—in the countries where the atrocities took place.