Technical legal arguments are insufficient to address growing disenchantment with the ICC. More must be done to extend the reach of international justice to the powerful.

This summer’s firestorm over the South African government’s defiance of a court order to arrest  Omar Al Bashir, who has been indicted by the International Criminal Court (ICC), has thrust to the fore a conundrum that has bedeviled the movement for international justice since its inception: how to render impartial justice for grave crimes in a world of unequal power?

In recent months, I have been privileged to take part in passionate discussions on the ICC in Johannesburg, Rio de Janeiro, and Jerusalem. Many rights activists who supported the establishment of the ICC are troubled by the many who evade its grasp. Or, as more than one person put it bluntly: “Why has the ICC charged Bashir and other African leaders, but not senior figures from the global north, such as [former U.S. President George W.] Bush and [former British Prime Minister Tony] Blair,” for crimes which occurred in prosecuting the war in Iraq and the “global war on terror”?

While this question may sound outlandish in Washington or London, it is considered common sense in many other capitals. 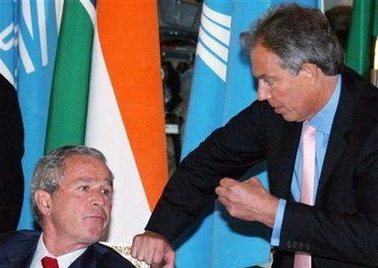 "Why has the ICC charged Bashir and other African leaders, but not senior figures from the global north for crimes which occurred in prosecuting the war in Iraq and the 'global war on terror'?"

There is, of course, a “legal” response to the Bush/Blair argument. The United States has not joined the ICC. So, absent a referral by the UN Security Council, where the US has a veto, its officials are not subject to the Court’s jurisdiction. And the Court is in fact examining allegations that British troops in Iraq were involved in 60 cases of unlawful killing, and mistreatment of more than 170 detainees.

But these responses, while technically accurate, don’t explain satisfactorily why the system of international justice now on offer is so unfairly selective in targeting some but not others who are (at least arguably) similarly culpable. Nor are they sufficient even on their own terms. The United States is legally and morally obliged to prosecute all those, including Bush administration officials, responsible for crimes of torture and forced disappearance. To date, it has abjectly failed to do so.

It would be a gross disservice to suggest that there may be no justice for anyone until there is justice for all. But the truth is that the implicit critique of hypocrisy weakens the fight against impunity for grave crimes. We must pay it heed, or the important gains of the past quarter century might be diminished.

Advocates for justice must do more to move the current, politically fixed, jurisdictional boundaries that constrain the ICC. It is not enough to recall that most of the ICC’s current investigations are in Africa because African states themselves invited these investigations or because the Security Council asked the Court to intervene.  Absent more vigorous efforts to extend the Court’s reach, the mantra that “the Court simply follows the law and the evidence” will begin to ring hollow.

Civil society should push the ICC to help itself by thoroughly exploring all legal avenues to investigation in situations already within its remit—such as Afghanistan, Georgia and Ukraine—where the forces of a major world power (the US or Russia) are potentially implicated. And Americans in particular can remind Washington that, even though it is not an ICC member, it can play a constructive role in several ways.

First, the ICC is now examining the situation in Israel and Palestine. Israel has de facto power to deny the Court’s investigators entry into Palestine.  Washington should urge both Israel and the Palestinian authorities, just as it has previously told Kenya and other African governments, to cooperate with the Court and facilitate its inquiry of all parties. It is not inconceivable for both sides to see an ICC investigation as in their own interest.

Second, as a permanent member of the Security Council, the US, like China and Russia, is in the morally untenable position of shaping the ICC’s docket even as it refuses to subject American citizens to its jurisdiction. The US won’t be joining the Court in the near term. Nor, despite growing demands, will Security Council reform happen soon. But a significant interim step would be for the US to endorse France’s recent proposal for all permanent Security Council members to abstain from use of the veto in cases of mass atrocities.

Perhaps most importantly, the US must show that it is willing not just to tell others to enforce the law, but to do so itself.

Another difficult but not impossible goal would be for the US to help persuade the Council to revisit Syria and North Korea.  At a minimum, the State Department could support a request by the UN General Assembly, where the P5 states lack a veto, for the other Hague-based tribunal – the International Court of Justice – to consider what breaches of international humanitarian law have been committed in both places and which states and non-state actors are responsible.

In recognition of the reality that the ICC can address only a fraction of the most serious crimes, the US should bolster national efforts, and courageous national judges and prosecutors seeking to bring perpetrators to trial. In the past year, Washington has helpfully backed accountability initiatives in Guatemala, the Central African Republic and South Sudan. But it can and should do more.

Perhaps most importantly, the US must show that it is willing not just to tell others to enforce the law, but to do so itself. Two actions would have particular resonance in restoring US legitimacy around the world. First, prosecute those government officials responsible for authorizing, and carrying out, torture and forced disappearance since 9/11. Second, craft and apply a policy on lethal drone strikes which openly acknowledges, and provides compensation for, civilian casualties.

The past two decades witnessed the creation of an institutional architecture of international justice resting of necessity within an unequal political framework. As former ICC President Song famously declared, the Court is “a judicial institution operating in a political world.”

But as the inconsistencies between unbalanced political power and a level judicial playing field grow more glaring, the mission of the ICC, and the cause of justice it symbolizes, have come under threat. The same intensity of purpose among civil society that led to the creation of the ICC is being turned toward the inequities that frustrate its operation. “It’s no longer possible to rest on our achievements,” one South African activist told me this summer; “we must demonstrate to the masses that the law can work for them, and not just for the powerful.”