The election of Donald Trump is the latest in a string of triumphs for illiberal nationalism, all of which squarely challenge the notion that governments must respect universal human rights.

It is rare, if not unprecedented, for so many leading figures in political democracies—from India to Britain, Hungary to France, the Philippines to the United States—to have so directly disparaged principles of open government, peaceful dissent, freedom from torture, and non-discrimination.

As angry rhetoric soars, the temptation is either to lay low or to lash back in equal fury. But the present moment calls less for sudden shifts in direction than clear thinking. Advocates must examine soberly what has happened and why, as we chart a strategy to revitalize the rights cause for a new era. 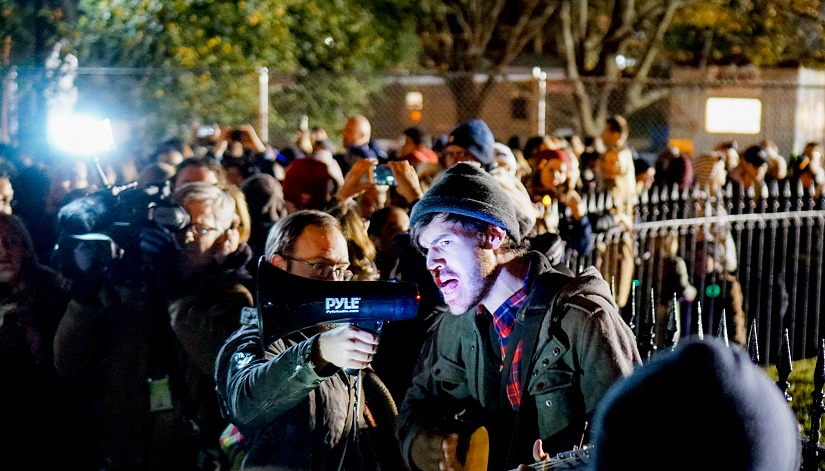 An anti-Trump protest in Washington D.C. As angry nationalist rhetoric soars, the temptation is either to lay low or to lash back in equal fury.

For some critics on the left, the rights project suffers from association with the prevailing, top-down version of globalization—of unfettered markets, little regulation and low taxation—that has brought patterns of widening inequality to many societies. For others on the right, human rights are part of an international system that is seen to override national prerogatives, ignore national culture and demean national pride—or, as the Trump campaign has said, which “puts allegiance to international institutions ahead of the nation-state”.

Common to both lines of critique is a caricature of a movement that is elitist and out of touch with ordinary concerns. Yet this vision has gained political traction in part because it contains a glimmer of truth.

Many institutionalized efforts to advance rights—for example, NGOs with professionally trained staff and boards—depend for financial support on a small coterie of private foundations and/or individuals, overwhelmingly located in the United States, and to a lesser extent, in Europe. However well intended, these donors are the global elite; they have been spared the economic hardship others suffer. Compounding the sense of disproportion, the bulk of rights funding still goes to groups located in the global North, notwithstanding more recent efforts to change. And much of it favors issues (such as international criminal justice, LGBTI rights or internet freedom) which, however important, are not the priorities of all. Many view it as no coincidence that the most visible sites of the global rights architecture—the United Nations human rights regime, the International Criminal Court—are located in wealthy northern capitals like Geneva, The Hague and New York. Repeated assertions of US exceptionalism have not helped.

All this has fed narratives setting “human rights” in false opposition to the interests of ordinary people.

Former Home (now Prime) Minister May has called for Britain to leave the European Convention on Human Rights, which, she has complained, “bind[s] the hands of parliament, adds nothing to our prosperity, [and] makes us less secure.” Philippines President Duterte couldn’t “give a shit” about human rights because, he explained, he has a duty to protect children from drug dealers. In the same vein, US President-elect Trump has consistently dismissed as essentially “none of our business” reports of abuses in Russia, Syria, Turkey and other countries, because “we don’t know what we are doing and we can’t see straight in our own country.”

All this has fed narratives setting “human rights” in false opposition to the interests of ordinary people.The reality, of course, is that in most countries, most advocates of human rights are not well-paid professionals; they are common citizens and non-citizens, members of communities, victims of abuse and their loved ones—anything but elite and out of touch.

So how should rights practitioners respond to the new reality?

First, do what they do best—confront human rights violations when they happen. In the wake of Brexit and the US election, hate crimes are on the rise. Activists must deploy their core skills to document, publicize and pursue accountability. By shining a spotlight on abuses, exposing injustice and using the media and the courts, civil society groups in the US and other countries constrained some of the worst excesses of the Bush Administration’s war on terror. Worse may be soon to come, and rights actors will be sorely needed.

But that’s not enough. Advocates must intensify efforts to address the profound economic dislocations that have inspired so many political earthquakes. Numerous instances of deprivation—having to forego medical care for a serious illness for want of insurance; losing a job and having no safety net to fall back upon; being condemned to inferior quality primary schooling due to inadequate state funding—raise profound questions about social obligation, and demand public action, whether the interest at issue is framed as a “right” or not.

Fortunately, they need not start from scratch. South Africa’s courts are hardly alone in recognizing the justiciable nature of certain “progressively realizable” economic and social rights, whether in the area of housing, health or social security. In recent years, US state courts have found that the government has a constitutional duty to fund education at minimally adequate levels. More should be done to fortify the doctrinal foundations undergirding affirmative efforts to safeguard economic and social welfare.

Beyond the letter of the law, the human rights community must expand the toolbox of rights advocacy to encompass practical, grassroots engagement through legal empowerment of the many. In recent years, civil society from Albania to Uganda has partnered with business, government and international bodies to improve access to health, water, and land by fostering more active community involvement, enhancing basic legal knowledge, securing legal identity, enabling women and girls, and training paralegals. These initiatives, which merit increased public and private support, are an increasingly critical part of the 21st century movement for human rights.

Finally, we must reject the often-cited, much-exaggerated dichotomy between domestic and international rights law as an unnecessary diversion. To be sure, international laws and institutions are the creations of states, but they are far away, and they often carry less authority than equivalent bodies closer to home. They are intended not as an alternative, but rather to backstop failing national systems. In most cases, implementation of international standards requires local action.

More to the point, from the perspective of most people seeking recognition or vindication of one right or another, it matters far less who provides it than that it is done at all. Their claims for help rarely distinguish among municipal authorities, national government and international institutions. And if their language varies from place to place, they share a common aim—to be treated with dignity by virtue of their humanity. Such an aspiration could not be more authentic. Maybe it’s enough to make the movement for human rights great—again.