Will Trump’s unequivocal position on torture affect how the US responds to future terrorist attacks?

During his presidential campaign, President Donald Trump advocated for a resumption of President George W. Bush’s (now defunct) “enhanced interrogation” program to collect intelligence and to counter terrorism. He did not mince words at a November 2015 campaign rally in Ohio: “Would I approve of waterboarding? You bet your ass I would—in a heartbeat.” In January 2017, the New York Times and the Washington Post released a draft executive order (EO) requesting that national security officials “recommend to the president whether to reinitiate a program of interrogation of high-value alien terrorists to be operated outside the United States.”

President Trump’s numerous claims that “torture works” have been undermined by policymakers, psychologists, political scientists, and even his own Secretary of Defense, General James Mattis. Both General Mattis and the Director of the Central Intelligence Agency (CIA), Mike Pompeo, are on record questioning the efficacy of torture as a tool of intelligence gathering. Following the release of President Trump’s draft EO, Senator John McCain issued a statement reminding the American public that torture cannot be implemented legally without Congressional consent: “The President can sign whatever executive orders he likes. But the law is the law. We are not bringing back torture in the United States of America.”

If there is good evidence that torture is ineffective in generating useful intelligence about terrorist organizations, why do governments—like the United States after the 9/11 attacks—respond to terrorist attacks with more torture?

There is surprisingly little evidence that governments regularly respond to terrorism with torture.

There is surprisingly little evidence that governments regularly respond to terrorism with torture. David Charters and colleagues found that democracies facing threats of terrorism in the 1970s and 1980s were able to craft effective counterterrorism policies without resorting to torture. A more recent study by James Walsh and James Piazza finds that governments react to terrorism by engaging in more physical integrity violations, such as extrajudicial killings and disappearances, but do not engage in heightened levels of torture, specifically. 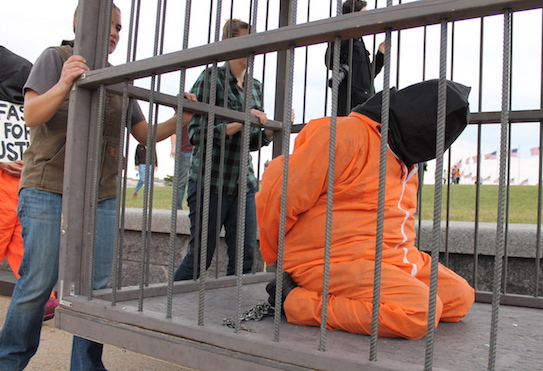 A protester participating in the Witness Against Torture / Shut Down Guantanamo Bay Silent March in Washington DC, 7 January 2012.

Because an important objective of the military is to defend against external enemies, we argue that military forces respond to transnational terrorist attacks—but not domestic terrorist incidents—with heightened torture. Militaries have historically devoted most of their attention to planning for war, not counterterrorism. Torture is a practice that they can implement quickly and (seemingly) cheaply to gain intelligence about terrorist threats, making it a tempting solution to a novel policy challenge.

Police and prison officials, in contrast, are less likely to view responding to transnational threats as central to their organizational missions, and thus do not respond by increasing the degree to which they torture following a terrorist attack.

We assessed this argument with data from the Ill-Treatment and Torture Data Collection Project, which disaggregates the agencies engaging in torture for countries around the world from 1995 through 2005. The figure below illustrates this relationship by depicting the predicted probability that a country’s military will engage in greater degrees of torture as transnational terror increases.

The figure shows that the likelihood of widespread, systemic torture by military forces increases sharply with the number of transnational terrorist attacks, while the probability that the military will refrain from engaging in torture declines.

But the value of torture for democratic states increases during periods of foreign threat, including threats posed by transnational terrorists. Democracies have long responded to external threats by increasing repression at home. Citizens are less likely to object to the torture of suspected terrorists who are members of “out-groups”, including foreign nationals, and their preferences carry greater weight in democratic regimes.

Our findings suggest at least two reforms that could be put in place to prevent a repeat of the post 9/11 experience of torture by American military and intelligence agencies. The first is more effective oversight of these agencies, including in long-standing democracies such as the United States. As Michael Colaresi and others have suggested, requiring military and intelligence agencies to explain and justify their treatment of detainees to legislative or judicial bodies might restrain the resort to measures (such as torture) that promise quick intelligence returns but threaten to undermine the legitimacy of counterterrorism policies—and might actually lead to more terrorism.

A second useful response would be to consider now how the United States can best respond to catastrophic terrorist attacks in the future. The Senate report on the CIA’s enhanced interrogation program suggests that the torture and detention policies of the agency (and likely of the military) were devised hastily and in secret. Coolly debating the range and value of responses to terrorism before the next attack might ensure that more effective and ethical policies can be put in place should the United States homeland be targeted by transnational terrorists in the future.

This last point is a pressing one. How would the Trump administration respond if transnational terrorists launch a major attack on American territory? As a newly-inaugurated President with little traditional political experience, President Trump may not seek a wide range of advice about the most effective counter-terrorism policies, and could prefer responses that seem to offer clear-cut solutions—and his comments in support of waterboarding suggest he views the practice as quite effective. Thinking through these issues now could lead to more effective and just responses in the event of such an attack.

***A version of this article was previously published in the Monkey Cage, a section of the Washington Post, on January 13, 2015.

Courtenay R. Conrad is an associate professor of political science at the University of California, Merced.

Justin Conrad is an associate professor of political science in the Department of Political Science and Public Administration at the University of North Carolina at Charlotte.

James A. Piazza is a liberal arts research professor of Political Science at Pennsylvania State University.

James Igoe Walsh is a professor of political science in the Department of Political Science and Public Administration at the University of North Carolina at Charlotte.

Might Trump lead US activists to rediscover international human rights?