Erdoğan will likely succeed in removing the only genuine political opposition in the Turkish Parliament. And it will all, technically, be legal if the ECtHR does not step in. 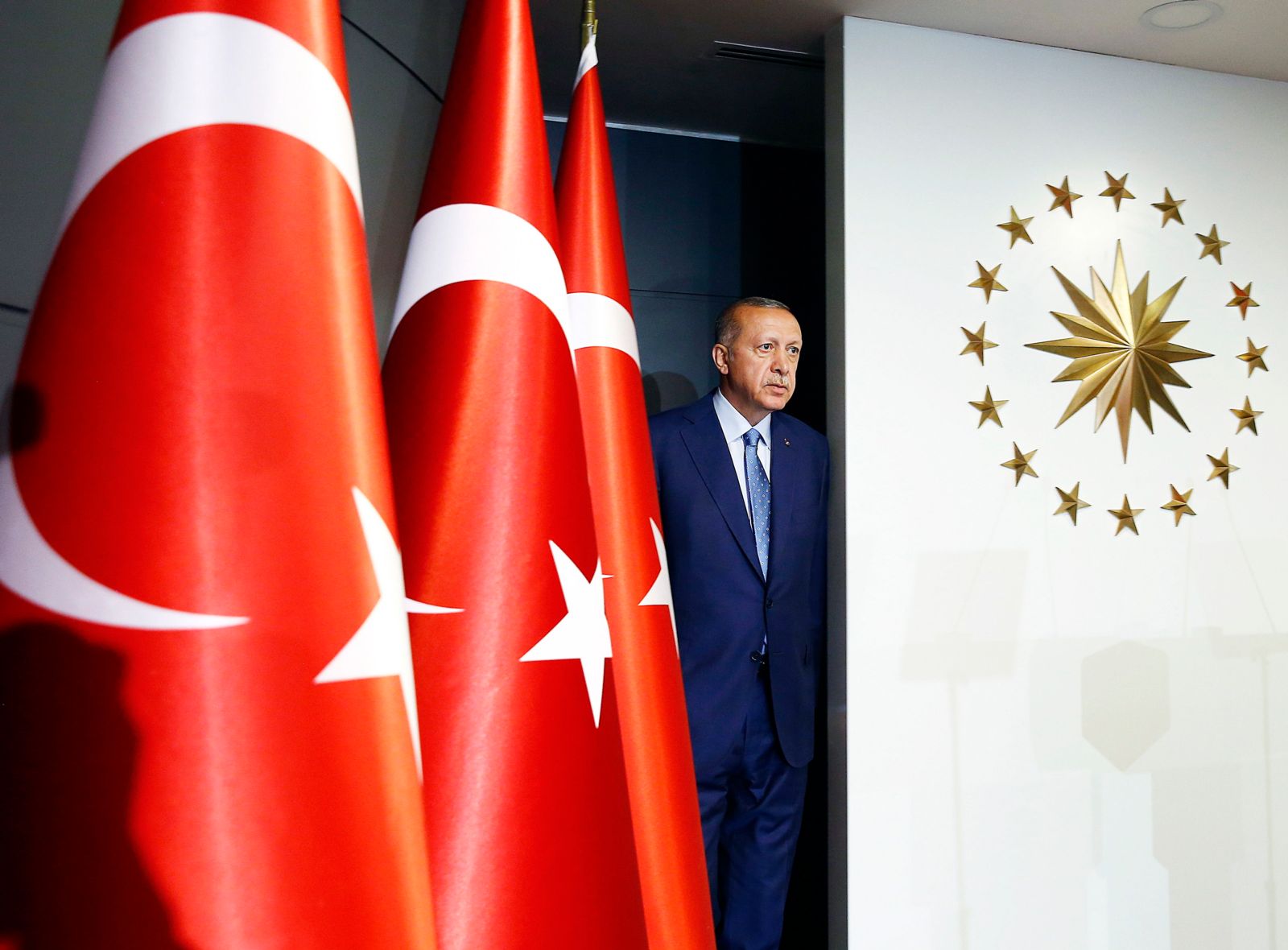 Turkish President Recep Tayyip Erdogan attends a press conference at his palace after closing voting for the Turkish presidential and parliamentary elections in Istanbul, Turkey, 24 June 2018.

On 24 June, Turkey held arguably the most important elections of its modern history. This vote replaced its current parliamentary system with a presidential one where the president is vested with sweeping executive powers. What also makes these elections historic is the fact that, among the six candidates running for the presidential office is Selahattin Demirtaş, a Kurdish politician running his campaign from a cell in a high security prison.

Demirtaş is among a dozen Kurdish politicians who have been held in pre-trial detention across the country since November 2016. These detainees are elected members of the parliament of the pro-Kurdish Peoples’ Democratic Party (Halkların Demokratik Partisi-HDP).

The significance of this case for democracy in Turkey can hardly be overstated. HDP is the third largest party in the Turkish Parliament, but the HDP parliamentarians’ arrests were made legal by special legislation introducing a one-time exception to the constitutional parliamentary immunity regime. This case is a textbook example of an authoritarian regime’s abuse of the “law”, which the Council of Europe’s own Venice Commission found to be a “misuse of the constitutional amendment procedure”.

Expecting a similar conclusion from the Council of Europe’s highest judicial body, the HDP deputies petitioned the European Court of Human Rights (ECtHR) in early 2017 to contest the legality of their initial arrests and of their prolonged pre-trial detention. Yet, despite having decided to examine this case as a matter of priority, the ECtHR has yet to speak out 17 months after the filing of the first petitions—a silence that can only be recognized as complicity.

For close observers of Strasbourg, this silence might be perplexing. After all, the ECtHR built a sizeable body of law based on Turkey’s decades-long Kurdish conflict regarding political party dissolutions, unlawful and prolonged pre-trial detentions, and the criminalization of non-violent political speech. For example, the ECtHR found the prosecution and conviction of another set of Kurdish parliamentarians in 1994 to have violated their right to fair trial. It also held that the dissolution of their Democracy Party (Demokrasi Partisi-DEP), one of the HDP’s many predecessors, infringed on the right to freedom of association. However, a closer reading of the ECtHR’s jurisprudence reveals that the Court has consistently failed to adopt a contextualized and historically grounded approach to both Turkey’s legal regime and its restrictions of Kurdish political rights. Rather than being an aberration in a democratic regime, Turkey’s repression of the Kurds is a systematic policy by an authoritarian state.

Historically, the Turkish state has resorted to overlapping legal strategies to preclude the political representation of the Kurds. While a 10% electoral threshold successfully excluded Kurdish parties from the Parliament until 2015, it is only one of many ways that law itself has restrained justice. Other examples include the conviction of Kurdish political dissidents and the dismissal of elected Kurdish mayors of their posts. These actions were taken under Turkey’s draconian counter-terrorism and penal laws for the Kurds’ non-violent advocacy of their political and cultural rights. The Kurds contested each of these policies in Strasbourg.

Although the ECtHR’s precedent-setting judgments upholding Kurdish political parties’ right to exist have been widely acclaimed in scholarship, the ways in which the ECtHR has avoided to address the Kurds’ group rights claims have largely escaped attention. One such overlooked ruling concerns the electoral threshold. The case was brought by two Kurdish politicians who ran in the 2002 parliamentary elections from the Democratic People’s Party (Demokratik Halk Partisi-DEHAP), yet another pro-Kurdish party dissolved by the Turkish state soon after it was established. While the applicants received 46.9% of the votes in the Kurdish province of Şırnak, DEHAP’s nationwide votes (6.2%) were not sufficient to pass the national 10% threshold. As a result, the three parliamentary seats allocated to Şırnak were distributed amongst the candidates of the Justice and Development Party (Adalet ve Kalkınma Partisi-AKP), and an independent candidate, to whom the threshold did not apply. Therefore, in the end, although having received nearly half the votes in the province, the DEHAP did not occupy any of the parliamentary seats allocated to Şırnak.

In an astounding 2008 ruling, while the ECtHR found the 10% threshold in general to be “excessive”, it concluded that this still did not interfere with the free expression of the opinion of the people in the choice of the legislature, as protected in the European Convention on Human Rights. Instead of adopting a historically grounded approach and identifying Turkey’s threshold as yet another item in the legal repertoire of an authoritarian state, the ECtHR treated it as a democratic nation’s decision over its electoral system. More importantly, the ECtHR failed to adopt a much-needed differentiated review of democratic and authoritarian regimes.

By the time the criminal process is concluded, Erdoğan will likely succeed in removing the only genuine political opposition in the Parliament. And it will all, technically, be legal".

In 2015, to everyone’s surprise, the HDP passed the 10% threshold in general elections—a first for any Kurdish party. But the HDP’s entry to the Parliament jeopardized Erdoğan’s plans to consolidate his autocratic rule. Having been defeated politically, Erdoğan resorted to “law” to eradicate the HDP from the Parliament: 55 out of 59 HDP parliamentarians were stripped of their immunities, enabling their prosecution on terrorism charges. This removal of immunity led to a dozen leaders placed in pre-trial detention, where they remain to this day.

While the ECtHR has been taking its time to review the HDP deputies’ petitions, the Turkish judiciary has been working at rapid speed, concluding the trials of parliamentarians with convictions and convicts cannot hold office in Turkey. Once again, law operates as a legal reversal of justice. As of now, twelve (20%) HDP deputies have already been stripped of their seats. By the time the criminal process is concluded, Erdoğan will likely succeed in removing the only genuine political opposition in the Parliament. And it will all, technically, be legal.

Ultimately, there is more to the HDP deputies’ pending case than meets the eye. The case raises important questions on the relationship between human rights and democracy in the ECtHR system. The interdependence of the two is not only explicitly stated in the ECHR’s preamble but also reaffirmed in the “Democratic Necessity Principle” throughout. Accordingly, human rights are best maintained by “an effective political democracy” and can be restricted only to the extent it is necessary for the preservation of democracy.

It is easy to blame authoritarianism on Erdoğan but the ECtHR’s responsibility in this outcome also needs to be questioned. The ECtHR has too long failed to differentiate between democratic and authoritarian regimes. Turkey has always been the latter, and it is high time that Strasbourg treat it as such.

Dilek Kurban is a fellow and lecturer at the Hertie School of Governance. Her research interests include the European Court of Human Rights, legal mobilization, authoritarian rule of law and state violence in politico-ethnic conflicts, with a specialization in Turkey.