The international human rights regime is too expansive in scope and feeble in enforcement to have any real impact; good government can’t be reduced to a set of rules or rights.

A massive international legal effort to force countries to protect human rights has failed. It is time to think of new ways of advancing the well being of people around the world.

The international human rights project goes back more than half a century. It began with the Universal Declaration of Human Rights, a vague and aspirational document, and then incorporated itself in a series of formal treaties. These treaties—about a dozen in total—set out an extraordinary array of rights. Not just classical civil and political rights—rights to freedom of expression and religious worship, to a trial before an independent judge, to protection against unreasonable searches, not to be tortured, and not to be discriminated against on the basis of race, sex, or ethnicity. The treaties also guarantee rights to work, pensions, education, housing, and medical care. They protect the right of children to have access to the media and require accommodation for disabled people. The vast majority of countries have ratified nearly all these treaties, and also set up numerous international courts, commissions, councils, and committees to monitor the compliance of states.

For a long time, optimism that these treaties could improve the lives of people coexisted with cynicism about the willingness of countries to comply with them. In recent years, political scientists have looked at the data. They have found little evidence that countries that ratify human rights treaties improve their human rights performance. 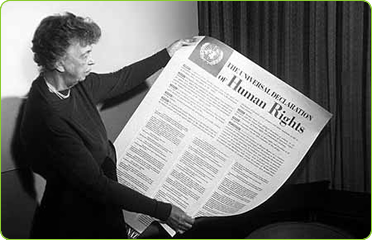 The international human rights project goes back more than half a century. It began with the Universal Declaration of Human Rights, a vague and aspirational document.

The cynical story may contain some truth but it doesn’t seem right. Many countries do respect some human rights, and they often make sincere, if limited efforts, to improve rights elsewhere. They may use economic or diplomatic pressure; they occasionally launch a military strike for humanitarian purposes. Even human rights-violating countries don’t admit that they violate human rights, and sometimes go to great lengths to conceal their violations, implying that they fear negative world opinion if the violations are publicized.

No country, and particularly no poor country, could really respect all of the rights in their entirety even if they wanted to.

The real problem with the human rights regime lies elsewhere. If you sit down and read through the treaties, one thing that will quickly dawn on you is that there are an awful lot of rights. As many as 400, according to my count; and they are often quite vague, encompassing a wide range of human interests. Many of the rights permit tradeoffs—for example, the right to freedom of expression can be restricted in the interests of public morality and social order. No country, and particularly no poor country, could really respect all of the rights in their entirety even if they wanted to. Vindicating rights to food, jobs, health care, education, due process, political freedom, and all the rest are—above all—expensive. In the west, significant resources are devoted to these goods, and this is politically possible only because people are wealthy enough to be willing to pay the taxes for them, and political and legal institutions are robust and honest enough to deliver them.

The original idea of human rights law was to identify a small number of the strongest human interests, disregard of which would justify foreign pressure in violation of traditional notions of sovereignty. But it turned out to be hard for countries to agree on what those interests should be. Political freedom? Protection of the body? Privacy? Employment and health care? In reality, governments must use limited resources to deliver these goods. When they are politically unpopular (for example, religious freedom in Saudi Arabia), there is just no way for the government to deliver them. When they are expensive (for example, investigating allegations of torture, and training local police not to engage in torture), it may be impossible to justify using resources that could do more for people if spent on education, medical care, and security.

The human rights treaty regime was a naïve effort to dictate the rules of good government for all countries, everywhere. Good government cannot be reduced to a set of rules or rights. Thus, except in unusual circumstances, it is very hard for outsiders (typically, westerners) to justifiably criticize the tradeoffs made in (usually) poor countries that favor some human interests more than others.

If human rights law cannot provide guidance, can anything be done to help people in foreign countries? Western countries already take seriously—though not seriously enough—their obligation to provide foreign aid to poor countries. Foreign aid does not always work—and it almost never makes a big difference—but incremental improvements are often all that can be expected. In the last ten years, economists and other experts have advocated carefully controlled experiments, in which foreign aid of various types is distributed under carefully monitored conditions. Observers can then determine whether it helps, hurts, or makes no difference. The contrast between this approach and the human rights approach could not be greater. Where the new foreign aid approach stresses mutual consent, empiricism, and humility, the human rights approach was top-down, high-handed, utopian, and coercive.

There are other ways of helping poor people in foreign countries. Probably the most effective way is opening our borders to migration. Foreign migrant workers can earn five or ten times what they make in their home countries; they also send much of their earnings back as remittances, which form a substantial percentage of GDP in the poorest countries. Human rights advocates often pressure countries with guest worker systems to grant guest workers the full panoply of rights. But if governments are obligated to give generous rights to migrant workers, they will often choose to keep them out, harming them and their families. In this as in so many cases, the rigid utopianism of human rights is at war with simple, politically feasible means for helping the worst off. As Shakespeare put it, “striving to better, oft we mar what’s well.”