Using the Sustainable Development Goals as a weapon against populism

The Sustainable Development Goals could give activists the rhetoric they need to hold the Trump administration accountable.

As much as it might shock the Republicans calling for the United States to withdraw from UN commitments, much of Trump’s populist rhetoric is in fact mirrored in the UN Sustainable Development Goals (SDGs)—though not in the way you might think. As the history of human rights activists outside of the US shows, relying on international commitments as a means to lobby politicians and persuade the public is a smart strategy. Goal 16 in particular is about promoting just, peaceful, and inclusive societies, making it a natural rhetorical launching pad for critiques of the current administration. Goal 16’s focus on inverting populist ideas and its focus on measured outcomes offers a valuable tool for activists determined to push back against an administration focused on unraveling a liberal international order.

Inclusion is a key theme, as is political reform to create a more effective government.

This specific goal matters because it appropriates rhetoric now thought of as populist. Inclusion is a key theme, as is political reform to create a more effective government. Both of these are elements in the Trump campaign. His references to “returning power to the people,” “draining the swamp,” and empowering “the forgotten people” are echoed in the targets of Goal 16, albeit from a very different partisan standpoint. Four of the targets in Goal 16 have clear parallels to Trump’s rhetoric: Target 16.3 is about promoting rule of law and equal access to justice; Target 16.5 aims to reduce corruption and bribery; Target 16.6 is about developing effective, accountable, and transparent institutions, and Target 16.7 aims to ensure responsive, inclusive, participatory and representative decision-making. Each of these targets reflect the rhetoric of the new White House, and this is precisely why they are valuable for activists. They are a means to demonstrate that this presidency is not keeping its promises. US shortcomings in achieving these goals become failings of this president, and calling attention to these shortcomings can only help to turn the tide of public opinion against him. 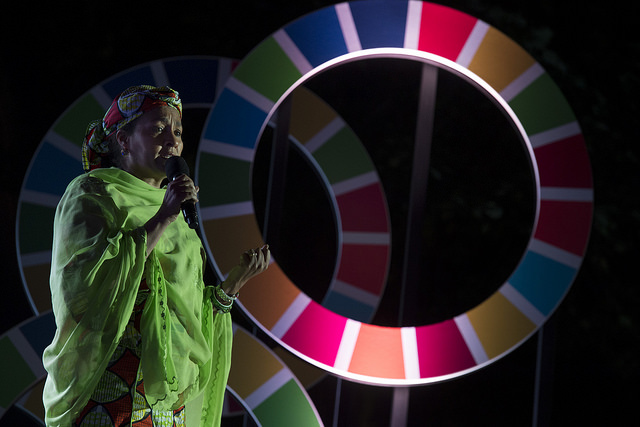 How can these goals make a difference? Three key facts about the SDGs (and specifically SDG 16) make them useful tools for human rights advocates to use in policy debates. First, the goals were formed as a result of an inclusive process which brought together states, civil society organizations, and the public through an innovative survey which had millions of responses. Because this process of building the goals was an inclusive one, the goals reconnect the US to the rest of the world in ways that depart from President Trump’s rhetoric. It is difficult to promote the seeming unilateralism of “America First” when the US helped to craft these goals in ways that reflect liberal internationalist values. Invoking the goals, then, as American priorities helps reconnect the US to the rest of the world.

What gives the Sustainable Development Goals added weight is that they are not merely ideas. They are backed by measurable indicators, which is essential for civil society to benchmark the US relative to other countries. Over the next two years, the data indicators for the goals will be refined and put into the field, allowing us to assess relations between victims and law enforcement, the extensiveness of corruption, and the views of the public on the quality of public services. Given the amount of attention that comparisons of test scores of American students to those of other countries receive, similar comparisons based on indicators from Goal 16 will surely find their way into the national media, and this can only strengthen the hand of activists vis-à-vis the White House.

One final reason why the Sustainable Development Goals have value for human rights activists is that they have broad public support. A national survey of 800 registered voters conducted in 2015 found that while awareness of the Goals was low, almost seven in ten voters or 69% have a favorable opinion of the Goals when described to them. More importantly, 83% of voters believe the United States should be “very” or “somewhat” involved in a worldwide effort to accomplish these goals by 2030. Rather than being framed as a project written by outsiders, the American public recognizes a natural coincidence between their own policy priorities and those of the UN. Building greater awareness of the Goals, then, can only strengthen the hand of advocates determined to push back against the current administration.

It is no accident that Congressional and White House critiques of the UN claim that it is a powerless organization antithetical to US interests. This is merely intended to disguise the fact that Goal 16 both reflects American values and is a challenge to the Trump White House. As many activists are looking to international law to strengthen their influence, they should be aware that the Sustainable Development Goals are also a powerful tool in their arsenal.

Martin S. Edwards is an Associate Professor in the School of Diplomacy and International Relations at Seton Hall University.

Lis Kabashi is currently a graduate student and a research assistant in the School of Diplomacy and International Relations at Seton Hall University. He previously served as an intern at the Ministry of European Integration, Republic of Kosovo.