It’s time for leaders in the Mexican Catholic Church to speak up where they are most needed.

Catholicism in Mexico has reached a flashpoint of contradiction when it comes to human rights. On the one hand, highly conservative religious leaders have aligned with powerful and economic elites, creating an authoritative force that is not amenable to certain types of human rights. On the other hand, progressive Catholics are the most active presence among Mexican NGOs working in the name of rights. In addition, the Catholic leadership has used the “right to life” to argue fiercely against sexual education and certain women’s rights, and yet stays silent on many other “right to life” issues like extrajudicial killings and disappearances. So why are we seeing these stark contrasts within the same religion?

First, as many other discussions of religion and human rights have pointed out, the rigidity and vertical hierarchy of religious conservatives are often reflections of individual power, values and interpretations, rather than of the doctrine itself. Human rights encourage political action based on the rights and freedoms of citizens, not from obligations imposed by institutions and normative frameworks. Human rights advocacy, then, resides in the basic interest of civilians' ability to stand up to authorities’ abuse of power, and this presents an obvious problem for those in power. The structure and teachings of Catholicism are actually strongly in favour of human rights (e.g., preserving the value of human life and dignity), yet enacting these rights may threaten the religion’s own power structure.

The structure and teachings of Catholicism are actually strongly in favour of human rights, yet enacting these rights may threaten the religion’s own power structure.

In fact, religions can provide doctrines, theology and pastoral models that may break free and even criticize their own organizations—and this is where we are seeing the conflict among many Mexican Catholics and their leadership. These “pastoral agents” of change are usually not part of the primary power centre of Catholicism, despite the fact that some bishops have taken up a strong defence of human rights.

In Mexico, the Dominicans and Jesuits in particular propelled the first advocacy centres. In the 1990s, both bishops and Catholic-inspired lay organizations had relevant and decisive roles in the country’s democratic transition, championing political rights and dethroning the dictatorship of the state party. Yet, these actions provoked conflict because of the intrusion of the church into the political workings of the country. Some segments of Catholicism backed off, while others have not, creating tension within various Catholic groups.

While the human rights discourse provides a framework of values that transcends and permeates different religions, in Mexico the discourse has almost become cliché in that any religious leader has to say he is a defender of human rights, regardless of actual practice. As Barbara Frey points out, it has become popular in Mexico to talk about human rights, but actually protecting and enforcing them is another story. And Catholicism (at least in its conservative, hierarchical form) is a large part of this doublespeak problem. What we end up with is a human rights discourse that has morphed into rhetorical territory where everyone seems to be converging. And this convergence should be a good thing for rights. Except that in practice human rights have become an area of conflict between various different ideological standpoints, creating tension rather than cooperation (e.g., liberals versus socialists, conservatives versus progressives, revolutionaries and reformers, democrats and anarchists, etc.).

Where this tension is particularly high is around the issue of the “right to life”. Since the conservative papacy of John Paul II, the Catholic leadership has had an absolutist motto of defence for life from birth to death. In the name of this stance, there have been “crusades” against freedom for lay people, such as rallying against public health campaigns that intend to reduce epidemics and deaths—like decriminalizing abortion, reducing the spread of HIV/AIDS, and making contraceptives such as the “morning after” pill more widely available—and also against sex education and homosexual marriage. These causes became a national campaign, and in 2010 “Mexicans for Life for All” was formed as an umbrella coalition of 204 right-wing groups, mega-entrepreneurs and elites. The right to life discourse became so radicalized that the Archdiocese of Guadalajara declared that feminism, along with the idea of gender and homosexuality were, “aberrations that destroy the basic fabric of society.” 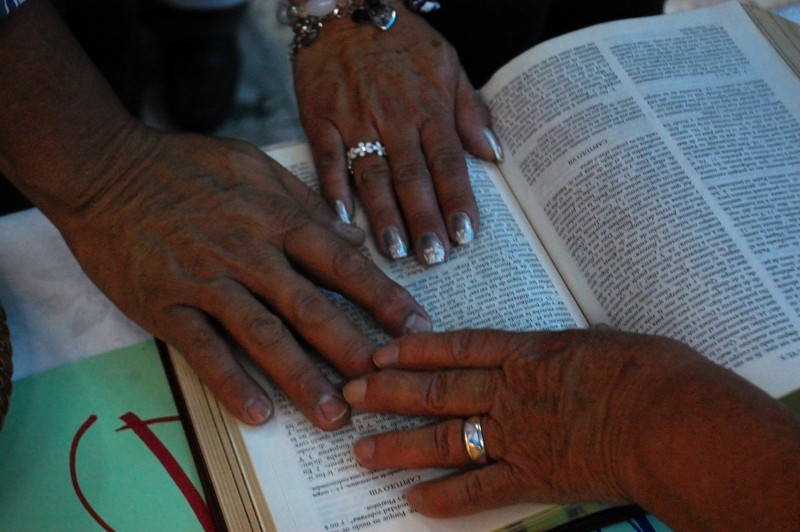 Catholics observe Ash Wednesday in Mexico City. Instead of vaguely worded statements, what the Mexican people really need are priests to fight for the right to life of common nameless citizens.

But what is perhaps more worrisome is that the Catholic argument in favour of life often remains hidden when the Mexican people need it most. There has been a systematic silence from the Catholic leadership regarding the politics of death and genocide now common in Mexico. Similarly, the church leadership has failed to speak out against female genocide, most frequently occurring in Juarez, or against government impunity in regards to killings, torture and disappearances.

And yet, despite this silence, there are many NGOs supported by the Catholic Church that specifically denounce organized crime and impunity, and in 2006 the Mexican Church formed the outreach Human Mobility to promote and defend human rights (documenting abuses and disappearances, and giving legal aid). One exemplary case is that of the priest Alejandro Solalinde Guerra, coordinator of Human Mobility in the Southern-Pacific zone. Besides providing a hostel that offers shelter, meals and protection for migrants, he also offers protection for Central Americans facing organized crime, police forces and abuse by immigration agents. Another case is that of the Catholic poet Javier Sicilia, who led “the comfort caravan” for victims of drug-trafficking wars during the Calderon administration.

The newly nominated Pope Francisco recently wrote a letter in which he acknowledged the abuses that migrants face and criticized the decline in public institutions, while noting that the work of the Church is getting more difficult. However, the Mexican Catholic Diocese has acted very cautiously and has not shown solidarity with citizens who are calling for “not one more death.” Catholic leaders stayed silent even when hundreds of thousands of Mexicans took to the streets with the slogan “they were taken alive, return them alive”, referring to the student disappearances in Iguala, Guerrero. The first signal of solidarity was given by the Cardinal Juan Sandovalof Guadalajara this past October during the pilgrimage of the Virgin of Zapopan, known as the “Pacifier”. He proclaimed, “Today we need pacification, [we have] a convulsed and intimidated society menaced by organized crime. Today we need consistency among so much corruption, we need fraternal love that allows us Christ in the face of so much inequality.”

But instead of vaguely worded statements, what the Mexican people really need are priests to fight for the right to life of common nameless citizens. The right to life is not a slogan, but a daily struggle for survival and the most elementary justice. As it stands, Catholics find themselves divided: some are heading up the citizen advocacy demanding a fair and just Mexico, while others—such as “Mexicans for Life” and most of the elite clergy—have maintained a sepulchral silence.