International humanitarian law is not a diplomatic conversation devoid of real world implications, and ignoring it creates a free-for-all.

As the United States moves closer to electing its next president, and the events of Paris and Brussels remind us of the horrors inflicted by those determined to terrorize populations, it is important that we take a breath. We must remember that hawkish sound bites about being tough on terrorism don’t solve the problem of terrorism. They also don’t free us from our responsibility to live and fight by the international standards we have agreed to uphold.

Despite the clear limitations on the conduct of war chronicled in the Geneva Conventions of 1949 and their Additional Protocols, we still have prominent public figures advocating for policies and activities that are in direct contravention of these international standards. Calls from Republican presidential candidates Donald Trump and Ted Cruz to carpet bomb ISIS controlled areas—without regard for the loss of civilian lives—and Trump’s support of waterboarding (or “even further”) and targeting terrorists’ family members should shock and horrify anyone who believes that the United States is a lawful country that stands behind its international commitments.

On the Democratic side of the aisle, Hillary Clinton has defended Israeli bombing of civilian areas in Gaza with the logic that Israel has a right to defend itself. Lest we believe that these views are new to the campaign rhetoric of presidential politics, we only need look back at the 2012 campaign for the Republican nomination to see that prominent candidates Michelle Bachman and Herman Cain also supported the tactic of waterboarding during interrogations of captured fighters, despite legal determinations that such actions constitute torture.

The bluster of campaign speeches is not the only venue for debate on the role of International Humanitarian Law (IHL) in the discourse of American politics. Torture is also not the only transgression of IHL that has caused concern for American policy makers. As the wars in Syria and Yemen rage on and the US presence in Afghanistan continues, the safety and security of health workers and their facilities is overshadowing the torture debate. The October 2015 US aircraft shelling of a hospital in Kunduz, Afghanistan, operated by Doctors Without Borders (MSF), brought this sacred pillar of IHL to the forefront of humanitarian and political leaders’ agendas. With today’s sophisticated aircraft navigational equipment and weapons guidance systems, how does this “human error, compounded by process and equipment failures”—as described by US military leaders—happen? MSF wanted the bombing declared a war crime while US authorities insisted it was a tragic accident, saying that the crew mistook the building for a government compound occupied by Taliban militants. 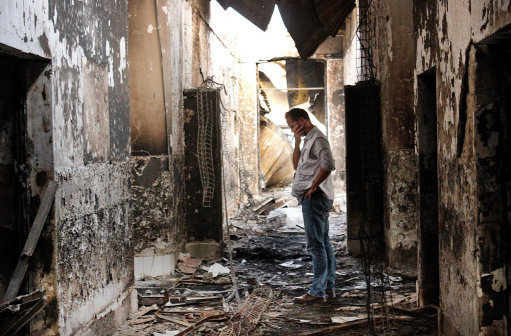 A Doctors Without Borders employee stands in the ruins of the organization's hospital after it was hit by a U.S. airstrike in Kunduz, Afghanistan.

IHL is not an intellectual exercise to stump international law students, nor is it a diplomatic conversation devoid of real world implications.

The Kunduz tragedy and similar events are also influencing the larger political debate over foreign security assistance. Since January 2016, the Saudi-led Coalition (SLC) fighting Yemeni opposition forces have bombed at least three hospitals staffed, in part, by MSF members. The Saudi military is one of the largest recipients of US military assistance in the world, raising the question as to the extent of responsibility the provider of arms and supplies should have. Do military arms suppliers have an obligation, moral or otherwise, to make their assistance conditional upon the assurances that the recipients will comply with IHL? And if they fail to comply, should that military assistance be stopped? We must remember that in many cases, the provision of security assistance is rationalized by the argument that it is cheaper for world powers to supply allies with the necessary arms to fight the sponsors’ enemies, potential or real, rather than bear the cost of the battle themselves. What is often forgotten is the reputational cost of having ones national security interests defended by entities that do not uphold the international norms of war. Guilt by association can have long-lasting effects.

As we ponder the questions here, it is important to remember that IHL is not an intellectual exercise to stump international law students, nor is it a diplomatic conversation devoid of real world implications. IHL is a set of rules by which signatories to the Geneva Conventions have agreed to limit themselves in their conduct of armed operations. The consequences of not embracing those limitations is the intentional loss of innocent civilian lives, the ruthless torture of fighters no longer in the fight, and the unconscionable threat to and destruction of protected medical personnel and their facilities as they care for the sick and wounded.

On a grander scale, ignoring IHL creates a free-for-all in the conduct of hostilities, the horrors of which led the to the adoption of the Geneva Conventions in the first place. It is the responsibility of each citizen, military member and political leader to know that the rules exist, understand their essence and be committed to their faithful adherence. The next time Mr. Trump, Senator Cruz or Senator Clinton casually dismiss the obligation of IHL for the sake of gaining a sound bite on national security issues, we need to think about what would happen if they actually walked their talk.

Brad Gutierrez is an independent researcher and co-author of “What Americans Think of International Humanitarian Law”. He holds a doctorate in Political Science from the University of California, San Diego and is a retired combat veteran of the US Air Force.