Worldwide, guns are used far more often to violate, rather than defend, the human right to life. The right to bear arms is not a human right, but a peculiar privilege granted by the US Constitution. 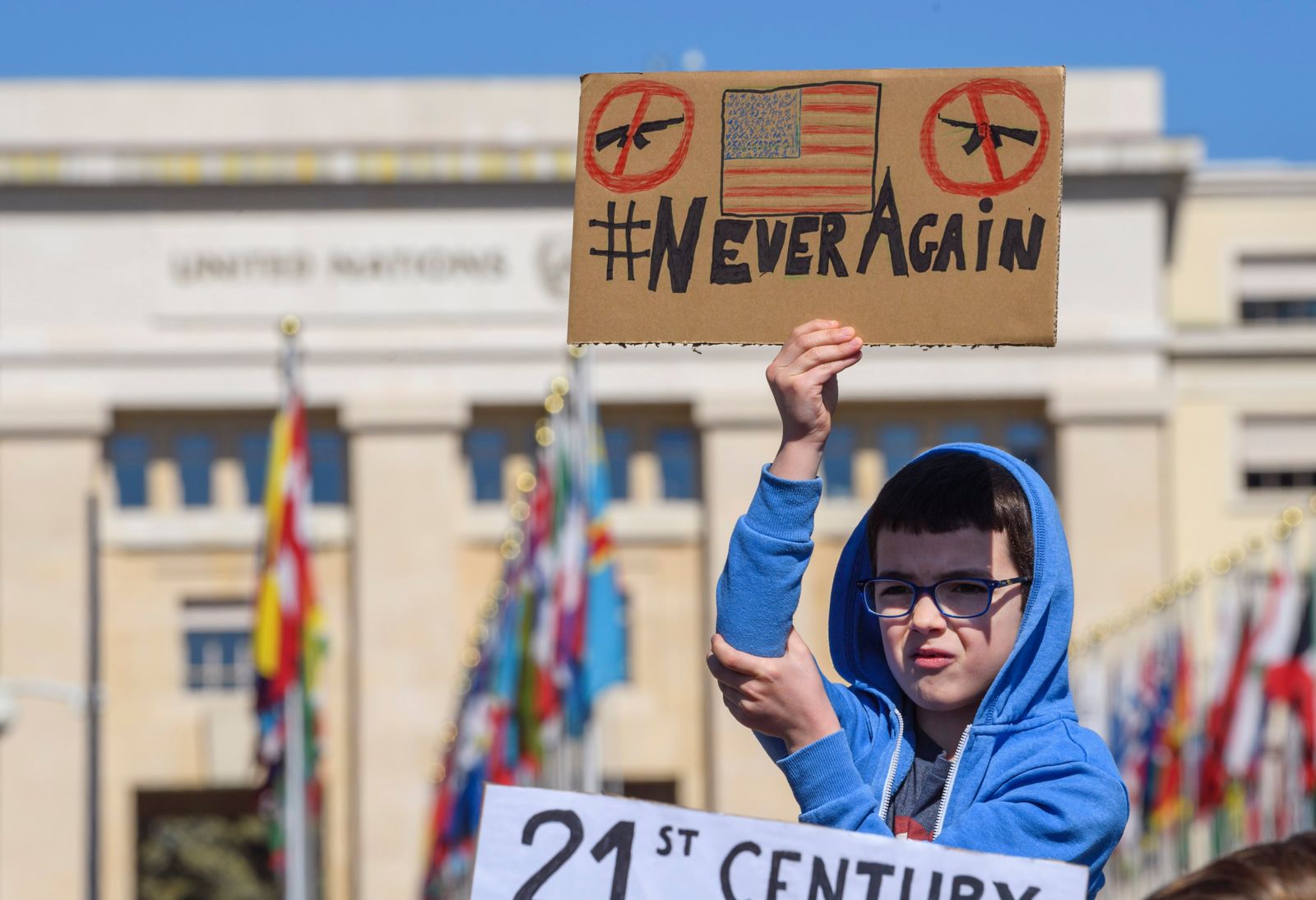 American students and expats hold signs calling for stricter gun control during in a solidarity rally with 'March For OurLives' on the Place des Nations in front of the European headquarters of the United Nations, in Geneva, Switzerland, 24 March 2018.

Gun violence has long been a problem in the United States—from the shootout at the O.K. Corral to the school shooting in Parkland, Florida. Every year, armed exchanges in the United States leave thousands dead. Seldom highlighted, though, are the tens of thousands more who survive and go on to live tormented and painful lives that cost Americans millions of dollars each day. These victims and their families demand common sense regulations to limit the accessibility of firearms. However, their calls often run into a wall of claims about how guns are essential to liberty. In essence, then, the conversation about guns in the US is one that pits the right to be free from violence against a right to buy, sell, keep and bear arms for whatever purposes one wishes.

1. The Right to Bear Arms Is Not a Human Right

Some Americans today claim that the right to bear arms is both a God-given and inalienable right. Not even close. If that were the case, it would mean that everyone in the world would be endowed with the privilege of owning and using firearms, including small children, the severely disabled, terrorists, and domestic abusers. Although all of these people have inalienable human rights, none should handle weapons.

The right to bear arms is not a human right, but a peculiar privilege granted by the US Constitution. Just nine countries in history have ever had such a right, and only Guatemala, Mexico and the US still do. Unsurprisingly, all three countries have comparatively high homicide rates. Guatemala is consistently in the top ten worst in the developing world, and the US and Mexico are among the top five worst of all OECD countries.

Inclusion in the Constitution does not negate reasonable restrictions on the privilege of possessing a firearm. To the contrary, the Supreme Court’s landmark 2nd Amendment ruling, DC v. Heller (2008), explicitly allows for regulations. The late Justice Antonin Scalia, known for his strict interpretation of the constitution, wrote: “nothing in our opinion should be taken to cast doubt on longstanding prohibitions on the possession of firearms by felons and the mentally ill, or laws forbidding the carrying of firearms in sensitive places such as schools and government buildings, or laws imposing conditions and qualifications on the commercial sale of arms.”

The Heller decision is also premised on the notion that firearms are integral to self-defense. In 2004, about 40% of gun owners said they possess guns primarily for self-defense; today, that number is closer to 63%. Bringing us to the second point.

2: Guns are used far more often to violate our right to life than to defend it.

According to international human rights instruments, we have a right to life. But it is quite rare that a gun is used to defend said right; statistically speaking, using a gun to defend one’s own life hardly ever happens. In 2017, firearms were used for self-defense about 2,000 times. This should be compared to 60,000 cases of non-defensive gun violence. This means that for every single person who defends herself with a gun, there are 30 people who suffer gun violence. Furthermore, there is one violent attack with a gun for every 5,480 Americans – a proportion that is getting more frightening every year since 2014. Even more troubling is that we do not really know why. This trend is understudied, in part because the CDC is discouraged from supporting research on gun violence.

3. Firearms are in fact a threat to human rights abroad, and at home.

Researchers do know about the devastating impact of guns outside of the US. Small arms in the hands of abusive police forces, government death squads, rebel warlords, terrorist groups, and criminals intent on attacking local populations is one of the gravest human rights concerns facing the world today.

If we analyze civil wars overseas, we recognize that promoting and maintaining peace means limiting access to guns. But if we turn that lens onto the US, we see a number of worrisome signs: the presence of groups who stoke fear about “enemies” taking over the country; people often claiming they may need to take up arms against the government; and on top of this, droves of civilians buying limitless numbers of guns. In any other country, we might label this “rebel mobilization.” Here, we just call it NRA TV (National Rifle Association Television Station).

The NRA is an easy target, but this is by design. The NRA is meant to distract from the machinations of gun manufacturers, who produce demerit goods for profit. In the last ten years, the number of guns manufactured in the US doubled. In 2016 alone, 10 million guns were produced. There are now more gun sellers in the US than there are Starbucks in the entire world.

Gun manufacturers fuel the epidemic of violence in our cities and schools. Between 2014 and 2016, the number of people killed by guns in the US exceeded the number of battle deaths in all but one of the world’s civil wars: Syria. Like criminals and school shooters in the US, groups fighting in these civil wars use American-made guns.

Figure 1. The US and battle deaths worldwide 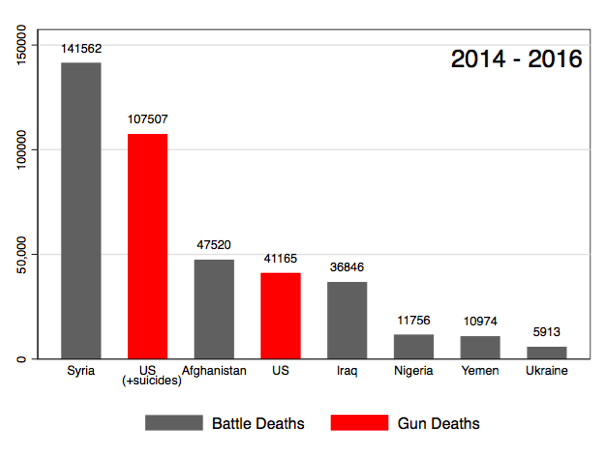 4. The US needs sustained activism in support of accountability.

The United States government is party to the International Covenant on Civil and Political Rights and thus is duty-bound to protect us from gun violence and from the gun industry. We have to hold the government and corporations accountable for failing to protect our right to life.

Human rights research finds that the most effective strategy for producing accountability, and changing abusive laws, is sustained and peaceful activism. This is especially true in cases when there is agreement from a broad swath of the public. In the US, the fringe controls policy. But now, upwards of 70% of people want greater restrictions on firearms, and more and more people are hitting the streets.

There is good reason to think that now is time to act to address this human rights crisis in the US. Worries about guns are now starting to spread to a number of unexpected places.  Large corporations are starting to abandon the gun industry, and some members of the Republican Party are opening up to sensible regulations. Still, it’s going to take a lot more effort to address this crisis in the US. It’s about accountability: Americans should join upcoming marches; take the message straight to local governments and gun manufacturerers’ headquarters; and reframe the conversation from divisive politics to the unified right to life.