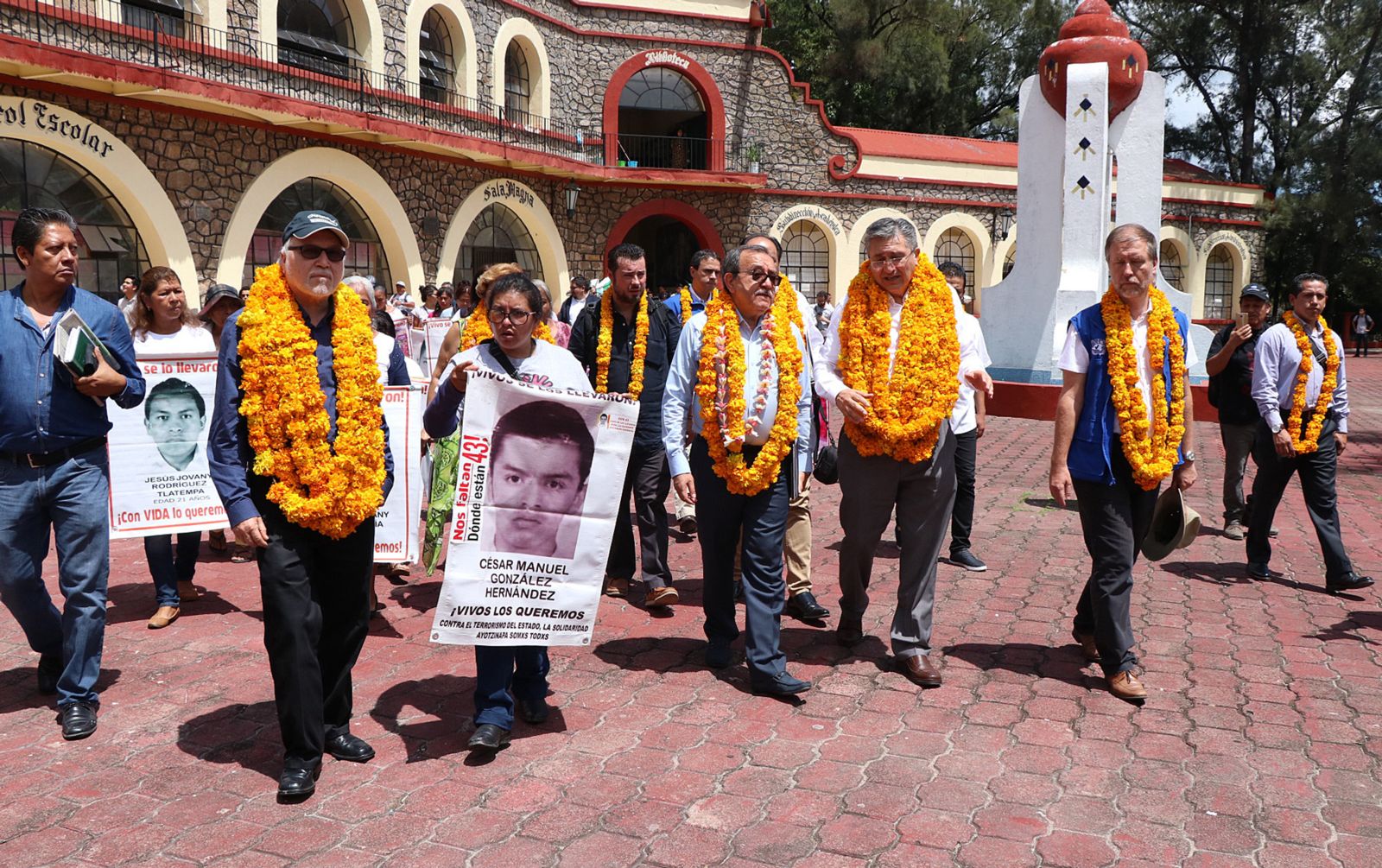 Members of the GIEI, designated by the Comisión Interamericana de Derechos Humanos (CIDH), attend a demonstration at a school in Tixtla, Guerrero.

Over decades, international human rights law developed a complex structure of bodies dedicated to the promotion and protection of rights, the work of which is often analyzed in abstract and at a distance. Yet, academic research has not included sufficient focus on the diversity of impacts across cases, scenarios, social struggles and contexts. These legal bodies are but one of the means available to tackle structural injustices, and they must often be combined with other legal and political strategies to have a real impact on the lives of people and communities.

From this perspective, we examined a novel intervention implemented in Mexico: the Interdisciplinary Group of Independent Experts (known by its Spanish acronym, GIEI). The GIEI was constituted from the precautionary measures granted by the Inter-American Commission on Human Rights (IACHR), in response to the violent abduction and disappearance of 43 undergraduate students from Ayotzinapa in 2014.

The experience of the GIEI and its impacts

The GIEI was an unprecedented legal experiment—which we have earlier analyzed in detail—carried out by Mexican human rights organizations embroiled in the fight against systemic impunity. When the GIEI began its work, the Attorney General’s Office had already made public a “historical truth” of the events, which claimed that members of the Guerreros Unidos drug cartel had incinerated the students in a garbage dump and thrown their ashes into the river. The Attorney General’s Office then expressed a rhetorical commitment to pursue and prosecute these supposed perpetrators. Without the intervention of human rights organizations, the case would have ended there.

Faced with this scenario, a coalition of rights organizations pursued an innovative strategy. They proposed forming a team of experts that would offer technical assistance to the investigations and that would benefit from institutional recognition by the IACHR and Mexico’s federal government. The Human Rights Center of the Mountain–Tlachinollan (Centro de Derechos Humanos de la Montaña–Tlachinollan), the Miguel Agustín Pro Juárez Human Rights Center (Centro de Derechos Humanos Miguel Agustín Pro Juárez) and the Guerrero Network of Human Rights Civil Organizations (Red Guerrerense de Organismos Civiles de Derechos Humanos), played a decisive role in articulating this idea and integrating the GIEI. Taking advantage of the political impetus of the case, they managed to get both the government and the IACHR to sign an accord. One key goal was that the institutionalization of this Group of Experts would maintain public pressure on the government, not allowing the Ayotzinapa case to disappear in the maze of national bureaucracy.

The GIEI´s most immediate results were two reports that underlined serious shortcomings in the prosecutor’s methods of criminal investigation and recommended actions to improve institutional performance. The recommendations were about this specific case but also touched on structural issues about the institutional response to enforced disappearances. Once the GIEI disbanded by decision of the Mexican government, it was replaced by a direct follow-up system between the IACHR and Mexican authorities.

At first glance, the GIEI could appear to be a strategy with limited reach. It has been four years since their disappearance, and the 43 students have yet to be found. Also, impunity continues to be a very grave problem in Mexico, and the national Attorney General’s Office (Procuración General de la República or PGR) continues to be sharply criticized by national and international organizations alike. However, any thorough evaluation of this process requires paying more attention to the relationship between the GIEI’s members, activists, the state, and society in general.

Although it was a technical body, the GIEI built strong links to social movements. This was neither an accidental nor natural process; it was forged by the intermediation of human rights organizations, which facilitated meetings, organized protests and linked the GIEI’s work to more structural demands against impunity. The investigation became a reference point to those seeking truth in cases of disappearances, and a source of political capital for those leading the social mobilizations around Ayotzinapa.

After a year and a half of work, the Group demonstrated that the official version of events was false. Through a new independent forensic assessment, it debunked the theory of the fire in the garbage dump and the disposal of ashes in the river. At the same time, it proved the intervention of state and federal police, as well as the presence of the army on the scene of the disappearances. In addition, it documented how a senior federal government official actively participated in covering up the facts. It also discovered the existence of a bus that had not been included in the official inquiry, along with signs indicating that it was loaded with drugs and was headed to Chicago when the students boarded it. The GIEI formulated this hypothesis as a possible explanation for the frenzied reaction of security agents that shot and detained the students before their disappearance.

In this context, the GIEI`s findings regained value only a few days ago. After President Peña Nieto supported the PGR`s version during a speech delivered in August 2018, the coalition of organizations recalled the experience of the GIEI to reaffirm their critique against structural impunity.

In addition to its concrete impacts regarding Ayotzinapa, the GIEI served as a hub to harness the social energy coming from widespread discontents. It collaborated so that the case’s notoriety could gain traction for structural demands for justice. Its role in the investigation articulated arguments that later turned into popular slogans and constituted the precedents for strengthening new strategies. Also, during its investigations, the GIEI found more than 60 mass graves unrelated to the Ayotzinapa case in the State of Guerrero. Paired with the Ayotzinapa findings, these graves brought an intense spotlight on structural impunity in Mexico, and contributed to organizing and mobilizing a broad group of social actors.

The GIEI’s work engaged the federal government in an uncomfortable dialogue with international actors that opened normally non-existent channels for accountability. It also provided tools for strengthening institutions such as the Executive Commission for Attention to Victims (Comisión Ejecutiva de Atención a Víctimas) and the National Human Rights Commission (Comisión Nacional de Derechos Humanos).

The IACHR also did its part. In other circumstances, it could have assumed a legalistic position and refused to support this innovation. However, being aware of the need to take advantage of this scenario, it activated another of its legal tools and organized a in loco visit. This type of visit—which allows Commissioners to travel into a country to interview public officials, NGOs and victims to evaluate the general situation of human rights—had not occurred since 1998. Immersed in the socio-political context created around the Ayotzinapa case, the presence of the IACHR invigorated the structural discussion of the human rights crisis in Mexico to go beyond the specific case and attest to the seriousness and scale of the overall situation.

With the GIEI, human rights organizations conceived a legal experiment to sustain the vitality of a social movement, create a platform to show the magnitude of the crisis, and position proposals for structural reform. This experience suggests that, evaluated in the framework of more complex strategies, international mechanisms can produce innovative synergies to strengthen projects for institutional transformation that are promoted from below—in this case, from the mountains of Guerrero.

Gabriela Kletzel is a lawyer specialized in international human rights law (University of Buenos Aires) with a master’s degree in law (LLM) from New York University (NYU). She is the director of international work at CELS (Centro de Estudios Legales y Sociales).

Angel is a SJD Candidate at Harvard Law School and Lecturer at  Boston University in the International Human Rights Clinic. His Twitter is @AngelGCabreraS.