Eighteen months after Ayotzinapa, Mexican civil society has pulled together in new and promising ways to challenge the state.

Last week marked 18 months since the disappearance of 43 college students at the hands of Mexican police, arguably the most important human rights event in the Americas in decades. We regard all violations of human rights—especially those that deprive a person of their basic right to life and physical integrity—as grave. But the unique importance of the disappearance of the Ayotzinapa students stems from what it can teach us about the nature and status of human rights; the power of movements relative to the power of states; and the ways in which the international community, woven together by dense treaty networks proclaiming liberal values, works in practice.

Since September 26, 2014, we have put together a timeline, in English and Spanish, highlighting the key events of the Ayotzinapa disappearances, including local, state and international state and non-state reactions, key protests, and advances in the investigation.

In addition, we systematically analyzed 334 different utterances made by those closest to the case. We also pored over judicial data and reporting to try to understand how the calls for justice translated—or didn’t—into actual changes.

Sadly—and surprisingly or not, depending on your worldview—all the protests and international pressure and consensus around “Sí—fue el estado!” (“Yes—it was the state!”) have not led to accountability or transparency. We still don’t know where the students are; low-level arrests convince very few that justice has been served; and there have not been substantive political or institutional changes. The international cost to Mexico has also been low—with the exception of a five million/15% cut in US foreign aid to Mexico in October of last year due to human rights concerns, Mexican President Peña Nieto has not paid a high political price internationally. 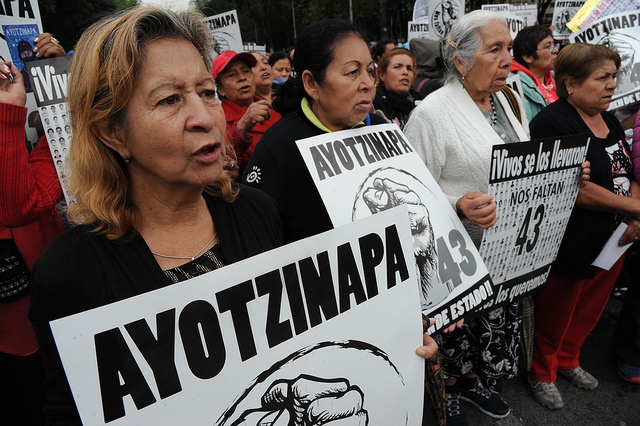 Protests condemning the disappearance of Ayotzinapa students included the “usual suspects” but also expanded to include newly emerging contingents of Mexican civil society.

We have seen the international human rights community involved in the investigation of the disappearances in integral and innovative ways.

Yet, we have seen the international human rights community involved in the investigation of the disappearances in integral and innovative ways. In an unprecedented action, the Inter American Commission on Human Rights sent an independent Group of Experts to conduct their own investigation into the disappearances. The Argentine Forensic Anthropology Team, already in Mexico at the time of the disappearances, has played a similar role—derailing the state’s attempts to close the case with flawed forensic “science”.

Importantly, these international groups are embedded within Mexico. Their impact is not within primarily international contexts—rather, they have assumed public and central roles in Mexicans’ understandings of the facts of this case. The Mexican press carefully covered Group of Experts sponsored by the Inter-American Commission on Human Rights (IACHR), who presented their findings in Mexico City, not Washington. The Argentines have set up shop in Mexico City, providing an independent and ongoing check on the government’s forensic investigations not only in the Ayotzinapa case, but in others in which the government is implicated as well.

This is an important shift for our understanding of international human rights. Activists have long sought to establish that no one is above the law by strengthening international courts and institutions. The actions of the Expert Group and the Argentines show us that embedded international actors can leverage their legitimacy and significantly strengthen within-country calls for justice. As a cynical testimony to the power of these international actors within Mexico, in the past several weeks Mexico has opened a politically motivated investigation into the executive secretary of the IACHR—the key IACHR official in establishing the Expert Group.

Key to the success of the Argentines and Group of Experts has been the support and diligent reporting and organizing of local human rights organizations like Tlachinollan and Centro ProDH. We coded the “utterances”—each time an organization makes a public pronouncement including the term “Ayotzinapa”—of 14 relevant state and 17 non-state actors, 12 of which are international, and found that Mexico-based NGOs led the reaction to Ayotzinapa (see Figure 1). By June of 2015, chatter had slowed down, and consisted mainly of back-and-forth between the Expert Group, the federal government and the lead Mexican NGOs.

Less than two weeks after the events, 101 national and international civil society organizations signed a joint statement condemning the disappearance of the Ayotzinapa students and calling for organized action. Protests included the “usual suspects”—locally-based rights groups, leftist students and long-established NGOs—but also expanded to include new groups like the Contingente Carriola (the Stroller Brigade), government sanitation workers, urban punks and new civil society groups like Los Otros Desaparecidos, a group of 400 families from Guerrero all looking for their missing family members. These efforts have helped put the broader issue of disappearances—which total at least 26,000 cases since 2006 according to the government’s own estimates—on the map. These groups used coordinated social media, including more than 25 trending hashtags like #CompartimosElDolor and #AyotzinapaSomosTodos to organize and mobilize.

In our efforts to understand how Ayotzinapa has affected Mexico, we have also gone down the rabbit hole of information reporting within the Mexican justice system. INEGI, the Mexican state’s official statistical reporting unit, has overhauled their information systems since the current wave of violence emerged in 2011. While this overhaul had the stated intention of improving judicial transparency and making it possible to discern judicial results, after analyzing this data we found serious inconsistencies that make an accurate analysis of the justice system’s efficiency impossible.

For example, the investigators’ offices use incompatible units of analysis (in some cases they count the number of files open; in other cases, crimes). Missing data from several states make it impossible to know how and whether cases of homicide advance through the judicial system, and also make it impossible to know how many cases result in the sentencing of a responsible party.

This lack of transparent judicial records reinforces the arguments made by various policy makers in the aftermath of Ayotzinapa: the judicial system needs urgent reforms that can facilitate the proper punishment of crimes in Mexico. However, without a proper understanding of the current performance of the judicial system, policy makers cannot pinpoint where reform is needed, and thus lack a starting point for policy planning.

The disappearance of the Ayotzinapa students could be read as the canary in the coalmine of human rights: a close ally of the United States and burgeoning democracy is unmoved by massive domestic and international mobilization. This said, the embedding of international actors and the deepening of civil society networks tell us that the struggle for human rights is adapting and vibrant. The lack of judicial transparency, however, is deeply troubling—and is a shining example of how obfuscation of key indicators impedes any efforts at change: if we do not know where the bar is in terms of justice, it is difficult to begin to imagine what progress will look like.

Janice Gallagher is a postdoctoral fellow at the Watson Institute for International and Public Affairs, and will join the Rutgers University-Newark Department of Political Science as an Assistant Professor in the Fall of 2016. . She holds a PhD in Government from Cornell University, and earned an MA in Teaching at Brown University. She conducted more than two years of fieldwork in Mexico and Colombia, and previously worked as a human rights accompanier in Colombia.

Paula Martinez Gutierrez is originally from Mexico City. She is an undergraduate student and research assistant at Brown University. Ms. Martinez majors in International Relations and is a frequent contributors to the Brown Political Review.