As the US prepares for president Trump, anyone who cares about human rights should be alarmed that he has pledged to restore torture as one of his top five priorities.

During the primary season, Republican Party candidate Donald Trump, who is now president-elect of the United States, pledged to bring back  waterboarding “and much worse.” Like most other Republican contenders who vied for the 2016 nomination (and eleven of the twelve Republican contenders in the 2012 race), Trump ran on promises to resurrect the torture techniques authorized for use after 9/11. His premise—and that of other pro-torture candidates—was that these techniques “work”, and that the kinds of people subjected to waterboarding and other forms of brutality during interrogation and detention deserve it. They argued that the cancelation of torture by President Obama in 2009 was a mistake.

While the Democratic Party nominee, Hillary Clinton, made no such promises to restore torture, she also gave no indication that, if elected, she would pursue accountability or declassify information necessary to reshape public discourse. Today, a majority of Americans consider torture jusifiable because they have been led to believe it works, or that those foreign Muslims subjected to torture deserved it.

Indeed, popular support for torture has become a litmus test for a particular brand of hard-eyed patriotism on the American political landscape. And that brand has prevailed with the election victory of Donald Trump and the reinforcement of Republican control over both houses of Congress. As the reality of a Trump administration starts to set in, we should ponder whether that new reality will include a return to torture. 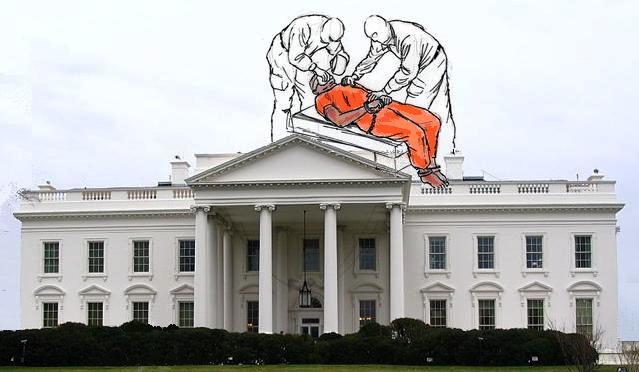 White House endorsed waterboarding. Many human rights-violating governments have pointed to the US example to justify their own egregious practices.

Many governments engage in torture. But what makes American torture distinctively consequential relates to the role that the United States plays in the world. Many human rights-violating governments have pointed to the US example to justify their own egregious practices, brushing off US criticisms of those practices as blatant hypocrisy.

In the US “war on terror”, the will to torture spawned the will to drone strike and extra-judicially execute. The consequences of this trajectory have been momentous and global. To shore up human rights at this juncture, the most pressing imperative is the need for Americans who care about human rights to construct a new narrative about US torture and its consequences, one that integrates lessons from the mistakes and deeply flawed policies that the US administration has made under the cover of national security. Specifically, constructing this new narrative would require more declassification, more litigation, and more civic education

The importance of declassifying information about the torture program cannot be underestimated.

The importance of declassifying information about the torture program cannot be underestimated. This program was illegal, ineffective, and counterproductive to the very goals of national security for which it was instituted. US torture served as one of the major recruitment tools for the old and new organizations against which the United States remains at war, including the Islamic State. The torture program has damaged relations with allies and degraded respect for international law norms and rules. On top of that, it was an utter failure in producing actionable intelligence. In 2012, the Senate Select Committee on Intelligence completed a 6000-plus page report on the CIA’s RDI (rendition, detention, and interrogation) program which, purportedly, contains abundant evidence and analysis of its failures and strategic costs. But this report remains classified, except for the heavily redacted 500-page executive summary, which was released in December 2014. As long as this information remains a secret, falsehoods and fabrications about the efficacy of torture can continue to be bought and sold in the public square. Citizens should pressure their senators and the Obama administration, while it still holds power, to release this report because it is the most authoritative account of the history of post-9/11 torture.

Litigation is equally important because the Bush administration “legalized” torture, and that bell cannot simply be un-rung. While the damage could berepaired through new legislation, given the dysfunction of  Congress as well as public attitudes supporting torture, this prospect is inconceivable. Therefore, litigation is the only available option at this point, not only for rolling back the law-defying interpretations adopted by the executive branch and holding the line in which torture has been re-prohibited, but also for accountability.

Real and robust accountability is a means of deterring in the future a repeat of crimes of the past. In this regard, the pursuit of accountability for crimes of state in Latin America has contributed directly to a better record of democratization and human rights there than in other regions.  Of course, it took Latin Americans more than a decade to begin pursuing their own torturers, time that was needed to see a change in public attitudes and balances of power. The consequences resulting from the Obama administration’s refusal to pursue accountability for torture include the fact that at least one of the torture policy’s architects is now being considered for a cabinet position in the incoming Trump administration.

In recent months, there have been several positive developments in the realm of litigation. The two psychologist contractors who were hired and paid $81 million to design and run the CIA torture program, James Mitchell and Bruce Jessen, are being sued in Washington State by several victims. The court not only is allowing this case to proceed, which is a novel break from the judicial record of dismissing cases brought by victims of US torture, but also has ruled that several top officials from the CIA can be called as witnesses to testify. And in October, the Fourth Circuit Court of Appeals reinstated a previously dismissed lawsuit by victims of torture at Abu Ghraib against the private contractor firm CACI Premier Technology. In a concurring ruling, one judge emphasized, “It is beyond the power of even the President to declare [torture] lawful…. The determination of specific violations of law is constitutionally committed to the courts, even if that law touches military affairs.”

Finally, I would emphasize the importance of civic education. There is a need for citizens to learn and to teach the lessons of history. We know now that certain types of torture prevention do work, with the right combination of factors, and civil society must do more on that front. Civic education begins with a battle for narratives to inform people and contribute to a greater public understanding about what is wrong with torture. Civic education also includes empowering people to aggressively assail the vocal pro-torture constituency. It is incumbent upon those of us who care about these issues to produce empirically solid and analytically persuasive arguments against torture—and against those who support it—in order to demonstrate respect for democracy and the rule of law in the United States, and for human rights and humanitarian principles on a global scale.

Given the outcome of the 2016 election and the victory of an ardently pro-torture candidate, civic education about torture and organizing against it may very well become the twenty-first century version of the anti-slavery abolition movement. Slavery and torture have in common the degradation and destruction of some human beings for the benefit of others. Railing and working against these practices is one raison d’etre of the human rights movement.

Lisa Hajjar is a professor of sociology at the University of California—Santa Barbara. Her publications include Courting Conflict: The Israeli Military Court System in the West Bank and Gaza and Torture: A Sociology of Violence and Human Rights. She is currently working on a book tentatively titled The War in Court: The Legal Campaign against US Torture in the “War on Terror.”