No matter how good our ancestors were in creating the international human rights system, it cannot change that we might need different options now.

The international human rights system, with its diverse global movements, is epoch-making, allowing stigma to be applied to errant states on matters of crucial global concern. But promoting its exclusive relevance in the face of injustice, as if the alternative were apathy or despair, is simply not going to cut it.

In fact, the election of Donald Trump furnishes an opportunity to transcend the naïve celebration and apocalyptic criticism of international human rights in the name of balance about their true importance. The disagreement of my friends Stephen Hopgood and Kathryn Sikkink may miss the point, but not simply in their mutually cancelling extremism. Neither one appreciates that human rights could well complement a political response to populism, but not compensate for the failure to construct that response in the first place.

Sikkink has my support to the extent that she emphasizes the crucial achievement of global judgment on states, especially ones that depart radically from a now worldwide consensus around civil and political liberties, including racially discriminatory treatment. But rather than facing our unique present, Sikkink is turning to history for the wrong reason: attempting to restore a now obsolete status quo ante that treated the past as a fund of uplifting examples—good people struggling for just results against mindless evil—to argue for an exclusively necessary framework now. Real history not only marks undoubted achievements but stares strict limits in the face. And no matter how good our ancestors were in making possible some political options, it cannot change that we might need different ones now.

The Trump presidency reveals three limits with remarkable clarity. One concerns enforcement: for all the stigma the human rights system imposes, remedies have always been another matter—a point of special relevance to the United States, where they are historically non-existent. Another is the comparative frailty of human rights norms and movements so far in protecting non-citizen victims of errant states, precisely the people who can most fear losing their rights under Trump’s presidency. The last, and easily the most important, is that the human rights regime simply bypasses the challenge of middle class dislocation and stagnation that have driven populist revolts the world over.

In their short historical era of prominence, human rights have rarely gone beyond the ability to stigmatize...

In their short historical era of prominence, human rights have rarely gone beyond the ability to stigmatize, especially when it comes to international enforcement. Regional protection schemes have done a bit better than international ones, for not for Americans. It may be true in some contexts, as Beth Simmons has influentially argued, that enforcement occurs when domestic movements rely on extra tools provided by international norms. But sometimes it simply seems counterproductive, inopportune, or unnecessary to turn to them. We can emphasize, for example, how American blacks, along with diverse global actors, contributed to the origins Convention on the Elimination of Racial Discrimination. But we must also add that the convention’s actual contribution to the civil rights struggle in America has been largely nugatory. Next to no advocates in the Black Lives Matter movement have seen the value of internationalizing it in the name of human rights. 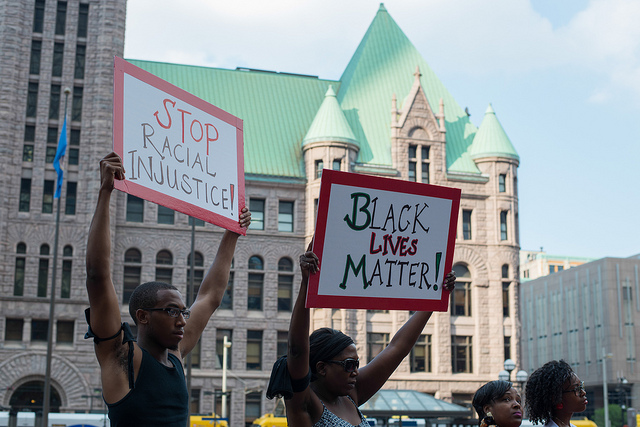 Protestors at a rally in Minneapolis, Minnesota in 2013. Next to no advocates in the Black Lives Matter movement have seen the value of internationalizing it in the name of human rights.

It strikes me as obtuse to think that American citizens who are ethnic minorities, and therefore understandably fearful of Trump’s depredations, must or will depend on international human rights to save or even help them from the likeliest scenarios. This is especially the case since American human rights activists have long ago given up on making international legal rights, including the ones in the few treaties the United States has ratified, domestically actionable. One wonders if the situation might have been different had the leading American advocates tried to do so with the same zeal with which they promoted humanitarian interventions and criminal accountability for the strongmen of other nations—but now it is too late.

In any event, I have my doubts about how great a risk Trump poses to American citizens, and thus the classic problem international human rights were designed to solve. For now I trust in constitutional traditions and institutional protections that no demagogue with razor-thin support can easily shirk, especially when important elites like the military share no sense of real emergency or threat to vested interests. The same is not true, alas, of two groups of non-citizens: those facing deportation under Trump’s heartless maximalism—even beyond the heartlessness of his predecessor, who deported so many already—and those in America’s now global security zone apt to suffer under Trump’s escalated militarism. Yet if these two groups are the likeliest victims of Trump’s excesses, we must add in the same breath that international human rights offer weaker norms for their protection and therefore will place less heavy a stigma on their persecutor. And of course enforcement mechanisms are next to non-existent—especially to the extent that Trump abjures his crazy talk about torture to stick to Obama’s pattern of relatively humane war without chronological or geographical bounds.

In the end, however, the chief limit of international human rights politics in the age of Trump is that they offer the wrong norms and wrong remedies for the economic fundamentals. The poorest of Americans were not Trump’s essential supporters; instead it was middle classes— especially whites willing to play a classic blame game after the grinding experience of dislocation and stagnation—who put him over the top. A politics to counteract populism will not take the form of mobilization for the socio-economic rights for the poor, important as such work remains, but instead a broader engagement with distributive inequality. As I have argued before on this site, however, the international human rights regime does not even have the norms to address this problem, let alone the strength to achieve broader distributional fairness of the welfare states of yesteryear. Human rights advocates can dissociate themselves from the market fundamentalism with whose success their movement shares the same lifespan, but not bring down a companion they have so far left undisturbed.

Of course, this hardly means, as Hopgood suggests, that we must simply return to national politics as if the fate of democracy locally were unaffected by the politics and economics of the international order. We need a new cascade of internationalist justice—beyond just retribution for arch-criminals—as much as a series of national new deals. But it does mean that human rights do not address (let alone solve) all problems. They serve their limited purposes without displacing the need for a new politics to subvert populism, which will have to be global as much as it is local. To the man with a hammer, it is said, everything looks like a nail. Now Trump is on the brink of power, and to hammer away at human rights is to neglect the desperate need for other tools.