Business should heed the views of human rights defenders, and do more to protect their crucial work—which advances the rule of law that benefits business too.

Global businesses and grassroots human rights activists may seem like strange bedfellows.  But as attacks on basic democratic freedoms and the rule of law intensify around the world, they may have more shared values and interests than one might think.

We know businesses are driven by the bottom line. If they didn’t seek to increase profits, they simply wouldn’t exist. But we also know—and many business leaders are coming around to the idea—that long-term success relies on more than just profit generation and is linked to a range of external factors such as transparency, certainty, stability. And a social license to operate.

Failures to understand that social license, and in particular to prevent and respond to the human rights impacts of their work, have thrust many global businesses into an unwanted spotlight. They didn’t need to find themselves there.

Because human rights defenders use public advocacy as a key tool for change, businesses often make the mistake of seeing them as additional drivers of cost.

Reputational damage and operational risks for a company are expensive. Because human rights defenders—such as lawyers, trade unionists, community leaders, or NGO workers—use public advocacy as a key tool for change, businesses often make the mistake of seeing them as additional drivers of cost.

However, business should see human rights defenders as priceless allies. They are the canaries in the coalmines, pointing to when governance failures become real financial, legal, and reputational risks to business. They are also the witnesses to corporate abuse of communities and the environment.

Because of this, the work of defenders often makes those in power uncomfortable—both states and non-state actors. They are targeted with laws and policies to stifle their activities, and face intimidation and threats to their work and their lives.

Yet without the work of defenders, whole societies and economies lose out. And that means businesses lose out, too.

Take the case of the 24 April, 2013 Rana Plaza factory collapse in Bangladesh. When the dust cleared, the largest industrial accident in contemporary times resulted in the deaths of 1129 workers. Multinational brands who sourced from Bangladesh had long known the government had little capacity, and less will, to make important changes—hiring and training labor inspectors, updating fire codes and retrofitting buildings to meet them, and so on. They also knew local authorities and business partners had engaged in active suppression of labor unions and workers speaking out. By many accounts, if those voices had been heard, the tragic death toll would never have been so high. 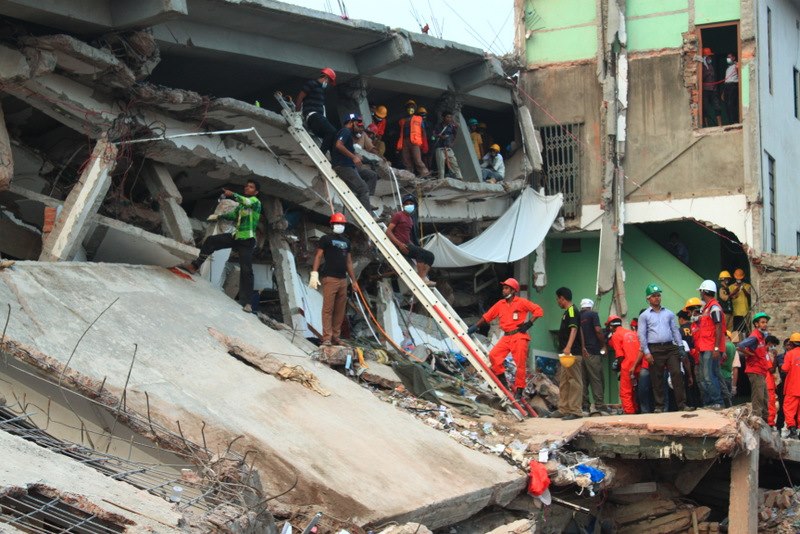 The aftermath of the 2013 Rana Plaza factory collapse in Bangladesh.

For those defenders trying to address such concerns on the ground it is, in a very real sense, a matter of life and death. Just ask Laura Caceres, who spoke at this year’s UN Forum on Business and Human Rights to honor her mother. Berta Caceres was gunned down last March in Honduras for her work defending campesina communities against abuses linked to the Agua Zarca dam.

The global response to Rana Plaza kicked off a sustained effort by major trading partners—and home countries—the US and the EU, as well as the ILO, to improve coordination and adopt a structural approach to improving labor rights in Bangladesh. The multi-stakeholder Bangladesh Accord has workers and unions at the table and on equal footing with government and businesses to improve workplace safety and worker voice. Berta Caceres’ death led the Finnish state and Dutch pension fund FMO to divest from the project. It has also refocused the attention of states, development organizations and the UN to the ongoing harassment of defenders in Honduras.

These cases show business can make a difference. It has a unique ability to create, maintain, and defend space for civil society through three tools: leverage, leadership, and partnerships.

How do these work? Take as an example a government drafting a law that aims to close down space for NGOs to operate. In addition to running counter to international law, this would also close off channels for businesses to benefit from NGOs’ work—whether implementing community projects or helping train workers. So how might businesses respond?

They can use the leverage provided by access, personal relationships and market share to push back on authoritarian impulses. To take just one example, when 30 global brands and global trade unions joined together to speak out against violent dispersal of protests and detention of activists in Cambodia in 2014, not only were the activists released, but the underlying issues of minimum wage took center stage in brand discussions with the government.

Businesses, and especially progressive businesses, also need to show leadership. In 2015, Adidas released a policy statement on human rights defenders that clearly led the pack, creating a company-wide commitment to speak out in defense of fundamental freedoms in the countries where they source. It takes a lot for a business to get in front, especially when they know that NGOs will be watching carefully to see those policies implemented. But setting the bar high has consumer appeal and can drive a race to the top.

Finally, businesses have resources. Partnerships directly with NGOs can be contentious, and businesses need to listen to and address the concerns of co-optation and whitewashing. But the global environment for traditional funding mechanisms is increasingly toxic. According to UN experts and leading funders, nearly a hundred governments have put limits on NGOs’ operations, including the ability to accept foreign (especially NGO) funding. For the financial survival of civil society, seeking support from businesses might be an option—if it is on equal footing and with clear redlines to maintain independence.

Sarah Brooks works for the Geneva-based NGO, the International Service for Human Rights. She leads their work in Asia, and also supports defenders seeking to advance corporate accountability.