Dominic Ongwen faces trial at the ICC for crimes of which he was also a victim—forcing us to reevaluate dichotomies of guilt and innocence.

Dominic Ongwen, a former child soldier and former senior commander of the Lord’s Resistance Army (LRA) in Uganda, goes on trial this month at the International Criminal Court (ICC). He is charged with 70 counts of war crimes and crimes against humanity, which he allegedly committed against civilian populations in camps for internally displaced persons in Northern Uganda. Ongwen—conscripted at age 14 according to court documents—is the first person facing trial at the ICC for crimes of which he was also a victim: forced conscription and enlisting of children under 15 into armed forces.

The trial before the ICC will aim to determine whether he is guilty or innocent. But the reality of Ongwen’s actions and the context in which they occurred—including the trauma that he himself endured—is much more complex than guilt versus innocence, as it is for so many other children conscripted illegally. That is the reality we must also engage, and the public debate regarding his dual identity as both victim and perpetrator will continue long after his trial has concluded. For those of us supporting justice globally, there is a need to broaden the discussion beyond simple dichotomies if we want to help bring a sense of justice to the many victims of the conflict in Northern Uganda.

There is a temptation to simplify the child soldier phenomenon by declaring children associated with armed groups as innocent victims under international law. Typically, they are provided with reintegration assistance focused primarily on their individual needs and then sent back to their communities. However, what we have in seen in places like Northern Uganda, Colombia, Nigeria, Sierra Leone, and Liberia, among others, is that regardless of how the law typifies these former child soldiers, many communities see them as perpetrators responsible for violations that are sometimes grave crimes.

In Northern Uganda, as part of their indoctrination, child soldiers were forced to take part in burning villages, pillaging, mutilations, and abductions. As a result, some communities view them simply as kidnappers and killers. Many in the community have expressed resentment that former child soldiers received reintegration packages while they themselves received no reparation for the displacement they suffered and the loss of family members, land and livelihoods.

This debate centers on a question of a child’s agency (the capacity to act based on their own will), and when it starts and stops. Legally, that turning point is marked by age 15 or 18 (depending on the jurisdiction), but socially how that agency is perceived or expressed depends on a number of other factors, including the popular narrative around the conflict, the socioeconomic conditions of both the former child soldier and receiving community, culturally ascribed gender roles, and the impact of the conflict on the receiving community and whether they feel a sense of acknowledgement and justice for the violations they suffered at the hands of combatants.

An individual or purely legal approach is not enough to understand and address the problem and consequences of child recruitment and involvement in armed conflict.

Each context has its own specificities, but what is clear is that an individual or purely legal approach is not enough to understand and address the problem and consequences of child recruitment and involvement in armed conflict; rather, this needs to be complemented by a more communal, social perspective as well.

While the intense focus this month will be on Ongwen, the blurred line and ambiguity between victim and perpetrator and questions of positive and negative agency (for example, the agency exhibited by a child soldier to gather the courage to escape as compared to the agency of a child to become a fighter to advance their political or social ideology), also affects women and girls who were abducted by the LRA and often used as sex slaves or forced brides of its soldiers. When they returned from captivity, they were offered amnesty by the Ugandan government, treated as innocent victims by child protection agencies, and yet are seen as perpetrators by many in the communities from which they were abducted. To this day, as highlighted in the ICTJ report From Rejection to Redress, many of these women continue to suffer discrimination based on the presumption that they embody and are responsible for all past violations committed by the LRA, as are their children born of wartime sexual violence. 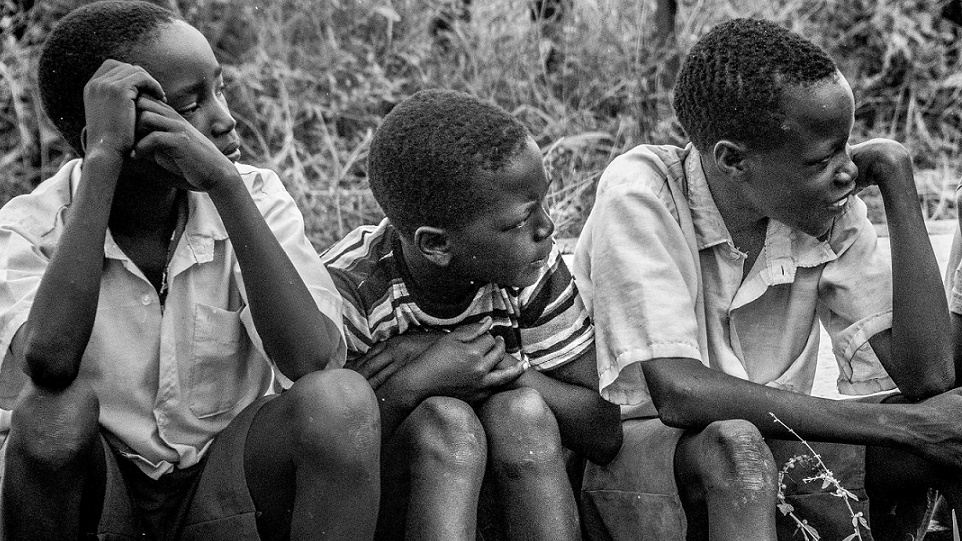 Children in Barlonyo, Uganda, the site of war crimes reportedly perpetrated by Dominic Ongwen. The ICC trial of Ongwen--once himself a child soldier--will illustrate the blurred lines between victim and perpetrator that complicate judicial proceedings against the LRA in Uganda.

Deprived of education, access to land, and a source of livelihood, many formerly abducted young women who filed for amnesty did so for the 263,000UGX (approximately $70 USD) that came with the reintegration package. And with that, the Government of Uganda claims to have settled the matter and facilitated reintegration. But, as a formerly abducted young mother—who is now a leader in her community—asked, “What will 263,000UGX do for a mother who returned with three children?” Having herself rejected the offered amnesty, she explained, “I will stand firm, I will walk straight and say I am not a criminal. I didn’t do anything wrong. I am not happy with the government of Uganda because it is not helping us; no action has been taken. The first [group]… stigmatizing us is the government of Uganda.”

For victims of the LRA to feel a sense of justice, Ongwen’s trial should also be used as an opportunity for Ugandans to open discussions about the enduring consequences of conflict. This trial at the ICC should be complemented not only by concerted action by the Ugandan criminal justice system, but also by other processes that can contribute to a broader and more nuanced sense of justice, including restorative measures that will foster healing, rehabilitation, reintegration, and recognition of dignity.

Whether the court finds Ongwen guilty or not will have significant impact for some victims and for many in the region who believe in the value of the ICC. But many other victims of both LRA and UPDF (Uganda People’s Defence Force) atrocities will fall outside the scope of this case, and they may not see this trial or its verdict affecting their lives in a meaningful way.

To bring broader meaning to this process, a multi-faceted response is needed from the Ugandan government. Such a response should include support for the International Crimes Division of its own court system, official acknowledgement of harms suffered, opening of spaces for dialogue and truth telling in order to clarify the context and responsibilities for the violations, and a strong reparations program. For women who were victims of sexual slavery or forced marriages and their children, the needed response is even more specific: access to land for rejected and ostracized children, reforming discriminatory gender norms that make it very difficult for a single mother to access resources and provide for her children, and state-sponsored scholarships that would support their children through school.

As international attention refocuses on Northern Uganda through the Ongwen trial, let us make sure not to reduce the notion of justice to the fate of a single man, but instead use it as a catalyst to examine and redress the enduring impacts of the conflict in Uganda on its many victims.

Sarah Kihika Kasande is the head of the Uganda office at the International Center for Transitional Justice (ICTJ).

Virginie Ladisch is the head of the International Center for Transitional Justice's Children and Youth program. She has provided technical support on ways to engage children and youth in transitional justice processes in Canada, Colombia, Cote d’Ivoire, Kenya, Liberia, Myanmar, Nepal, and Tunisia.