A key concern for many Argentinians, among the numerous changes Mauricio Macri’s government has implemented, is the dismantling of hard-won human rights gains.

In March, during Francois Hollande’s visit to Argentina, the president of France planned to meet with the Grandmothers of the Plaza de Mayo, an organization dedicated to finding children stolen during the Argentinean dictatorship. Only 48 hours before Hollande’s arrival, the country’s new president, Mauricio Macri, unexpectedly visited the former Officers’ Mess at the Navy’s Petty-Officers School of Mechanics (ESMA)—a former clandestine Detention Center renamed the “Space for Memory and for the Promotion and Defense of Human Rights” in 2004. The very next day, Macri met with the Grandmothers and Mothers of the Plaza de Mayo at the presidential home Quinta de Olivos, having declined to receive them until that point due to lack of time.

These sudden visits follow criticism from citizens and human rights groups that the new president has been dismantling the country’s hard-won human rights mechanisms. Macri is an engineer, wealthy businessman and the first “new right” leader in Argentina since the return to democracy in 1983. He assumed the presidency on December 10, 2015 with a margin of 2.68%, following twelve years of consecutive presidencies by Néstor Kirchner and Cristina Fernández de Kirchner. During the Kirchner period, executive, legislative and judicial powers worked together in unprecedented ways to investigate and try people accused of crimes against humanity. Between 2006 and 2015, the courts conducted 153 oral hearings about crimes committed by the dictatorship. The courts have condemned 660 persons, absolved 60 others, and are still investigating a further 353. As a result, the local human rights movement acknowledges the Kirchners’ commitment to transforming the demands of the Memory, Truth and Justice process into actual state policy.

Macri seems intent on  distancing himself from human rights policies to emphasize his commitment to “change.”

Macri, however, seems intent on reversing much of this work, distancing himself from human rights policies to emphasize his commitment to “change”—a key word in his campaign. Macri’s term in office had barely begun when the administration began referring to the former Detention Center as a “campus” rather than as a memorial. The day after Macri assumed the post, the widely read, right-wing newspaper, La Nación, criticized the ongoing human rights trials as “scenes of vengeance” and demanded that they end. A wide range of activists, civil society and journalists immediately repudiated the publisher. Like philosopher Verónica Torrás has said, the broad level of consensus about the judicial process is a foundational covenant to Argentine democracy. To disrupt that is to disrupt everything.

A group of journalists immediately asked the president to continue the trials, and Macri assured everyone the courts would remain autonomous. Human rights organizations pointed out, however, that “judicial autonomy” did not guarantee the trials’ continuation. The independence of Argentina’s courts has been somewhat precarious for a long time, and the president could still affect procedures by deactivating specific areas of the state administration that are meant to support the judicial process.

On February 23, 2016 a number of rights groups delivered a petition to the president, expressing their “deep concern” over his rollback of human rights policies. Signatories included the Mothers and Grandmothers of the Plaza de Mayo, the Center for Legal and Social Studies, the Sons and Daughters for Identity and Justice (HIJOS), and Family Members of the Missing and Detained for Political Reasons. 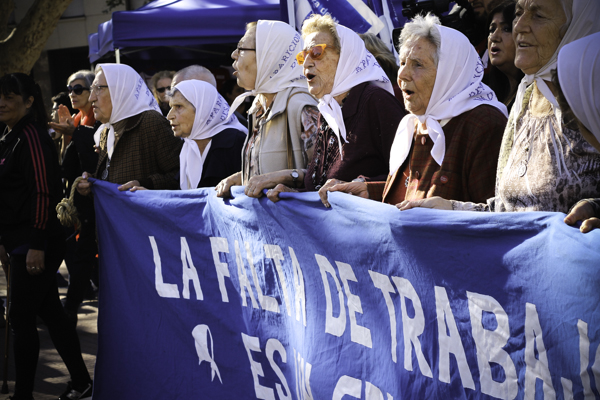 Through a series of measures, the president has already dismantled and undermined those state agencies dedicated to human rights investigations. He laid off over 41,000 public employees in the administration’s first four months, including researchers in the field of human rights. In January, the government eliminated a sub-department of the Central Bank dedicated to investigating the banking and financial system’s complicity in the former dictatorship. At the Ministry of Defense, the branch for human rights and international humanitarian law—in charge of analyzing the Armed Forces’ classified documents—avoided layoffs, but essentially ceased operations when the state stopped assigning it work.

The state, moreover, has stopped consulting this branch about the criminal records of Armed Forces members newly appointed to government. As a result, officers formerly involved in human rights abuses may potentially become part of the new administration. The state has appointed retired military officers to posts held by civilians since the democratic transition, showing that Macri is inclined to return military personnel to government. This makes many Argentinians quite nervous.

The new government also deactivated two human rights-related sections of the Ministry for Security. The first coordinated efforts to identify missing persons, while the second investigated the kidnapping of children during the dictatorship. The government also made changes to the Ministry of Justice, especially to programs affecting the truth and justice processes. And the last wave of layoffs in February hit a sector of this ministry that is dedicated to freezing accounts of fugitive military personnel and investigating companies accused of crimes against humanity. In December 2015, the president also unilaterally appointed two Supreme Court justices, ignoring the traditional consultations with Congress.

The new government is doing more than undermining and demobilizing state agencies. On December 22, 2015, Argentinian security forces forcibly suppressed workers of the poultry company, Cresta Roja, during a protest over wages. They did the same in January 2016 with municipal workers from La Plata, who were protesting a wave of severe layoffs. And on January 16th, state forces arrested Milagro Sala, an indigenous leader and parliamentarian in the Mercosur trade bloc, arguing that he had engaged in “incitement at the protest”. Amnesty International reported this arrest to the Inter-American Commission on Human Rights (IACHR) and the United Nations, and Eugenio Zaffaroni, ex-member of the Supreme Court and current member of the IACHR, characterized the arrest as “illegal” and an “international scandal”.

Although human rights criticisms have produced some changes, such as the president’s decision to eventually channel the Supreme Court appointments through Congress, the momentum towards closing political space continues. Even as he corrected the process for appointing judges, the president sanctioned an Action Protocol expanding the security forces’ authority to detain and use force against protesters.

Change has been a key word in Macri’s political discourse; he has promised massive economic shifts and ambitious infrastructure plans. But clawing back human rights processes, pushing through presidential decrees, overturning important media laws, devaluing the currency and enacting massive lay offs are not the kind of changes many Argentinians want. He may have won the election, but the people of Argentina are unlikely to tolerate Macri’s dismantling of the rights-respecting democracy they fought so hard to attain.

Alejandra Dandan is a journalist specializing in human rights. She writes for Pagina12, a national newspaper in Argentina.