The work of human rights organisations in the occupied Palestinian territories can never end abuses. Only a political solution that ends the Israeli occupation can do that. In the meantime, donors supporting Palestinian human rights work should reduce their bureaucratic demands.

In July, the 23-year-old nephew of a friend was released from an Israeli prison. The young man, a Palestinian journalist from a Bethlehem-area refugee camp, had been arrested at his uncle’s home in the middle of the night. After injuring several of his family members in their raid, Israeli soldiers took the young man away and beat him so badly he could barely walk. He was accused of inciting protests with his photography, and released from prison eleven days later after paying 1500 NIS (approximately $417) bail. 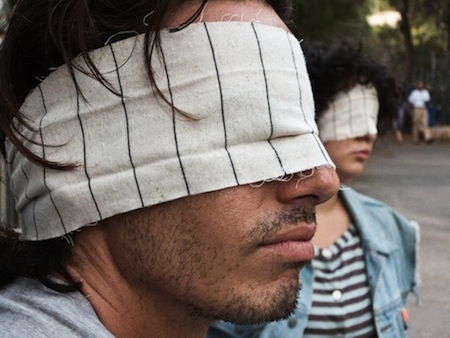 The eyes of human rights activist-actors are blindfolded as they protest alleged torture of Palestinian prisoners in Israeli interrogation facilities. Nir Alon/Demotix. All rights reserved.

Over the years, these organizations have developed great expertise in documenting all the ways that the Israeli occupation violates the rights of the 3.5 million Palestinians living in the occupied territories. They record how the occupation violates Palestinians’ rights to life, education, movement, economic development, the right not to be tortured. They analyze how the blockade of the Gaza Strip violates the right to movement of 1.5 million Palestinians living there, show how press freedoms are violated when Israel harasses Palestinian journalists like my friend’s nephew, and so on.

International donors, from Europe and beyond, donate millions of Euros every year so that Palestinian rights groups can continue their work. These organisations aim to ensure the implementation of international human rights and humanitarian law, and to advocate for Palestinians’ rights. Yet there is clearly no chance of these organisations preventing abuses by Israel until there is a political solution that ends the Israeli occupation.

Whereas rights advocacy elsewhere may pressure a government to respect its own laws, in Israel those laws are themselves fundamentally discriminatory. The violation of Palestinians’ rights is an inseparable feature of the occupation. The only sources of leverage over the Israeli authorities are Israeli voters, who do not prioritize Palestinian rights, and the international community of states and global business. Irrefutable evidence of the ongoing abuse of Palestinian rights has not been enough to convince these powers to penalize Israel in any significant way that might curtail abuses or end the occupation.

Donors believe their contributions may help end abuses against Palestinians. What they are really doing is funding an industry that provides employment in a place where there are very few opportunities for work.

Here’s how the industry works. Palestinian Human Rights Organisations (HROs) document violations, write reports, create advocacy materials, give legal aid to Palestinian political prisoners, provide human rights training for Palestinian security officers, promote “good governance” in the PA, and lecture children about their rights to education and leisure, among other activities. Palestinian HROs are specialists at analyzing all the ways that international humanitarian and human rights law forbid Israel’s confiscation of Palestinian land and water. They are practiced at issuing calls to the state signatories of the Fourth Geneva Convention to uphold their commitments, and they are adept at circulating videos that capture some of the many ways that Israeli settlers and soldiers wreak havoc, brutalizing Palestinian farmers and children.

At the same time, the donors funding this work demand other kinds of reporting and recording. They require reports with lists of outputs and impacts, such as how many publications were produced and educational pamphlets printed. HROs must chart the numbers of beneficiaries, how many people attended seminars or came to them to report a violation. No one seems to measure whether Israeli soldiers beat people less, whether settlers uproot fewer trees. Or, in relation to the Palestinian Authority (PA), whether security officers who attend human rights seminars implement those lessons in the field. Recent police brutality against protestors in Ramallah suggests not. As one HRO professional who lectured to PA security forces himself told me, rights training is often theoretical, disconnected from real practice. But so long as some “outputs” can be tallied, and some “beneficiaries” can be counted, the donors are satisfied.

Receiving and reading all these reports is such a big job that funders’ administrative demands have generated a whole new field of intermediary NGOs. These are entire organizations dedicated to HRO management, to which funders outsource their paperwork and to whom Palestinian HROs must answer. One HRO reported producing 114 separate reports for their funders in one year and spending more than $70,000 on “servicing donors” in order to meet their administrative demands.

This is one reason Palestinians have become cynical towards NGOs in general, many believing these organisations to be corrupt. And most have little hope that human rights organisations can improve things on the ground. People told me that they continue to report the abuses they have experienced to HROs because it is the only thing they can do. And similarly, many Palestinians working in HROs recognize their limited scope for ending abuses, especially by Israel. But they continue to do this work because it is, they believe, better than doing nothing.

The mountain of administrative work that donors demand of HROs is not the reason human rights violations continue. But surely no one can believe that $70,000 spent on quarterly reports is helping matters either. Donors’ proclivities for spreadsheets and statistics means that HRO workers end up spending more time on paper work than on working with people, or on developing long-term strategies for real social and political change.

In addition, most donors distribute their funding on a project-by-project basis. So to ensure organizational survival they must spend a significant amount of time figuring out what kinds of activities donors will fund and seeking out benefactors for the next project. And the next, and the next. HROs will always be dependent on the whims of donors, who designate their money for the flavor of the month violation. Before the second intifada began in 2000, land mine awareness was popular. During the intifada, “crisis intervention” projects for traumatized children were the thing to do. Suddenly everyone was painting children’s faces to cheer them up, handing out crayons for them to express themselves and “ventilate their feelings.”

All of these things can be important, effective ways to alleviate some of the effects of some of the occupation’s violence. But the piecemeal nature of donor largesse disperses focus and leads to dissipated energies. Diversifying funding sources would not solve these problems either. In any case, HROs are unlikely to attract funders among local philanthropists. Demands on their limited resources are huge, even for the wealthy businesspeople in Palestine and the diaspora who can contribute. They tend to direct their aid to emergency humanitarian relief during acute crises, or to development projects with more tangible results than rights advocacy can have.

Human rights funding should not be provided on a project-by-project basis, which requires NGOs to spend vast amounts of their time cobbling together grant proposals to submit here and there. It makes them more likely to be funder driven, preventing them from developing and pursuing their own broader vision. Funders should trust the people they work with more, reduce the bureaucracy and eliminate the box-ticking forms and reports. Donors might protest, citing the problems of corruption and inefficacy. But many of the attempts at imposing accountability can be meaningless anyway, since the kinds of things HROs are forced to count -- numbers of publications, numbers of beneficiaries, numbers of symposia delivered -- don’t reveal anything about actual impact or effect.

Funding should go to organizations in larger chunks and include support for infrastructure. It is almost impossible for NGOs to get money to pay for their buildings, so that they can have some stability and focus on long-term visions and planning.  For example, a group I work with wished to purchase land to create a park with green spaces, so that children’s “right to leisure” might actually be enacted. Not one of the tens of donor organizations that I approached was willing to donate. They don’t do infrastructure.

Despite the absurdities of this system, human rights funding should not end. So long as the occupation continues, the source of the abuses remains in place. HROs try to treat the symptoms, but cannot cure the disease. Although the hypocrisies of the human rights industry are clear, donors should not withdraw.

Although donors are doing little to stop the root cause of human rights violations, at least they provide work in a place facing extremely high unemployment levels (20.1 percent in the West Bank and 31.5 percent in the Gaza Strip in 2012). The economy is in shambles and will continue to be, so long as Israel controls when people can or cannot move outside their home territories; whether goods, building materials, and people can reach their destinations; and whether farmers can access their fields on the Israeli side of the separation barrier.

What should end is any funder trumpeting their aid as a means to curtail human rights violations. The reality is, only systemic political solutions can do that.

Lori Allen is Lecturer in the Department of Middle Eastern Studies, University of Cambridge. Her book, The Rise and Fall of Human Rights: Cynicism and Politics in Occupied Palestine (Stanford University Press, 2013), examines the history of human rights activism in the occupied Palestinian territories.