Haiti’s educational system routinely discriminates against those who don’t speak French—which is the vast majority of the population.

Teaching in local languages is important for children’s rights, anti-discrimination, quality education and equal opportunity for all. Yet Haiti stands out as one of the rare nations in which there is one single language spoken by all citizens, while the school system, by and large, does not use that language as the main language of instruction and examination.

In the 2010–2015 Operational Plan of the Ministry of National Education and Professional Training, the government announced, without any realistic means for implementation, the goal of “balanced bilingualism”—whereby the whole country would eventually become fluent in both French and Kreyòl. This seems like an insurmountable task, given that the country is mostly monolingual and suffers from extreme forms of economic impoverishment. Teachers themselves often do not speak French fluently, and most Haitians have no opportunity to be regularly immersed in any community that speaks fluent French, be it at home or at school—a situation that makes “balanced bilingualism” at a national scale a socially and economically costly pipe dream. 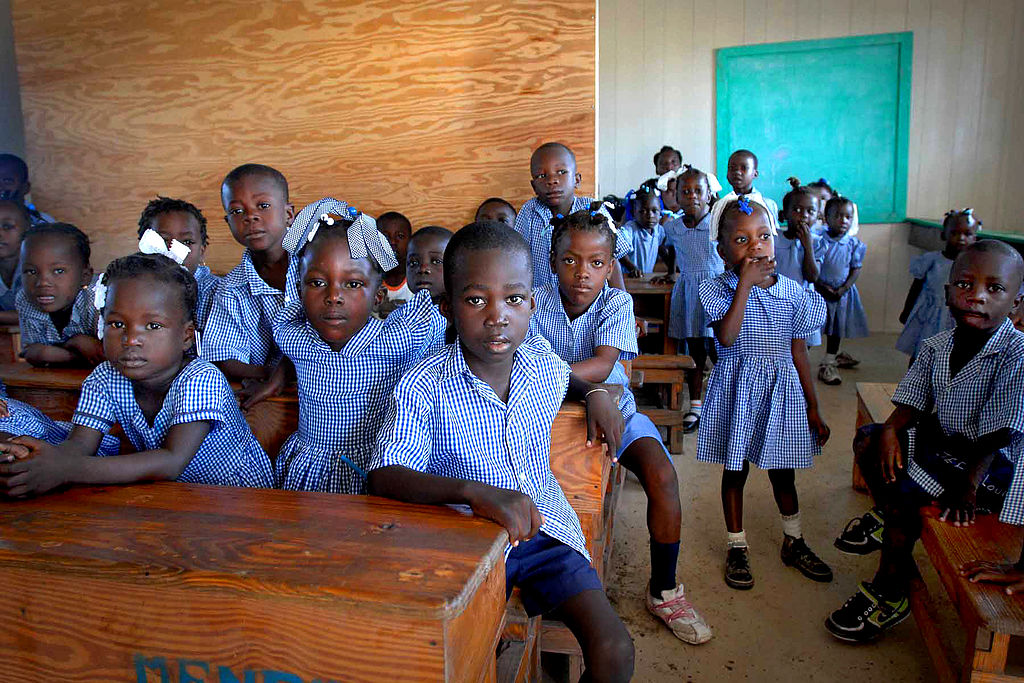 A classroom in the Artibonite department of Haiti. Throughout Haiti, education is mostly available in a language that the majority of children don’t speak.

Virtually every Haitian in Haiti speaks Creole (“Kreyòl”) as their native language, while no more than 10% speak French, perhaps as few as 3% if we only count those who speak fluent French. The systematic use of Kreyòl at all levels of education, administration, justice, etc., is therefore indispensable for ensuring equality of opportunity and non-discrimination among all Haitians. Using their native tongue is critical to provide the most sustainable and optimal foundations for investing in children (and adults), and to develop Haiti’s human capacity for problem solving and socio-economic development. This is the fundamental premise that underlies the workings of the MIT-Haiti Initiative, funded by the US National Foundation since 2012. By providing state-of-the-art teacher training and pedagogical resources in Kreyòl to faculty in Haiti, the Initiative is directly contributing to the Millennium Development Goals in Haiti—particularly the goal of quality education without discrimination.

Meanwhile, despite multiple plans and documents promoting the use of Kreyòl in education, Haitian schools continue to impose French as the primary language of instruction and examination. In many places in Haiti, official exams are not offered in Kreyòl. When students do have access to the exams in Kreyòl, many prefer to take the exam in French because they have already rote-memorized, with little if any comprehension, the corresponding materials in French. Typically students do not have access to a full range of books in Kreyòl, and especially not in science and mathematics at the more advanced levels.

In too many Haitian classrooms, students are still punished, humiliated, and even expelled for speaking Kreyòl at school. This practice of punishing children due to using their mother tongue interferes with their skills, creativity, and well-being. Among every ten children who enter the first grade, only one of them (10%) will finish school, as reported in 2011 by the State-sponsored Groupe de Travail sur l’Éducation et la Formation. Interestingly, approximately 10% of Haitians speak French to various degrees, in addition to Kreyòl. If this 10% substantially overlaps with the 10% that finish school, Haiti’s school system could indeed be playing a very powerful role in producing and re-producing socio-economic inequalities through exclusionary linguistic practices. All of these practices and lack of resources amount to systemic discrimination and violations of human rights—a type of “linguistic apartheid” that undermines the population’s mental health and sense of identity while blocking both academic progress and socio-economic development.

The successes of school systems in countries like Finland suggest that children are most successful at learning second languages, and almost everything else at school, when they have strong academic foundations, including literacy, in their home and community languages. From this perspective, literacy and other foundational academic skills in Kreyòl for Haitian school children is a necessary step for the learning of second languages such as French, English, or Spanish. This is exactly what works in successful Kreyòl-based education as in the Lekòl Kominotè Matènwa (LKM) in La Gonâve, which—thanks to funding from US institutions such as the National Science Foundation and World Vision—has now become a model for other schools in that area. The children at LKM read, on average, three times better than children in schools that still favor French-based education.

Clearly, the use of local vernacular languages in education worldwide has transformative potential. International organizations like the UN, alongside their Member States, should pay close attention to linguistic diversity as a means of promoting equal access to quality education and for protecting children’s rights worldwide. Organizations advocating for human rights should check whether government and international organization’s documentation and pedagogical materials (websites, social media, memos, syllabi, textbooks, examinations, etc.) are delivered in the corresponding local languages. Such monitoring could also provide longitudinal data to measure related progress in the use of local languages. All levels of human rights organizations should pay systematic attention to actual language and education practices on the ground.

In Haiti, for example, the vast majority of administrative, legal and educational documents are still written exclusively in French—including documents being produced by the very organizations whose official objectives include the promotion of children’s rights and education. One UNICEF  site, titled “Timoun yo! The Voice of Haiti’s Children”, is a perfect example: the site’s home page prominently displays the UN Convention on the Rights of Child, but the site itself is in French and English and not in Kreyòl—the only language spoken by most Haitian children (and adults). In addition, publications in most Haitian state offices, including the Ministry of National Education, the State University, and human rights institutions such as the Office de la Protection du Citoyen, routinely violate Haiti’s 1987 Constitution, which mandates the use of French and Kreyòl as co-official languages, with Kreyòl deemed the one single language that bonds the entire nation. In effect, such linguistic practices exclude the majority of the population.

Before the MIT-Haiti Initiative began, there were no Kreyòl-language online materials and digital learning tools for university-level science and mathematics. The Initiative now provides resources that will help spread science and mathematics in Kreyòl indiscriminately, thus joining the still too small number of organizations that promote quality education in Haiti’s national language. Since 2012, the Initiative has also provided teaching-training workshops to enhance high school and university teachers’ skills in active-learning pedagogy based on Kreyòl and in hands-on technology for education.  In order to succeed, this paradigm shift requires the participation of  local and international institutions—governments and courts, schools and universities, telecommunication companies, funding agencies and NGOs—which can help us change old prejudices that have, for far too long, excluded Kreyòl from institutions and activities that create and transmit knowledge and power. This is how we can chart a more progressive course towards quality education and equal opportunity for all, in Haiti and beyond.

Michel DeGraff is a linguist at MIT where he focuses on syntax, on creolization as a case of language change and on the role of language in educational rights. He is also the Director of the MIT-Haiti Initiative, the LSA Representative to the AAAS Science & Human Rights Coalition and a founding member of the Haitian Creole Academy (“Akademi Kreyòl Ayisyen”).