Advanced economies are also experiencing persistent and increasing inequality, and its effect on human rights is alarming.

The publication of Thomas Piketty’s Capital in the 21st Century heralded a new age of engagement with the problem of inequality. Unlike previous work on inequality, Piketty turned his economic gaze away from developing countries and focused instead on patterns of income and wealth concentration in the developed economies of the United States and Europe. He argues that inequality matters for the long-term economic health of countries. But what about the consequences of inequality that reach beyond the economy?

Though Philip Alston argues that extreme inequality is the very antithesis of human rights, one strand in economic theory has long argued that some inequality is not only good, but also necessary for development: concentration of income provides the needed capital for investment in businesses and jobs. This line of argument also holds that a period of increasing inequality is temporary and will ease with time as a country develops, and subsequently, income distribution becomes more equal.  This argument and the policies that supported it characterised much of development economics from the 1970s and the so-called “Washington Consensus” on the need for developing countries to allow price mechanisms to allocate resources in their economies.

The period of so-called Reaganomics or “voodoo” economics (a la Ferris Bueller’s Day Off) in the 1980s took this argument and applied it to already developed economies such as the US and the UK, where marginal tax rates were slashed and the promise of “trickle down” benefits would create new businesses and jobs.  Analysis of tax returns data, long-term income and wealth data, and new data visualisation on income inequality in the United States shows that the policies set out in the Reagan period have by and large continued, and that income inequality is now much worse than in the years just before the Great Depression. Remarkably, the top quintile of wealthy Americans own 84% of all income, a figure that is not dissimilar to those found in the other advanced economies analysed by Piketty, and a figure that remains largely unknown to most Americans.

As America is in an election year, the topic of inequality is at the forefront of the campaign. Bernie Sanders has made it a pillar of his campaign and seeks redress through a new programme of redistribution that harks back to the days of FDR, while Hillary Clinton speaks of “breaking down barriers” that have held the middle and working classes back from a decent and expected lifestyle. Republicans are not addressing the issue as openly as the Democrats, but late last summer, Donald Trump claimed that wealthy Americans would need to pay more tax, while middle class Americans should have a tax cut.

High levels of income and land inequality are related to high levels in the violation of personal integrity rights.

How does this rising and persistent inequality in advanced economies affect the protection of human rights? As Radhika Balakrishnan and James Heintz noted earlier in this debate, inequality threatens all rights, not just economic and social rights. In 2009, Marco Larizza (now at the World Bank) and I published a study in International Studies Quarterly, which showed that high levels of income and land inequality are related to high levels in the violation of personal integrity rights.  Our paper was inspired by patterns of inequality and human rights abuse observed in the case of Brazil, which we then generalised across a pooled cross-section time-series data set of 162 countries for the period 1980 to 2004. Our argument centred on the micro-foundations for inequality in which the “haves” in society have incentives to maintain the status quo. They welcome government polices that maintain control of the resources that they have and prevent access for those “have nots” in society—prevention policies that may well include the violation of human rights.

In addition to the statistically significant relationship between inequality and human rights that we found, we argued further that the marginal effects of inequality are quite substantial both in absolute terms and relative to the other factors that we considered (e.g., democracy, ethnic fragmentation, domestic conflict, population size and economic development). In other words, redistribution of income can lead to improvements in the protection of human rights. Conversely, an increase in inequality can lead to a decrease in the protection of human rights. 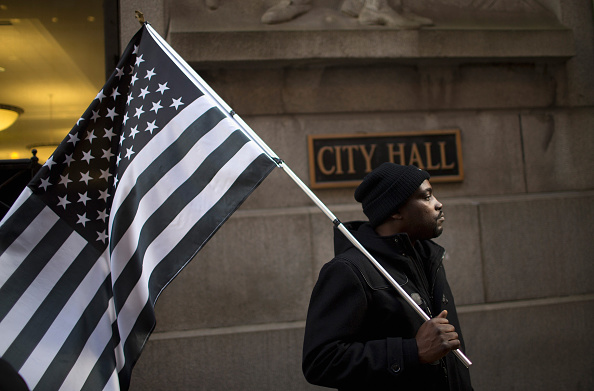 In the United States, demonstrators gather outside City Hall in Chicago, Illinois to protest shootings by police officers.

Just as the problem of inequality has now travelled to the developed world, I am increasingly concerned that its relationship with the violation of human rights has also arrived. It is less common to speak of human rights abuse in the United States and other advanced industrial countries (for an exception see Foweraker and Krznaric) but consider a few stylised facts that sit alongside those already known about the increase in income inequality. The US has the highest incarceration rates in the world as a proportion of its total population (>700 per 100,000 people), where the increase in rates over time maps precisely the rise in income inequality. Over the last 40 years the total prison population has quintupled. Prison sentences in themselves are not human rights violations, but it is telling that policy changes that have led to the increase in incarceration rates (and not an increase in crime rates) coincide with policy changes that have led to concentrations of income.

Alongside the rising rate of incarceration, there has also been an increase in the number of police killings in the United States an increase in arrest-related deaths, and increasing concern over the militarization of US police forces. More worryingly, across both measures of incarceration and police killings, secondary analysis also shows that a disproportionate number of prisoners and victims of police shootings are African American, while data for 2015 confirm that the pattern of disproportionate killing continues unabated.

The consequences of inequality are not just confined to the economic realm. As resources become more and more concentrated in the hands of the few, there are strong incentives for those in positions of societal and governmental power to maintain the status quo. Mobilization against such measures and social dislocations that result from them are met with greater incarceration, greater firepower, and sadly, more state violence against those that are most marginalised in society. The lessons of Piketty are clear for the economy, but we must also remain mindful of the human rights consequences of inequality, and work to mitigate its worst effects.