Activism against environmental exploitation in Ecuador requires going up against titanic powers, and legal empowerment has helped indigenous groups do just that. 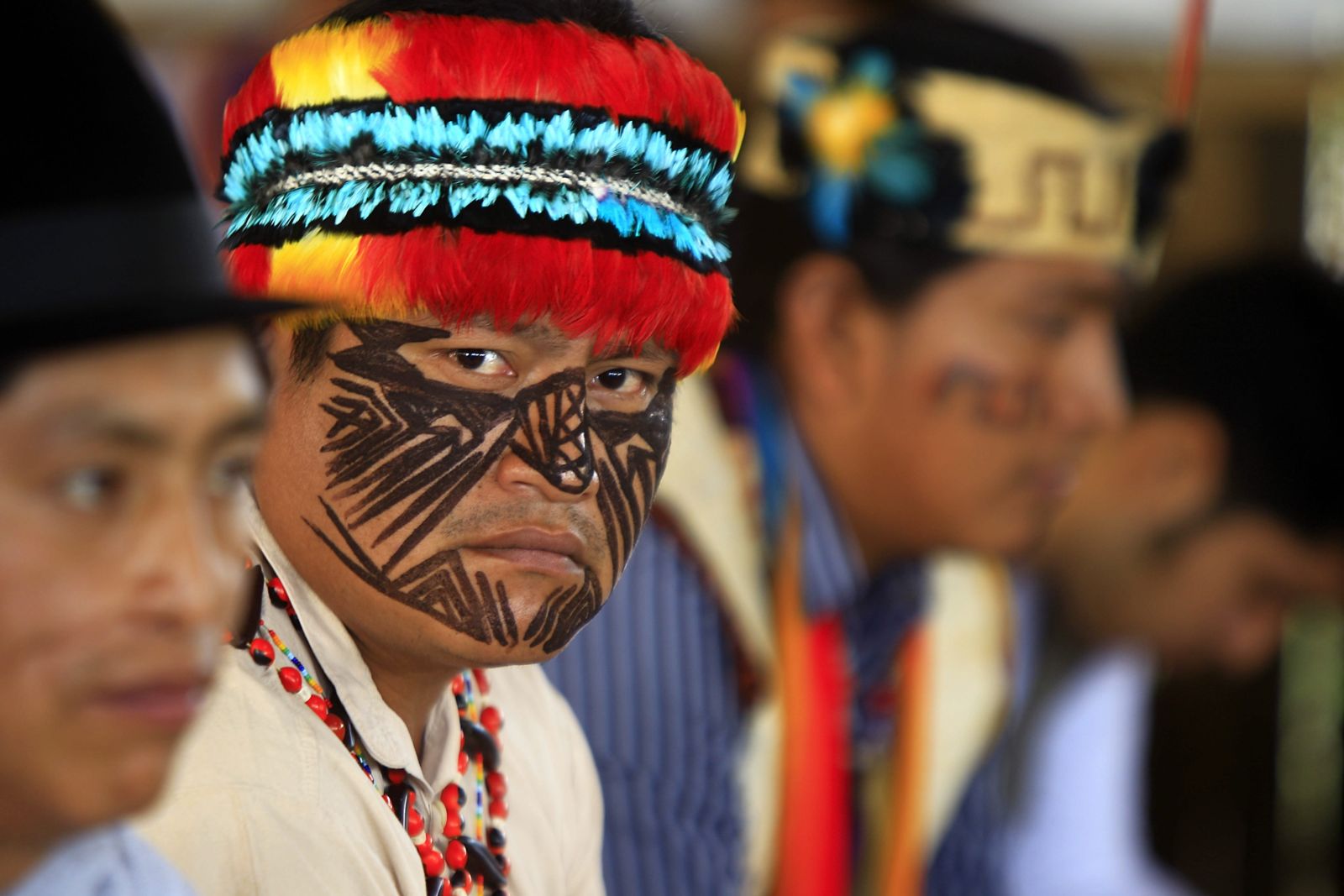 In Ecuador, more than one million people recognize themselves as indigenous.

Environmental conflicts that hinge upon extracting natural resources from local communities—who ­­regularly bear the negative effects of such activities—are rising all over the world. The problem is most acute in countries of the global South, which are rich not only in commodities but also in cultures and biodiversity. Ecuador is a prime example, and the ongoing health of Ecuador’s environment is mostly due to the assiduous agency of indigenous peoples of the Amazonian region—made possible by increasing civil society efforts on legal empowerment.

In Ecuador, more than one million people recognize themselves as indigenous, a social collective of 14 different nationalities, with 10 of these located along the Amazonian provinces, where most of the extraction companies are operating or plan to do so. Ecuador's main export commodity is oil, representing about 35% of the state's general budget, and whose robust prices during the last decade raised Ecuador's GDP by 4.3%. This economic stimulus generated further expansion of the extractive industry, not only in terms of moving into unexploited Amazonian territories, but also in developing new extractive industries such as large-scale mining.

For example, the government announced in 2011 a plan to open three million hectares of well-preserved rainforest to new oil drilling, a manoeuvre that affected the territories of seven indigenous nationalities. Also, the National Assembly passed a mining law in 2009, paving the way for industrial mining for the first time; again, most of these resources lay in indigenous territory.

These plans, of course, have strong geopolitical underpinnings. China plans to invest at least $250 billion in Latin America over the next decade, and Ecuador, after having drained the trust of other creditors, has accumulated a debt with China of more than 8 billion USD, much of which must be paid with oil. As a result, Chinese companies were recently granted several concessions without fulfilling fundamental rights requirements, such as having properly consulted with local communities under international and constitutional standards.

To fight back against these expansions, indigenous organizations of the Amazon region, in coordination with CONAIE—the national indigenous organization—have intensified their battle for dignity and respect. But resisting the titanic powers behind many foreign investments is formidable, and as activists we must meticulously choose our tools based on a careful analysis of the political and economic national phenomena. For instance, indigenous families have been forcefully displaced from their homes for merely living inside the mining concessions; prominent indigenous leaders have been criminalized for protesting against some of those projects; and indigenous organizations have been denied their legal recognition for standing by their principles of territorial integrity. Fundación Pachamama itself was shut down by former president Rafael Correa—a populist leader known for his repression of civil society—during one of his addresses to the nation on live television. That episode propelled the creation of Terra Mater to continue the foundation’s work.

Because of this political climate, Fundación Pachamama and Terra Mater have always resorted to legal empowerment as a powerful tool that enables local communities to deeply understand and strategically make use of the law to galvanize positive change, especially when employed as a complement to the historical trajectory of the indigenous movement. In Ecuador, however, working in legal empowerment is not without its challenges, particularly when the ordinary judicial system has questionable impartiality and independence in politically sensitive cases, including those related to big extractive projects. That is why we went beyond the borders to use regional and international human rights mechanisms to denounce both China and Ecuador.

In Ecuador, however, working in legal empowerment is not without its challenges, particularly when the ordinary judicial system has questionable impartiality and independence in politically sensitive cases, including those related to big extractive projects".

In that realm, we envisaged the opportunity for indigenous leaders to harness the power of international law for the protection of indigenous rights, to bring about legal and policy change at the local level. We believed it was time the United Nations welcomed local indigenous leaders so they can convey with their own voices, the message of the forests.

The first thing we agreed upon was to collectively document rights abuses. Secondly, we funded local assemblies so that leaders could gather testimonies from members of the communities to build diversely solid arguments. We then identified the relevant UN mechanisms and delineated an advocacy strategy accordingly. For instance, in 2016, we decided that it was key to attend a Human Rights Council session in Geneva with a two-folded objective: approach the Special Rapporteur on Environment and Human Rights who was about to submit his thematic report, and discuss with stakeholders the best strategies to effectively participate in the Universal Periodic Review (UPR). We travelled with Manari Ushigua, the former president of the Sapara Nation, so he could share his personal human rights story of a Chinese-led oil project that had the potential to destroy his territory.

Upon our arrival, and considering Ecuador’s upcoming UPR, we co-convened workshops alongside human rights organizations and indigenous leaders, on the process of the UPR and how to persuade other states to formulate relevant recommendations to Ecuador on indigenous rights. Again, we collectively prepared the reports and trained leaders from several nationalities, including Shuar, Waorani and Kichwa, on communicating the core messages to the diplomats, both at the embassies in Ecuador and in Geneva.

Finally, the president of CONAIE, the president of the Waoranis Women, the communications leader of CONAIE and the president’s delegate of the Pueblo Shuar Arutam arrived at the UN headquarters in Geneva and engaged in the whole process of the UPR, transmitting with their own voices all the human rights abuses both Ecuador and China were committing. In the end, an important number of states echoed their claims through recommendations to Ecuador, including the need to protect indigenous leaders from harassment and criminalization. Also, several Special Rapporteurs sent communications to the Ecuadorian government indicating their concerns about the situation.

After all this international advocacy work rooted in legal empowerment, we finally began to see some changes. For example, the Ecuadorean government repealed an executive decree that restricted the work of both NGOs and indigenous organizations, and the state granted legal recognition to indigenous local organizations and promised to fully protect indigenous rights in future concessions. Finally, last year the state reopened Fundación Pachamama. Obviously, the above mentioned positive changes should not be entirely attributed to the international strategy, but it was a key feature of a more robust and structured strategy designed by the indigenous movement, which included demonstrations, social media activism, congress lobbying, and litigation, among other tools.

The lesson I humbly shared with practitioners and researchers at the Reimagining Justice conference who are using legal empowerment to promote human rights globally, is not to approach a local community in a vacuum. As activists, we must deeply understand the political, economic and cultural context of the country and its influence within the community. We must submerge ourselves into the dynamics of life that bring epistemological value to the collective tissue. Only then, can we wisely select the correct tools and strategies with the people to create effective change.