Human rights organizations and funders in Latin America need to rethink how they protect  defenders in light of increasing threats from non-state actors and impunity encouraged by the state.

Beyond the tragic stories and shocking statistics of environmental and human rights defenders attacked and killed in Mesoamerica lies an increasingly complex reality and profound challenge: how can activists better protect themselves when faced with threats and violence from shadowy actors and a complicit state? This was the exam question before a group of defenders, donors and international organisations convened in Mexico City in January 2017 by the Fund for Global Human Rights and JASS (Just Associates).

Our reflections, captured in a short film and report  here, led us to the need for a deeper analysis of power, gender and race—of the actors and structures that perpetuate this violence. As donors and protection organisations, our homework is to orient our technical support and funding to the community-led, collective protection strategies that defenders feel are more effective in their context. The task facing defenders in the region is articulated below by Honduran defender, Padre Melo, of the Equipo de Reflexión, Investigación y Comunicación (ERIC), and in interviews (available in Spanish with English transcript) with Claudia Samayoa (UDEFEGUA, Guatemala), Miriam Miranda (OFRANEH, Honduras) and Abel Herrera (CDHM Tlachinollan, Mexico).

Defending human rights is an uncomfortable and high-risk adventure in societies where state institutions are no longer based on the rule of law, but on the power and caprices of the powerful.Human rights defenders are at a serious disadvantage in this context. Our voices and work become weaker in an environment where those who hold power impose their own overwhelming “truth”. These risks increase when contentious issues are addressed: the protection or demand for land; the protection of natural goods, health, education; or a fiscal policy based on income, rents, and property. Once human rights advocates expose violations or defend the rights of people that are threatened, they are likely to be at risk. 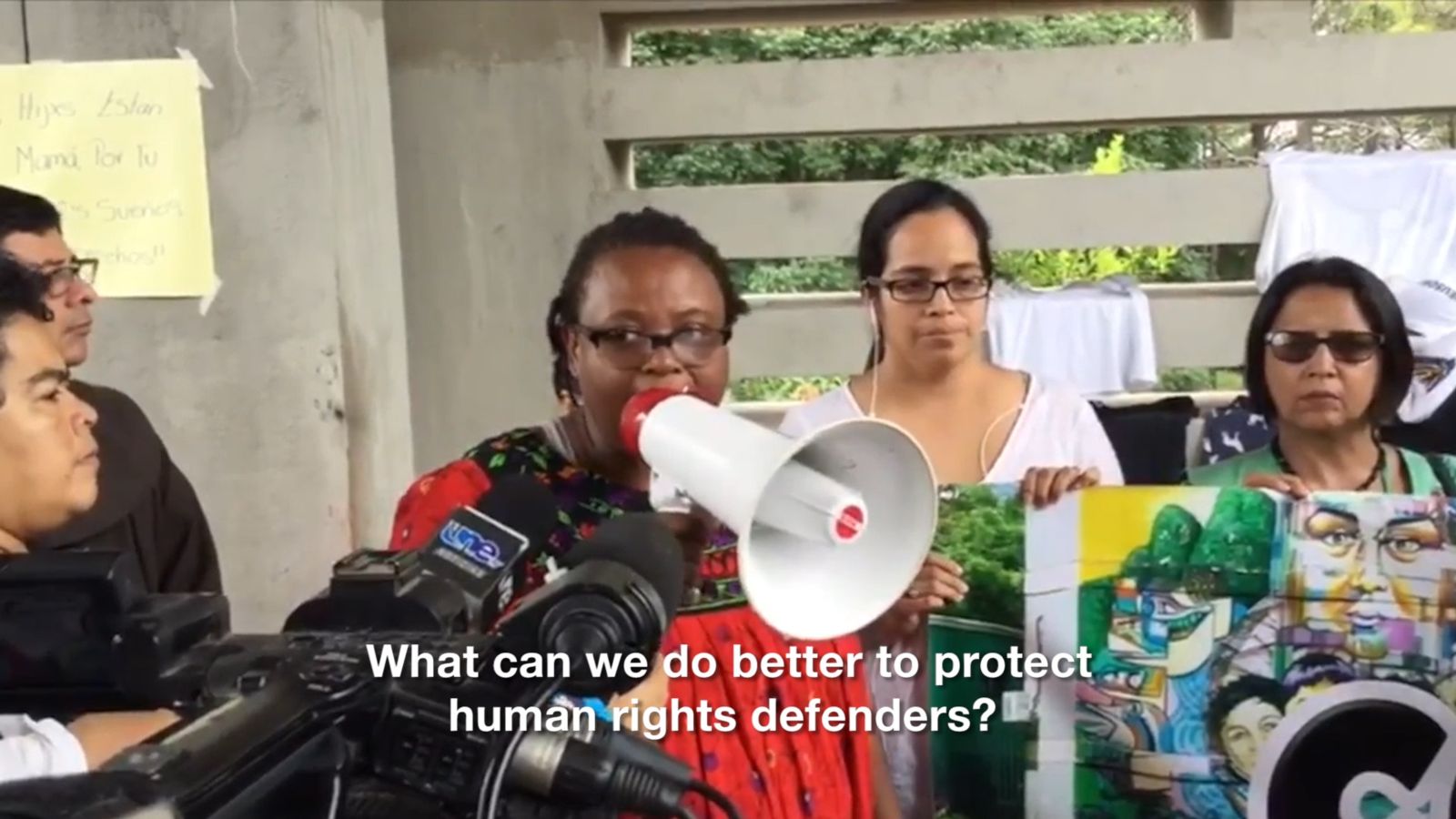 Miriam Miranda, general coordinator of OFRANEH, at a press conference on the university student movement in Honduras.

There is a common pattern of four stages of repercussions through which a human rights defender may go through in the oppressive environments of many Latin American countries:

First, the human rights defender is ignored. Nobody will listen, answer, interview or pay attention to the human rights advocate, as if they did not even exist. Their actions pass unnoticed. Second, the advocate is defamed. When their efforts cannot be hidden or ignored any longer, the media—particularly government control media—will publicize what is being done but will misrepresent the advocate’s work, labeling them as an agitator, an opponent to development, a violent and socially unfit person, or a terrorist. This defamation influences ordinary and ill-informed people to see that rights defender as an enemy or a threat. The third stage is criminalization. The laws of the powerful operate to charge and bring the defender to the courts, sentencing them to frighten others. The fourth and most extreme stage is physically eliminating the person—outright murder—but often through means that make it seem an ordinary crime, or a crime of passion, not related to the person’s work as a human rights defender.

These deaths of and threats to human rights defenders today are clear and egregious political crimes. Not all threats and murders result from a direct order of a high public official, but when the state encourages the impunity of those who act against the human rights advocates, it is culpable.

People who exercise authority through the state are usually identifiable: a policeman, a logger, an agribusiness tycoon, a member of parliament, a mayor, the owner of a media company, a businessperson, a rancher, a politician, or a drug dealer. They are all clothed in the shadow of illegality and transit in the corridors of legality and official institutions. Most of them have a tourist visa to enter and leave the United States; many are preeminent politicians or businesspeople, and frequent guests at the July 4th Independence party of the American embassy.

How do we protect people who defend human rights? For decades, states in Central America have approved mechanisms that protect advocates; considering the law only, Mesoamerican states should be considered defenders of human rights themselves. Although one should always appeal to these instruments, states are incapable of complying with these laws and mechanisms if their role is to protect the powerful in society.

The only alternative, then, is that the protection of advocates depends on themselves -particularly through community and collective protection - and on their ability to evaluate their surroundings, to build alliances and to give their work a political dimension. From this angle, there are a few key tasks for human rights organizations to tackle:

First, organizations must break up with the prevailing paradigm that waits for rich and wealthy countries to make decisions. Rights defenders need to position themselves against patriarchy and other dominant power structures and argue against the idea that power is only available to the strong. It is very difficult to expect transformation from human rights defenders if they negotiate with this dominant paradigm. Instead, organizations must build a new paradigm based on horizontal relations and understanding power as a quest for significant changes in people and their environment, based on autonomous decisions and on new gender relations.

Second, human rights defenders and their organizations must have a thorough understanding of the local context and its players, scenarios, power relations, trends, and opportunities. This understanding also needs to take into consideration national, Mesoamerican and international scenarios. The context is dynamic and always moving: an organization that defends human rights has to be constantly informed of circumstances and aware that facts are not isolated, but intimately intertwined.

Third, organizations must identify positive energies within the organization and sister organizations—qualities that inspire confidence in the triumph of justice and peace—in order to strengthen them and enable them to face external threats.

Fourth, human rights defenders must build alliances with other organizations. We all need each other, we all contribute, we all learn and we all have abilities that can be shared. No alliance can come from the competition and mistrust that is raised when certain organizations believe to be superior to others and seek to impose their views and interests.

Fifth, organizations must seek alliances with social players—such as small/medium businesses, academics, and urban/rural producers—that do not share the same circles or commitments but do share the will to promote the rule of law and a social and economic model that is inclusive and democratic. They must push forward national and Mesoamerican forums where a basic consensus about democracy, the rule of law and sovereignty can be achieved so that they can contribute to our organizations that defend human rights and allow them to develop a wide political dimension.

Last, but certainly not least, human rights defenders must learn to spread joy to organizations and the victims of abuse perpetrated by the powerful. An expression of defeat appears when we are overwhelmed by sadness, bitterness, and anger. When this happens, our opponents have already won the battle because they have robbed us of our joy. Promoting playful spaces and recovering the meaning of celebration are primordial tasks and conditions to win the battle against the state of the powerful.

Rev. Ismael Moreno Coto, S.J., known as 'Padre Melo', is a human rights defender from Honduras where he is director of Radio Progreso and of ERIC - Equipo de Reflexion, Investigacion y Comunicacion (the Team for Reflection, Research and Communication) which litigate cases of human rights violations before national and international courts and conduct research, trainings, and strategic communication through community radio and printed materials on the human rights situation in Honduras.