Even where civil society space is constrained, local organisations can create positive relationships with state and external actors.

On 27 June the UN Human Rights Council adopted a resolution on protecting civil society space. This move is extremely welcome, particularly with the latest CIVICUS State of Civil Society Report that again emphasises the growing threat to civic freedom worldwide. But my eye was immediately drawn to the list of voting countries that abstained or rejected the Resolution: Russia, Kyrgyzstan, Kenya, Ethiopia, South Africa and Nigeria to name a few. They include countries where civil society is under pressure through restrictive regulations or other forms of repression, so the voting patterns may not seem surprising.

These are also countries where the credibility and sustainability of many civil society organisations (CSOs) that traditionally have been funded by external sources is in doubt. Shifting aid patterns are part of this, but as funding sources change other problems are exposed, including internal weaknesses and disconnection from communities and citizens. Other authors have made important points on the issue of civil society funding: Edwin Rekosh discusses alternative business models, Jenny Hodgson talks about the imperative of local funding, while Hussein Baoumi addresses the limitations of local philanthropy.

Many organisations have been ill prepared to cope with this serious moment of disruption.

Ultimately we are witnessing a confluence of factors affecting the sustainability of different aspects of civil society (its organisations, actors and actions) in different places in different ways. A group of scholars and practitioners explored this in a recent issue of Development in Practice. We find that many organisations—at local, national and international levels—have been ill prepared to cope with this serious moment of disruption.

However, the list of abstentions and rejections includes countries where INTRAC has been working with local CSOs—with funding from external actors—to improve their practices and advance their missions. This has often involved working with government officials at sub-national levels. Does this mean that civic space in these places is not as closed as we might think?

Take Kyrgyzstan and Tajikistan, where we have managed to get local government officials involved in joint research and reflection on social and economic issues with representatives of local NGOs. This work often touches closely on governance questions, but it is done in ways and within spaces that can produce mutual respect and trust. For example, between 2012 and 2015, we helped CSOs in four cities across southern Kyrgyzstan and Tajikistan to carry out research and initiatives on youth employment, identified as a root cause of conflict in the Fergana Valley. Local officials participated in a Community of Practice (i.e., a group of people who share a profession or craft) throughout the project. Over 2015-16 we supported local trainers to build capacity of civil society actors in poorer areas of Kyrgyzstan. Officials took part in events and showed a genuine interest in the roles that civil society can play in these regions, including giving funds and political support to new social enterprises set up within the project. We always work with facilitators and consultants who are local, but these initiatives are funded by external actors.

Ethiopia is another example, where the Civil Society Support Programme—funded by a number of external donor agencies and involving international consultants and trainers—has provided small grants and capacity development initiatives to over 500 local organisations. The programme found that emphasising support for “hard to reach populations” provided a common focus and language that government representatives and CSOs could agree on. There are signs that this has helped build trust and led to more positive collaboration between government and CSOs. In Kenya, the Kenyan Community Development Fund and other national organisations have been identifying ways to strengthen civil society from within, while improving relationships with decentralised authorities and the private sector. In Nigeria, the State Accountability & Voice Initiative (SAVI) programme used political economy approaches to identify issues that might have traction with a variety of stakeholders, and then helped CSOs to engage with the media and state level policy-makers on common agendas for change. 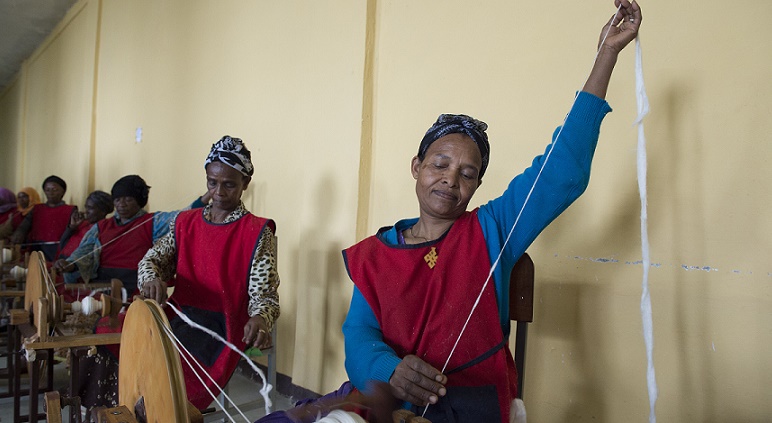 Women receive weaving training from an NGO in Addis Ababa. In Ethiopia, over 500 local groups have been supported through the provision of small grants and capacity development initiatives.

These initiatives are often small-scale and might not appear to have immediate or widespread impact in the grand scheme of global issues. They aren’t revolutionary, overtly disrupting or threatening entrenched political elites and systems. They are often based on well-established capacity-building approaches. They are essentially about organisations having agency to find their own ways to navigate space to bring about localised change. This is about prying open small spaces in which relationships of trust can be formed where lines between political, civil and private spaces are very blurred. It is a long-term approach that contributes to social and civic awareness-raising, and to convincing people throughout society of the value of civil society.

Our experience calls for more nuance in the debate on closing space. The recent conference of the International Society for Third Sector Research featured numerous panels, papers and round table debates on aspects of civil society space, including foreign funding, civil society sustainability and democracy interventions. Many presented new evidence on the all-too-familiar story of closing space. But there were also valuable contributions on the numerous places where civil society is “stretching” a space that evolves constantly and requests for more evidence from the ground about how organisations are coping in practice.

Head-on campaigns and global movements in defence of civil space are important, but tackling closing space head-on can also backfire for local activists and human rights defenders. There are creative ways that local organisations are building trust and navigating spaces in ways that work for them, including with foreign funding and external support. We need to bring this evidence to the fore and explore the options for scaling up initiatives that appear to work without destroying the fragile relationships between civil society and government, or the credibility of the CSOs involved.

Funders of civil society need to think much more creatively about how they support organisations in ways that enhance their long-term viability, credibility and sustainability, and help them to navigate the regulatory frameworks and political environments that surround them. Spaces that appear closed may still have cracks wide enough for civil society to make gains. Indeed, moments of disruption can also represent opportunities to do things differently going forward.

Rachel Hayman is Head of Research at INTRAC, a UK-based not-for-profit organisation that works to strengthen civil society organisations worldwide.