The intervention of the ICC in some countries has many effects, but little impact on promoting real accountability – and at times working against that goal.

One of the greatest expectations attending the creation of the International Criminal Court has been that the ICC will contribute to ending impunity not only by prosecuting international crimes, but also by inspiring, encouraging or even pressuring domestic justice systems to do the same. This expectation is tied to what has been called the ‘cornerstone’ of the Rome Statute that creates and governs the ICC: the principle of complementarity.

As set forth in article 17 of the Statute, complementarity dictates that the Court may exercise its jurisdiction over a case only if it is not being, or has not been, genuinely investigated or prosecuted by a state. It was widely expected that states would avoid ICC scrutiny by making use of this primary right to investigate and prosecute and, in order to do so, reform their domestic justice systems. The reforms and domestic proceedings would demonstrate complementarity’s catalysing effect.

Reviewing developments in two states where the ICC has opened investigations, Uganda and Sudan, we see that some of the widely expected effects have occurred: international crimes were incorporated into domestic law, even in Sudan, a state not party to the Rome Statute. Domestic courts specialising in international crimes proliferated.

Some less predicted effects appeared, too. Adultery—where committed ‘within the framework of a methodical direct and widespread attack’—was included in the list of crimes against humanity. Domestic courts specialising in international crimes mimicked the Court not just in subject-matter jurisdiction, but in other ways too: they budgeted for long trials; put prosecutors, judges and a registrar in one building; and directed most attention not locally, but to an international audience composed of donors and international NGOs. The transitional justice economy boomed, funded by donors and international NGOs that followed in the ICC’s wake. The language of ‘international standards’ became a fetish, sometimes because these offered more discretion than stricter domestic rules, for instance on evidence. And rebel movements demanded accountability instead of amnesty, realising this was the only way to end ICC involvement on grounds of complementarity.

But the ICC also catalysed processes that went against encouraging domestic proceedings: states outsourced the responsibility for investigations and prosecutions to the ICC; mediators took the topic of accountability off the peace-talks agenda because the ICC was already dealing with the issue; and local human rights activists’ operational space was reduced because they were seen as associated with the ICC, rendering the domestic promotion of international norms more difficult.

Notably, the one and only effect that is directly relevant for an invocation of complementarity before the Court, namely the initiation of genuine domestic investigations and prosecutions of international crimes, is for the most part yet to occur in Uganda and Sudan. 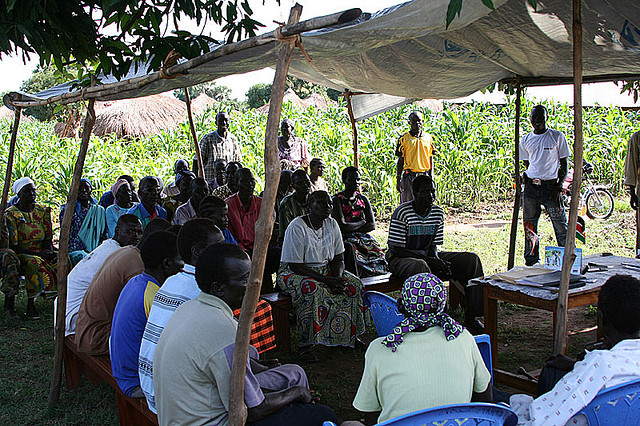 A property rights hearing in Yei, Sudan. How does the ICC affect the domestic justice system in countries where it opens investigations?

Tracing the processes that led to these mixed results, we find several developments that are relevant beyond Uganda or Sudan.

However, writers, diplomats, activists and legal practitioners have also conceptualised complementarity as a ‘big idea’ that entails more than this. For instance, it has been argued that complementarity, or the Statute more generally, prohibits states from issuing amnesties for crimes within the Court’s jurisdiction, even though the Statute is in fact silent on amnesties. Even more commonly, it has been argued that the complementarity scheme reflects not just a state’s primary right to investigate and prosecute crimes within the ICC’s jurisdiction, but also its ‘primary duty’ to do so. Some advocates have gone even further, arguing that complementarity entails a responsibility not just to investigate and prosecute as such, but also to investigate or prosecute the same international crimes (as opposed to ordinary crimes) and in the same manner in terms of procedure (for instance, victim participation) and punishments (no death penalty) as the ICC. They have argued that states are therefore under an obligation to adopt ‘implementing legislation’ to criminalise the crimes within the ICC’s jurisdiction in their domestic law. NGOs and others making these arguments are thus influencing complementarity’s catalysing effect by ascribing a meaning to complementarity that differs from that in the Statute.

Secondly, whilst effects such as references by national actors to international concepts such as ‘transitional justice’ or ‘international standards’ may be music to the ears of international donors, they do not necessarily sound the same in domestic practices and beliefs. Moreover, since the absence of special international crimes legislation or specialised courts was never the cause of the impunity problem in Uganda and Sudan—there were other laws under which, and courts in which, suspects of international crimes could have been tried—their adoption and creation are not its solution either.

This leads to the third point, namely that complementarity has insufficiently affected states’ cost-benefit analyses to bring about a catalysing effect on domestic investigations and prosecutions. On the one hand, the obstacles to domestic proceedings are more ingrained than problems such as the absence of laws, courts or ‘capacity’—the areas that international assistance programmes focus on under the banner of ‘positive complementarity’. Instead, a key obstacle is the reality of state institutions’ being subordinated to patronage systems. Neither ICC intervention nor complementarity reduces the often-insuperable loyalty costs that domestic proceedings would incur.

On the other hand, the states concerned have not considered the ICC proceedings as sufficiently damaging to their sovereignty or international reputation to encourage domestic proceedings—indeed, some states have considered (partial) ICC intervention as beneficial. Even if considered high, the costs of ICC intervention can be avoided by means other than conducting domestic proceedings, particularly because of the ICC’s greatest handicap: its lack of enforcement powers.

One of the key causes of impunity, and thus reasons for ICC intervention, is the cycle of impunity that results from patronage networks.

The ICC’s lack of enforcement powers leads to a paradox. One of the key causes of impunity, and thus reasons for ICC intervention, is the cycle of impunity that results from patronage networks: ruling parties do not amputate the hands that vote in its favour, whether in elections or by demonstrating other forms of loyalty. However, because the ICC is for its part dependent on cooperation with states, it is itself embedded in a de facto patronage network; to some extent it accepts impunity with respect to the national or international powers on whose cooperation it depends, in order to achieve accountability for others. In other words, it is not just states but sometimes the Court that is unable or unwilling to pursue criminal justice. This political reality ought to be acknowledged, and taken by the Court as its explicit starting point, both for the definition of its own success and for its evaluation of admissibility.

Perhaps complementarity’s catalysing effect is stronger in states where the ICC has not (yet) intervened. But it is especially in states where the Court has intervened that such an effect is needed: it is there that there are reasonable grounds to believe that international crimes have been committed and that domestic justice systems are struggling. Addressing impunity thus requires more, or indeed, other things, than ICC intervention, the adoption of laws, the creation of special courts or the training of local lawyers. Only if we begin to analyse impunity, domestically and internationally, as much as a political problem as a legal one can we begin to explore ways to tackle it.

Sarah Nouwen is a Lecturer in Law at the University of Cambridge, a Fellow of the Lauterpacht Centre for International Law and of Pembroke College, Cambridge, and author of Complementarity in the Line of Fire: The Catalysing Effect of the International Criminal Court in Uganda and Sudan (Cambridge University Press, 2013).