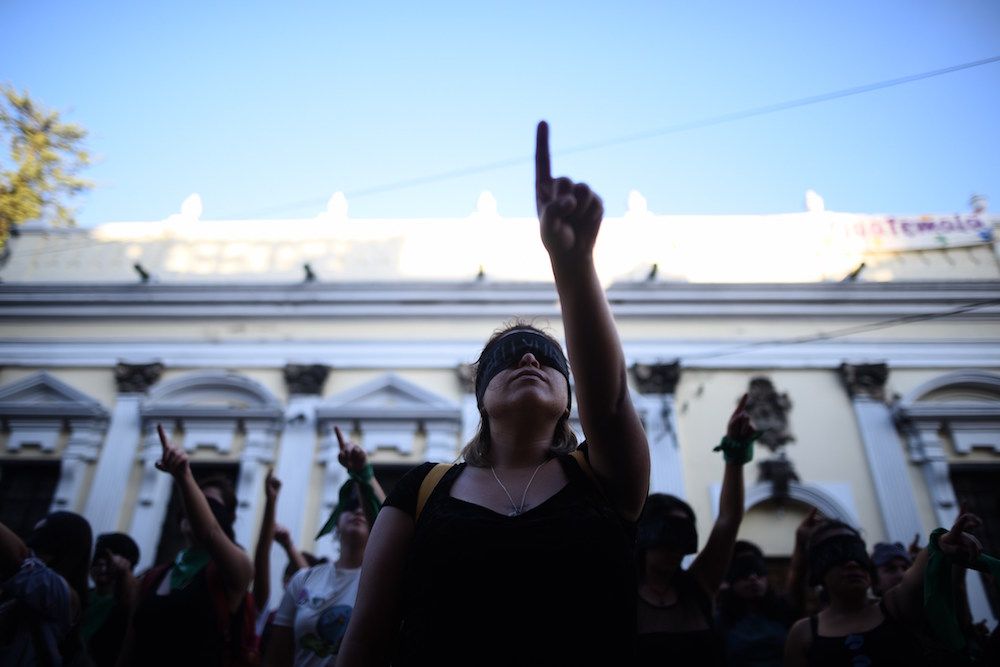 Women in Guatemala perform an adaptaton of Las Tesis' "Un violador en tu camino" ("A rapist in your path"). One of the lines of the performance goes, "Patriarchy is a judge who judges us for being born and our punishment is the violence you don't see." Photo: Edwin Bercian/EFE.

The fact that a little over 2,000 billionaires have a greater share of global wealth today than 60% of the world’s population presents an existential threat to democracy in many countries and to a peaceful and secure international order. Gaping social inequality fuels conflict, displacement and climate injustice, and interacts toxically with growing trends toward populism and authoritarianism. Human rights should be at the center of struggles for meaningful social change in order to preserve aspirations to a social order in which diverse people have equal dignity—which includes economic justice. But as others have suggested in this forum, for this to happen, human rights advocates need to disrupt some of our cherished certainties, develop new strategies and methods, ally with progressive social movements at national and international levels, and create new ways of doing and funding our work. And if we as human rights actors can better understand the progress we’ve made, we will be better able to deploy human rights strategies and tools more effectively in the face of these intertwined threats.

In my new book, When Misfortune Becomes Injustice, I try to contribute to a much-needed collective reflection by examining (self) critically what the human rights movement set out to achieve—and what we have achieved—in using economic, social and cultural rights (ESCR) to advance social justice, in relation to health in particular. Examining both normative evolution and empirical evidence, I argue that there have been astounding strides in legal standards in international and much constitutional law, together with recognition of the full humanity of a proliferation of populations, from women to LGBTQI populations to persons with disabilities. In turn the movement has transformed ideas of rights claims across public and private domains, and the procedures and mechanisms for enforcing them.

Moreover, these achievements have had far-reaching impacts not just on norms but in diverse people’s well-being and lives in practice. Just as no one forced to live under arbitrary authoritarian despotism thinks the rule of law is a sleight of hand, no one who is forced to live without essential public health measures or life-saving care thinks establishing health entitlements as claimable rights—from antiretrovirals to emergency obstetric care to abortion access—is a trivial accomplishment.

The steady march of neoliberalism has left enormous and gendered impacts on health and social (in)justice.

At the same time, the steady march of neoliberalism embedded in international and national economic governance has left swathes of misery, degradation and inequalities in its wake, with enormous and gendered impacts on health and social (in)justice. Further, it has changed the capacity and the very nature of the state from which we demanded increasingly more. The shrinking fiscal space, coupled all too often with the state becoming an agent of private interests, has fundamentally distorted the possibilities of using traditional human rights strategies to produce greater egalitarianism and social endowments, including in health. The paths for progress are increasingly predetermined: technological innovation together with private sector investment are the solutions proposed by the philanthro-capitalists that themselves structure our ecosystems of knowledge and action in global health. Indicators for both economic performance and global health are too often based on opaque algorithms that allow global bureaucrats to govern from a distance.

It is no longer enough (if it ever was) to just “name and shame” violations within the status quo without challenging the fundamental design of the global economic architecture. Nor is it enough to set out “human rights-based approaches” and their contradictions with dominant neoliberal paradigms. States are too often either complicit or shackled (or both) by macroeconomic and policy prescriptions that flow from increasingly intrusive economic governance. But fighting hegemonic assumptions about austerity and economic growth or the role of the private sector versus the state—which are embedded in laws and institutions within and between countries—require a different praxis of human rights.

Fighting hegemonic assumptions about austerity and economic growth or the role of the private sector versus the state require a different praxis of human rights.

Those of us in the human rights movement have fought hard to make extreme poverty not a “background condition” but a question of state obligations, and to expand the social contract to reach into the private sphere where women’s health rights in particular are often violated. Now we urgently need to go to the roots of inequality, which often lie in the global order. There is no reason that the social contract now be artificially limited to the geographic bounds of the nation-state, which is out-of-step with our hyper-globalized reality. Extra-territorial obligations (ETOs)—the notion that states’ human rights duties extend to their actions with impact abroad—depend not just or even mainly on crumbs of donor assistance from rich states, or even judicialization, but upon strengthening social mobilization and democratic law reform regarding the norms to control trans-boundary effects of state and corporate actions. As just one example, deregulation and trade and other regimes changed rules of economic governance, so they can be changed in progressive ways—for example, to capture the effects of cross-border tax evasion and to modify labor, intellectual property and environmental protections.

But that and many other challenges requires weaving human rights praxis—human rights for social change—into broader social movements, as well as working across disciplinary silos. The problems facing the rights movement are too complex for any one set of advocacy tools or any one field’s expertise. Of course, there is no single monolithic “human rights community” just as there is no unified “health and human rights community”. Those tropes are used from the “inside” to police the boundaries of orthodoxy and from the “outside” to caricaturize sets of actors and strategies. Yet, there are dangers of circling the wagons defensively around our professional tribes. The complexity of the challenges posed by by rampant inequality, the spread of authoritarianism and illiberalism, distrust in multilateralism, and climate cataclysm call for embracing justified critiques and opening up to new ideas and perspectives—and uniting with labor, environmental and many other social justice movements.

We cannot wait to figure out all the implications of experimenting with new approaches and alliances. There is an ethical dimension to the passage of time. When our world is literally on fire, business as usual is akin to fiddling while Rome burns. All of us in the diverse tapestry of overlapping actors in the human rights movement—scholars and advocates, North and South alike—must urgently find the tools and strategies that a genuine commitment to equal dignity with social justice on our shared and irreplaceable planet demands.