As long as states do not face pressure from their own constituencies, domestic refugee policy is unlikely to change.

Jim Hathaway paints a devastating picture of the human rights violations that result from today’s refugee response system. He positions this side-by-side with the original vision of the Refugee Convention: a world where refugees “lead an independent life”, where they can work and feed their families because they are “integrated in the economic system” of their asylum country.

His conclusion—that we’ve failed to effectively operationalize the Refugee Convention—is virtually inarguable. Then he asks, “What went wrong?”

This is the critical question. While Hathaway suggests a few answers, I believe the exclusion of a critical set of actors—those fundamentally able to and interested in holding their governments accountable to human rights standards—has led to this sharp divide between the Convention’s vision and the reality of refugee lives today.

Hathaway points to the attractiveness of camps as visible responses that are amenable to quick, “one-size-fits-all” rollouts.  He also posits that they may deter refugees from entering a country at all. (Camps also deter refugees’ participation in the social, economic and civic life of their asylum countries.) He links a government’s desire for such deterrence to its fear that refugees will remain forever, changing the demographic and political landscape permanently.

All of this is true—but governments are afraid of many things that subsequently become accepted norms. In my own country’s past, the government has been afraid of women voting, of black people using the same restrooms as whites, of gays and lesbians serving in the military or getting married.  Today, an African-American lesbian woman in the US can cast a ballot and enlist in the military on the same day—stopping in a non-segregated restroom on the way.

But these changes came about through the sustained advocacy of domestic NGOs dedicated to changing government policy. While outsiders weighed in on women’s suffrage, the civil rights movement and gay rights, change only happened after extended pressure by US residents, acting in organized groups to demand change.

In contrast, the movement for refugee rights is virtually unsupported, financially and otherwise, in Africa, Asia, and Latin America—the places where most refugees remain.

In most host countries, few if any mainstream human rights advocacy groups include refugees in their advocacy.

Many host countries lack even a single organization dedicated to advancing refugees’ human rights.  Compounding the problem, in most host countries, few if any mainstream human rights advocacy groups include refugees in their advocacy.  Few if any labor unions invite refugee membership or advocate for formalization of refugee labor, even though doing so would protect labor rights and standards for all workers. Similarly, few if any domestic policy institutions consider ways to turn the presence of refugees—which increases consumption and labor supply—into a win-win opportunity for both refugees and the local economy.

Moreover, of the billions of dollars invested in refugee response globally, only a tiny fraction of this supports domestic NGOs advocating for refugees’ human rights in Africa, Asia and Latin America.

Given all of this, can we really be surprised that the Refugee Convention, which sets forth refugee rights, is not effectively operationalized? Hathaway envisions a system of “common but differentiated responsibilities”, where refugees are received in one state but may then be moved to another with greater resources. As a result, states have an opportunity to share costs and space associated with refugee residence according to an impartial formula that forces equity.

In this vision, at least some refugees would be forced to uproot a second or even third time—potentially immediately following prompt processing, and potentially again after five to seven years. (Since protracted refugee situations today average 20 years, many refugees will not go home within seven years.)

How many refugees will face this recurring upheaval? Would most refugees consent to this, if offered a choice between the current status quo and Hathaway’s proposal? Does Hathaway’s vision result in sound public policy? Will significant numbers of refugees choose to live or move irregularly rather than accept this new global scheme?

It’s hard to imagine that refugees who anticipate upheaval after seven years will invest in their host communities—learn the local language, grow a business and create jobs—if faced with the prospect of leaving everything behind again. On the other hand, most refugees today live with similar uncertainty, if not worse. 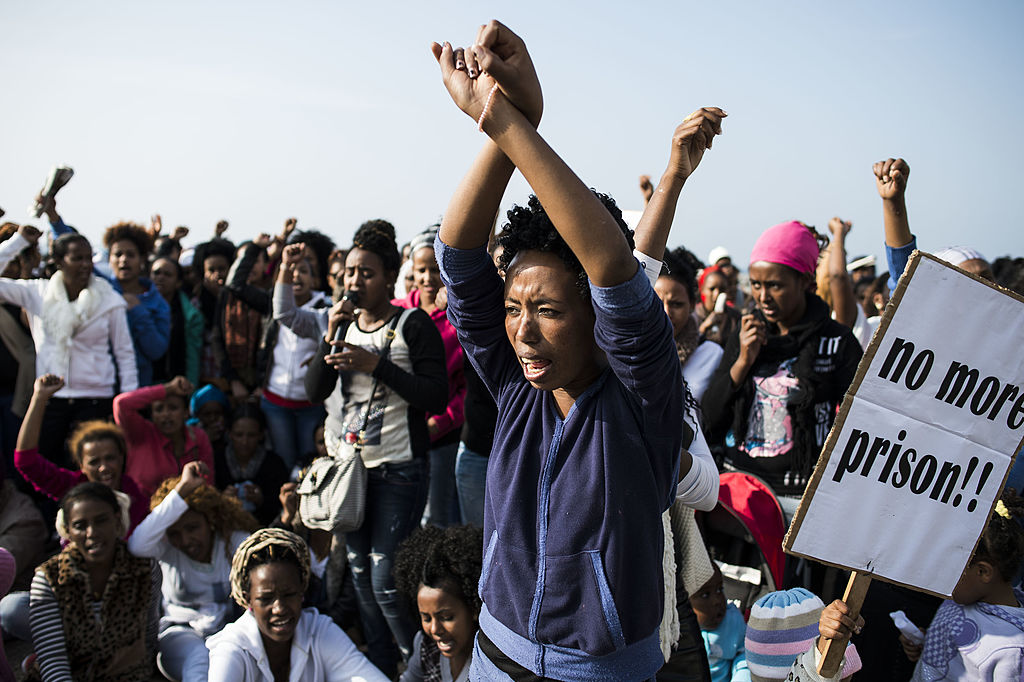 Asylum seekers and their children demonstrate on January 15, 2014 in Tel Aviv, Israel.

Whether we embrace Hathaway’s vision of a collective agreement among states, or continue with piecemeal efforts to get individual states to honor their Refugee Convention commitments, we’re left with a similar underlying problem: getting states to implement domestic policies that grant refugees their rights is a stubbornly intractable challenge.

Predominantly, this is because states do not currently face pressure from their own constituencies. To get governments to agree to Hathaway’s plan—or to achieve any other change in government policy that would result in greater operationalization of the Refugee Convention—requires advocacy.  And it requires that such advocacy be conducted by those who have the connections, contextual knowledge and sustained interest to achieve policy reform. Those people will inevitably be locals—citizens or other residents who push their governments to adopt better policies toward refugees. They may even be refugees themselves.  While they often have less political power than other residents, refugees have strong, sustained motivation to achieve such reforms.

Local organizations must be funded to develop and promote policy recommendations, to campaign for legislative changes, to provide technical assistance in drafting better policy frameworks. Outsiders alone cannot do this.

Outside recommendations are simply too vulnerable—to charges of ignorance of local context, to political maneuvering for increased foreign aid or investment, to implementation failures as soon as global attention shifts elsewhere. Outsiders inevitably will miss leverage points and sticking points, simply because they are outsiders. The type of sustained political pressure needed to enact policy change—on any issue—has always come at least largely from within.

Hathaway’s vision of shared global responsibility is no exception. Getting states to the table to discuss shared responsibility, and holding them to their commitments once made, will only happen with the support of local advocates—pushing, cajoling, arguing, dragging their governments over the hurdle of fear and into a world where all states are invested in ensuring that refugees can live safely, move freely, work and feed their families, and rebuild their lives in a safe new home.