Are presidents who seek to withdraw from the ICC in denial about a rare instance of achieved gender equality?

Paradoxically, while the recent spate of withdrawals from the ICC further highlights the difficulties of having a truly international criminal justice project—which we already knew when the USA, China and Russia failed to sign up—it is, in key respects, an indicator of recent ICC successes. The withdrawals suggest that the ICC is becoming increasingly credible and successful in destabilizing and disturbing not just the fog of impunity but also the quagmire of patriarchal gender relations.

When Gambia joined Burundi and South Africa in announcing its intention to leave the International Criminal Court (ICC) two obvious interpretations sprang to mind. Either such withdrawals might indicate a pre-emptive “quit before they get hit” maneuver, tantamount to an admission of guilt before even being charged for past crimes, or, alternatively, they represent a simple tactic by the failing leaders of failing states to divert attention from present poor governance (former Gambian President Yahya Jammeh’s attempt to forget his own promise to honour the outcome of presidential elections being a useful example). A third and more intriguing explanation is that they represent male flight from a rare instance of achieved gender equality in the form of the current Chief Prosecutor of the ICC. 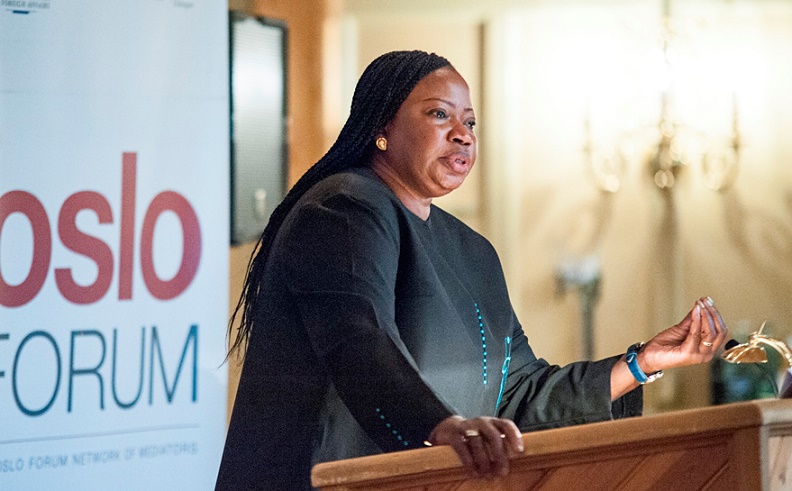 ICC Prosecutor Fatou Bensouda in 2012. Bensouda is from The Gambia and had provided legal advice to Colonel Yahya Jammeh until—reportedly—he fired her in 2000.

There is little doubt that Gambia’s Yahya Jammeh, Burundi’s Pierre Nkurunziza, and South Africa’s Jacob Zuma have long demonstrated a shared discomfort with the rule of law, exemplified in—amongst other things—seizure of power, extension of terms of office by force, unanswered allegations of arbitrary arrests, torture and killings, and assisting an ICC indictee to elude the not so long arm of international criminal law. It might be a step too far to argue that all three could be guilty of the war crimes, crimes against humanity and genocide that the ICC concerns itself with. Yet it is becoming increasingly difficult for such leaders to ignore the reality of an International Criminal Court and the need to factor this into their own survival calculations.

It is becoming increasingly difficult for such leaders to ignore the reality of an International Criminal Court and the need to factor this into their own survival calculations.

When in the dying days of the Yahya regime the Gambian government played its populist card and stated that the ICC stood for the “International Caucasian Court”, I momentarily wondered if they even realized that the former Argentinian (and Caucasian) ICC Prosecutor, Luis Moreno-Ocampo, is long gone, replaced by Ms. Fatou Bensouda in 2012. But of course they had to know: Bensouda is from The Gambia and had provided legal advice to Colonel Yahya Jammeh until—reportedly—he fired her in 2000.

Why, then, can such leaders not bring themselves to acknowledge and support Ms. Bensouda, despite her being one of the continent’s most influential personalities? Is it because she has prioritised gender issues, notably conflict-related sexual violence? Is it because—despite historically uneven patterns of investigation and prosecution and some unfortunate decisions of the first Prosecutor, and despite not having any powers or capacity to arrest suspects—the ICC is now showing increasing adeptness in dealing with contextual specifics, as well as providing normative leadership on critical issues related to its mandate? Or is it, perhaps, all these thing plus the threat posed to their masculinity by a woman who, unlike them, operates on an international rather than a merely national stage? If Bensouda were a man, would any of the “Old Boys” club of long-stay presidents have dared to imply that “he” was part of a Caucasian conspiracy? In short, is their decision to exit only a flight from justice—or is it also a negative reaction to a rare instance of achieved gender equality?

There was, no doubt, a lot of merit in critiquing the possible racism and obvious political clumsiness that marred the previous ICC prosecutor’s pursuit of only African cases. But the way in which these three countries chose to time their withdrawal (just as the ICC considers opening an investigation into events in Afghanistan) raises many questions about whether Ocampo’s decisions were their real motivation for doing so. Why didn’t they leave during that painful decade when the Prosecutor was actually a Caucasian man whose responsibility for the ICC’s early errors of judgment is not in question?

In the absence of any definitive answer to that question, it is obvious that these three leaders have been falling back on one of the oldest, cheapest and most boring populist tricks in the book—and the one that works best with domestic constituencies kept malleable by failures in development and governance. Do they really believe nobody will notice that this argument has long been superseded by events? Or do they think we have all forgotten that African leaders were strongly supportive of Bensouda’s appointment as Prosecutor?

What is at play in these latest ICC withdrawals is a tacit admission and visible demonstration of state failure, to which the grotesque individual gender incompetence and macho insecurity of the leaders concerned is likely a contributing factor. Worrying though all this may be, with some politicians already spreading rumours of a mass withdrawal from the ICC, it also offers an important indicator that the ICC, under the leadership of Ms. Fatou Bensouda, is finally gaining some teeth.

Looking forward, the several other countries whose leadership enjoy occupying the long-stay and all-male presidential parking yards of the continent would do well to remember that, just as taking a post-coital shower is not really effective prevention against HIV, so running away from the ICC is not a long-term guarantee of impunity. Indeed, the longer such countries display their inability and unwillingness to see war crimes, crimes against humanity and genocide prosecuted, the more the ever-sharper teeth of the ICC will have to chew on. They might also want to recall that, under the complementarity principle of the Rome Statute, establishing plausible domestic courts that are able and willing to prosecute international crimes—as Uganda has already done—might be a smarter and more persuasive pre-emptive move than withdrawal from the ICC.